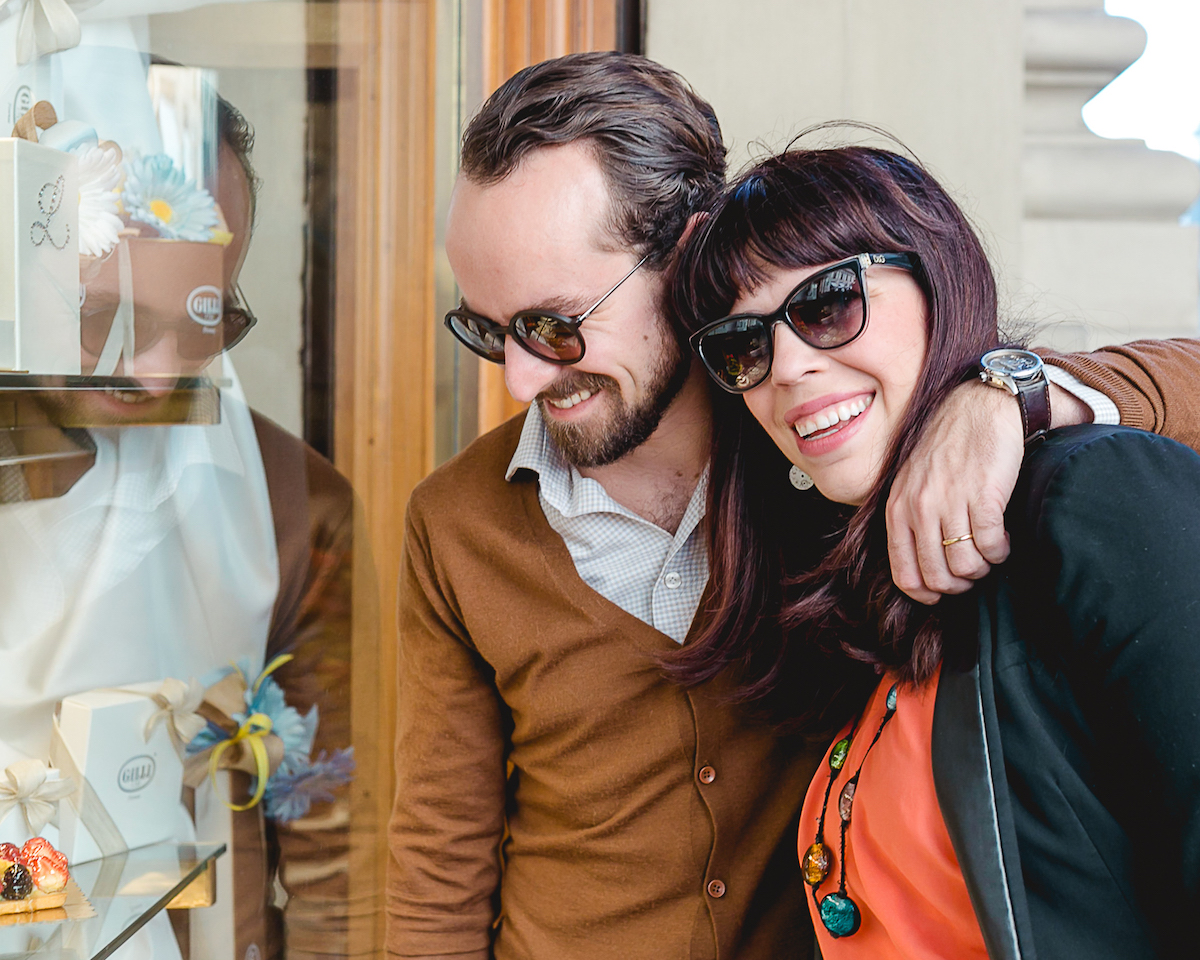 From Florence With Love, A Personal Story

I was only twenty-one, fresh from Los Angeles on a bustling flight with what would be my fellow students for the full academic year. Upon touch down was our first experience with September humidity and public transportation. We were put into lodging for a week in a small hotel near Piazza della Liberta, deemed a sufficient time to not only find an apartment but people you actually want to live with. I knew not one person before getting on that plane. I have to admit that upon first thought, I thought I made a mistake.

Crammed into a dusty tiny hotel room with a girl I hardly knew (who later become one of my best friends) and missing this life I’d cultivated in Los Angeles. What was I doing there? Italy was dusty, loud, a strange-language permeated my brain in an incomprehensible way. At the time I was newly single too, instead making out with musicians in Malibu or sneaking into the back entrance of a dive bar on Sunset blvd. with my friends. Here I was in Florence on a year abroad like so many before me, and so many after. Just 24 hours before I had packed up my entire life in two suitcases in under an hour after going on one last hurrah with friends in L.A.

This might have accounted for the fact that I had no way to brush my teeth or any decent shoes, but I was quite an impulsive person that year and 2005 was a life-changing one at that. I was on my third-year of university and I had just returned a month before from a two-month teaching trip from Huzhou, China. A period spent working six-days a week in a huge non-air conditioned school with seven other female teachers and in our free-time I washed my clothes in our hotel bathtub.

There was no phone or WiFi, just a once-a-week trip to a smoke-filled Internet cafe where people would stand behind me (out of curiosity) as I wrote out perfunctory emails to my friends and family. Sure I was terrified at first. I’m a girl who grew up with not a lot of anything in Texas. Los Angeles was still a huge life change but in those two months in China I grew up, but by this time I needed to have some fun.

I was told I couldn’t “do both” teach English in China as a special invitee and study abroad because I had to send my passports to the various embassies for approval but I didn’t take no for an answer. I wrote letter after letter asking for a double passport, as businessmen often were awarded, so I could get my Italian visa approved while I went to China. It was a hair-raising time and I almost didn’t get my Italian visa but lo and behold at the 19th hour it all worked out.

This wasn’t supposed to happen by the way.

I was supposed to be in London, after a whirlwind trip with my dad and my closest cousin a few years before, I deemed it the place for me, guys with BBC accents included. However, as fate would have it, Italy was where I could study, everyone else studying something smartly related to art with a few of us knob-heads opting for political science, this still makes me laugh.

My year was probably similar to most people’s study abroad experiences albeit with less WIFi, our school was the only place where we could regularly access it. I made some great friends and learned the basics of Italian. What changed my experience during study abroad was making that extra attempt to meet Italians and not stick to solo friend groups in my school. Yes this wasn’t easy, but it meant I had friends to drive me to thermal springs in the middle of Tuscany and hang out with on a Saturday night. I stumbled through the Italian language as awkwardly as one fateful evening in a pair of heels in Santa Croce.

Our first Fall break, with five other girls we crammed into a self-rented van in Barcelona where I drove us all (naturally being from Texas, I could drive manual) around Spain with just a crappy map and a group of girls who didn’t always get along. We laughed, we cried and had experiences one can only have in a cramped car ride in a foreign country. Back “home” in Florence I met a guy, I visited new cities and as the year slowly winded to an end, I felt like Italy was something I had been waiting all of my life for. It was the Beatrice to my Dante (couldn’t help a local reference) thought without the dying at the age of 24 unrequited love issue.

Life here meant that finally I had the chance to walk on the regular as I was that weird person who used to stroll in Burbank on my own with a coffee. To be surrounded by such glorious history, a beautiful language that forever meant I speak with my hands, and finally come to terms with the facts that carbs were indeed pretty damn good helped finalized these decisions. I’ve met some of the best people I will ever know here. Whether they stayed or not was irrelevant, as I’m pretty grateful for whatever time we did get to spend together. Thank god for the internet.

Flashback to today, nearly 11 years later (I did go back to L.A. to finish my degree before returning). The way I feel about the city has changed that this has been my home for a decade. For most of my twenties during the painful life choices such as “what the hell am I going to do for work,” devastating breakups, saying goodbye to friends, feeling lost and falling in love again. It’s here where I went through those changes, figuring out that being a jack-of-all-trades isn’t really going to get me anywhere. Eventually you have to wise up and get somewhat serious because depending on someone else isn’t a good idea.

Florence isn’t for everyone, actually it isn’t for most people.

Out of my program there were only two of us who made a life out of Italy. Most enjoyed their time here but moved back to California. When I came back the second time, I saw met even more people who’s dream it was to live in Firenze and yet moved back two, three or five years after they got here.

How ever if you are here, it’s an easy country to live in a bubble of pure survival, which is necessary, but that at some point also allows you to take chances. If you don’t have much to lose in the first place, why not try. I’ve fallen in love in and out of love with Florence a few times. I’ve cursed it’s provincial attitudes and noble past only to come crawling back to amore mio, where every single day I smile as soon as I look out of the window. I’m extraordinarily grateful for this place, the crowded streets, the many tourists, that’s all fine with me. Plus my love for fresh pasta, seasonal veggies and superb restaurants has only increased. If I’m not actually eating, I’m pretty much thinking of my next meal.

In fact to show the visual prowess this city has, here are a few photos by my friend Christine Juette, a talented photographer from Berlin who came to visit and was nice enough to snap a few photos of our family (see cover shot). With her talented eye, she captured what I adore about this place.

Something that maybe I’ve only recently understood about myself is that I wasn’t meant to have a life that was necessarily easy. (though I have days where I wish it was). It’s like having an annoying stubborn child that lives inside of me that craves a damn good challenge. I met my husband here, who loves Italy as much as I do and managed to probably integrate more successfully I can painfully admit. Example one: yesterday in French class, when the teacher asked if any of us were going to celebrate Valentine’s Day, my Italian fellow students groaned and said of course not.

That stubborn inner child in me cropped back up again as I defiantly burst out oui, pourquoi pas (yes, why not), Valentine’s day doesn’t need to be an expensive commercial declaration of love. Why not make it another day where you find what it is you love about a place, a person, a favorite hobby. Frankly, we could all use a bit more positivity in this world of dramatic news headlines and depressing statistics, I’m literally frightening of the “breaking news” jingle on my iPhone. So tonight, despite the daily stresses that have consumed life at the moment, I plan to do exactly that. All I need is my Frenchman, a bottle of Valpolicella rosso and a needy beagle.