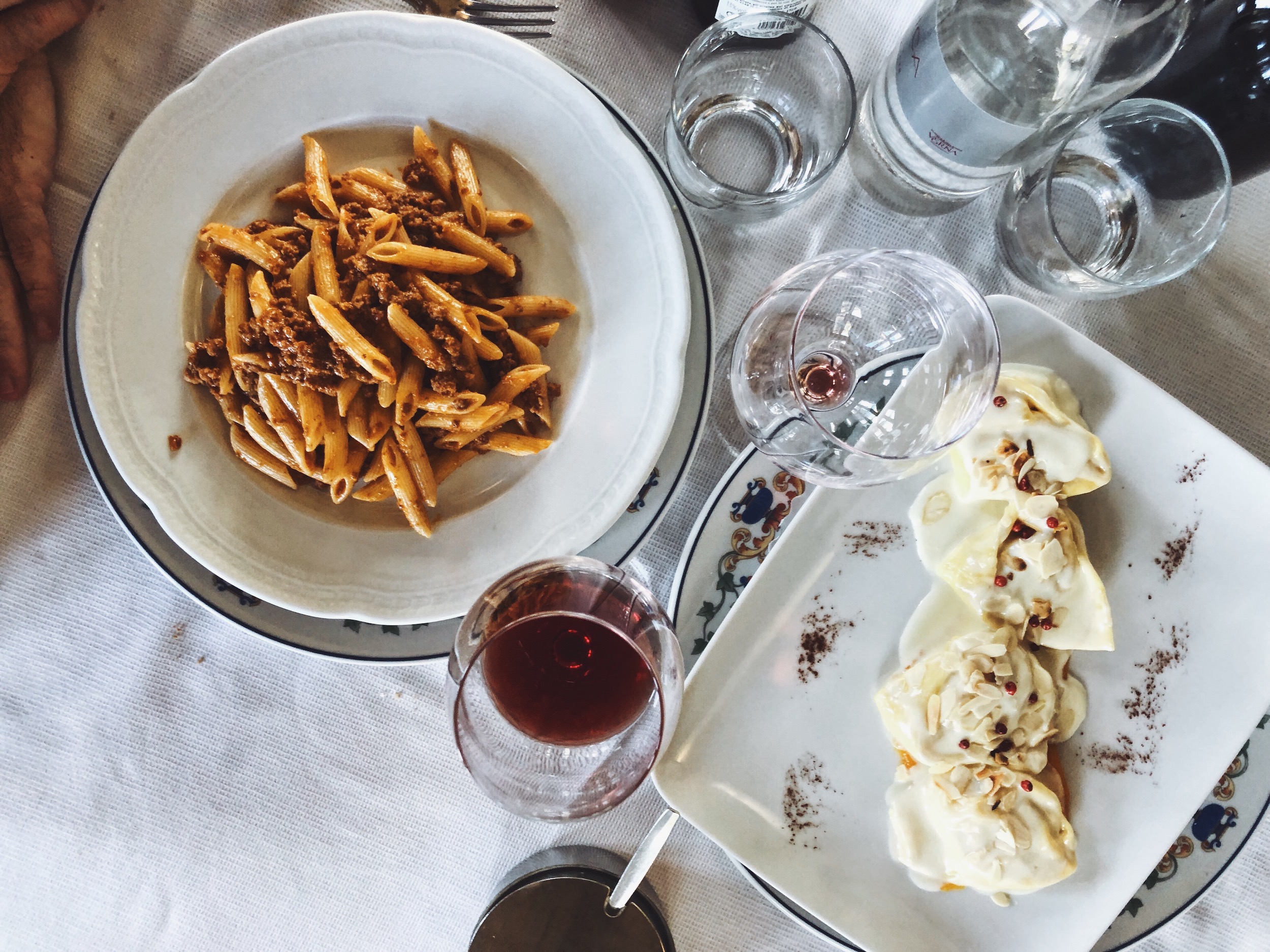 If you ever want to destroy the heart of any true Italian who is passionate about pasta, take them to a 19-year old’s apartment in Los Angeles.

It’s already doubtful that said teenager would actually eat any carbs (not even potatoes!) but when they do it’s almost always a rage-inducing hot mess.

I was that 19-year-old in 2004 and when I would make pasta it consisted of dumping  the noodles in before the water boiled, forgetting that I did that and thus cooking those poor, poor noodles until they all clumped together in a sticky mess.

And pasta sauce? Brace yourself folks. I loved the affably named “Prego” in every local supermarket. No one knew what the Italian word actually meant but you could be assured that each bottle contained 765 ingredients, none of which a live human can pronounce. Since I added ground beef and onion, that that meant I thought of myself a true cook, a little garlic powder and soon enough Corden Bleu would be knocking down my door.

And then I moved to Italy.

This country might be known for its incredible cultural heritage: The Colosseum, the Uffizi, Michelangelo’s Sistine Chapel and the ruins of Pompeii and Herculaneum. Just as synonymous thought is its culinary heritage – preserved and cherished the world over. Not just pasta of course (I bristle when tourists assume that’s all people eat, NO) but it is an important part of local cuisine.

It’s safe to say my knowledge of Italian food was nil to embarrassing before moving to Florence, first as a student and then as a confused young adult. The first week of study abroad I discovered “aperitivo” free food buffet with a drink? Sign me up and I regularly bought Nutella and fette biscottate – the toast-like crackers that practically crumble when you gaze upon them. They are just as terrible and tasteless as they sound and are often appropriately served at the hospital for breakfast, but even your couch will taste good with Nutella.

Pasta as you can imagine here, was on an entirely different level. Gone were the days of overcooked mush and one type of sauce It was like a revolution in what I thought of in terms of food at every level. The myriad of pasta shapes, the seasonal sauces, the joy in making your own using fresh, well-sourced ingredients. 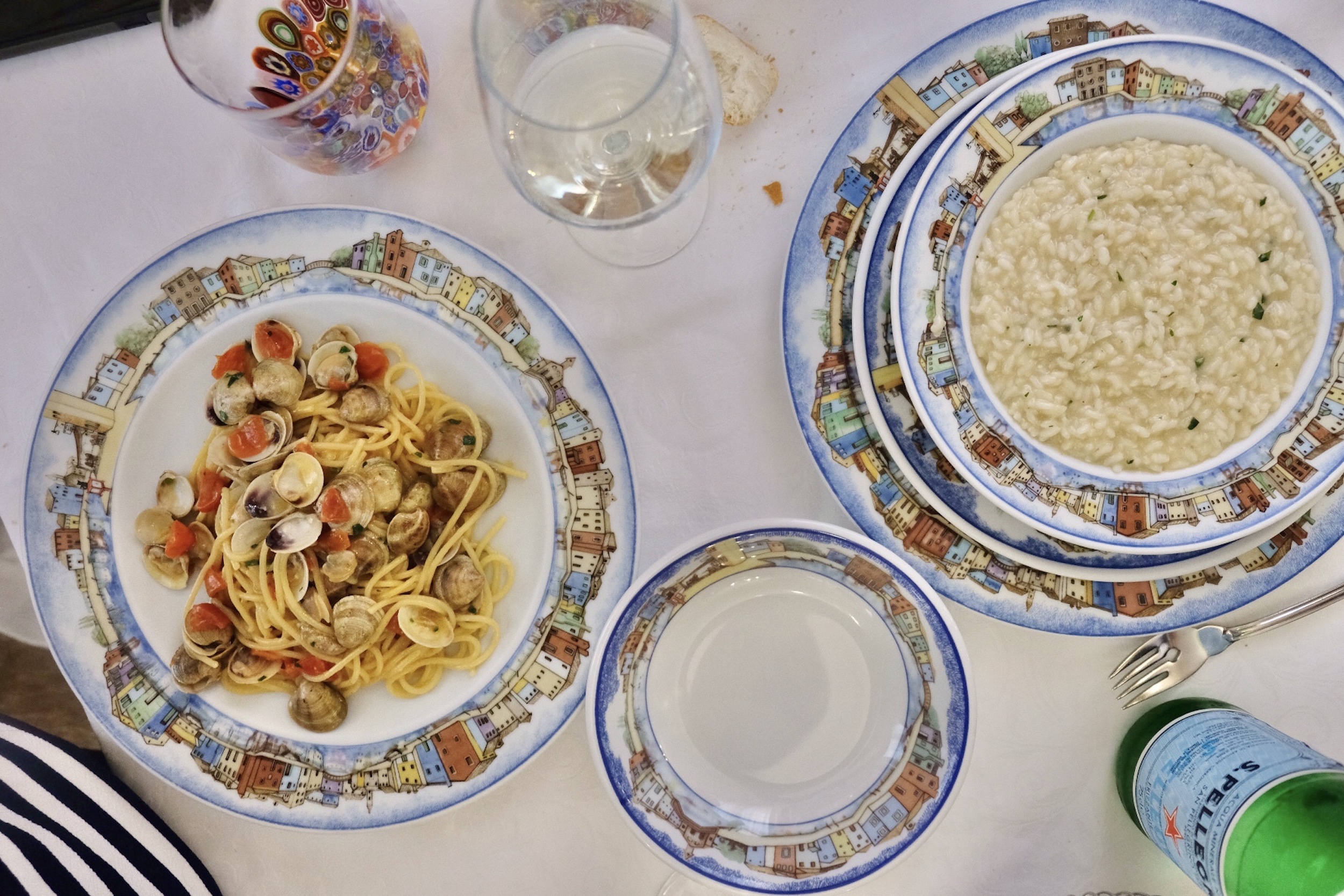 It is safe to say that life here has changed me for many different reasons but also that I accept carbs and pasta not as my enemy, but as my beloved friend – to be cherished.

Since it’s Valentine’s Day and I have some time to kill before going to Venice with Nico, I thought, why not sure a love letter to pasta bella pasta before making my train.

Pasta is Versatile, Supportive and Fun

Gone are the days where I thought “meat sauce” or Alfredo were the only pasta toppings one could enjoy. The thing about pasta is that it is incredibly versatile. From the egg tagliatelle served with fresh truffles shaved on top, creamy cacio e pepe piled on your plate in Rome to clams and parsley tossed with EVOO on a plate of spaghetti on the sea. The list goes on and on and in my opinion it’s impossible to get tired of eating because of this fact.

Pasta also doesn’t judge you. It accepts that you are who you are and loves you back. It doesn’t shame you for wanting to eat it twice in one day nor does it politely suggest you try keto. Pasta is the friend we all need on the day we find out how much taxes we will pay as freelancers for the past year and it hugs you back.

I should also mention, in terms of versatility is that pasta makes a great craft projects for kids. When I was a nanny, we used pasta for so many art projects and even made Christmas tree ornaments from penne (make sure to pronounce that second “n” here in Italy or you risk saying penis). Farfalle or bow-tie shaped pasta to dapper up any item, pasta wheels to make into necklaces, the list goes on and on and I’m sure Pinterest is mecca for ideas.

Unlike many of us who despise whatever given shape we’re supposed to be (pear, apple, hourglass, shot glass?) pasta does not have that common hang-up.  According to Italy Magazine –  It is estimated that there are approximately 350 different types of pasta – and about four times that many names for them! There are long, short and soup shapes or cylindrical, solid or hollow, rectangular or rounded. 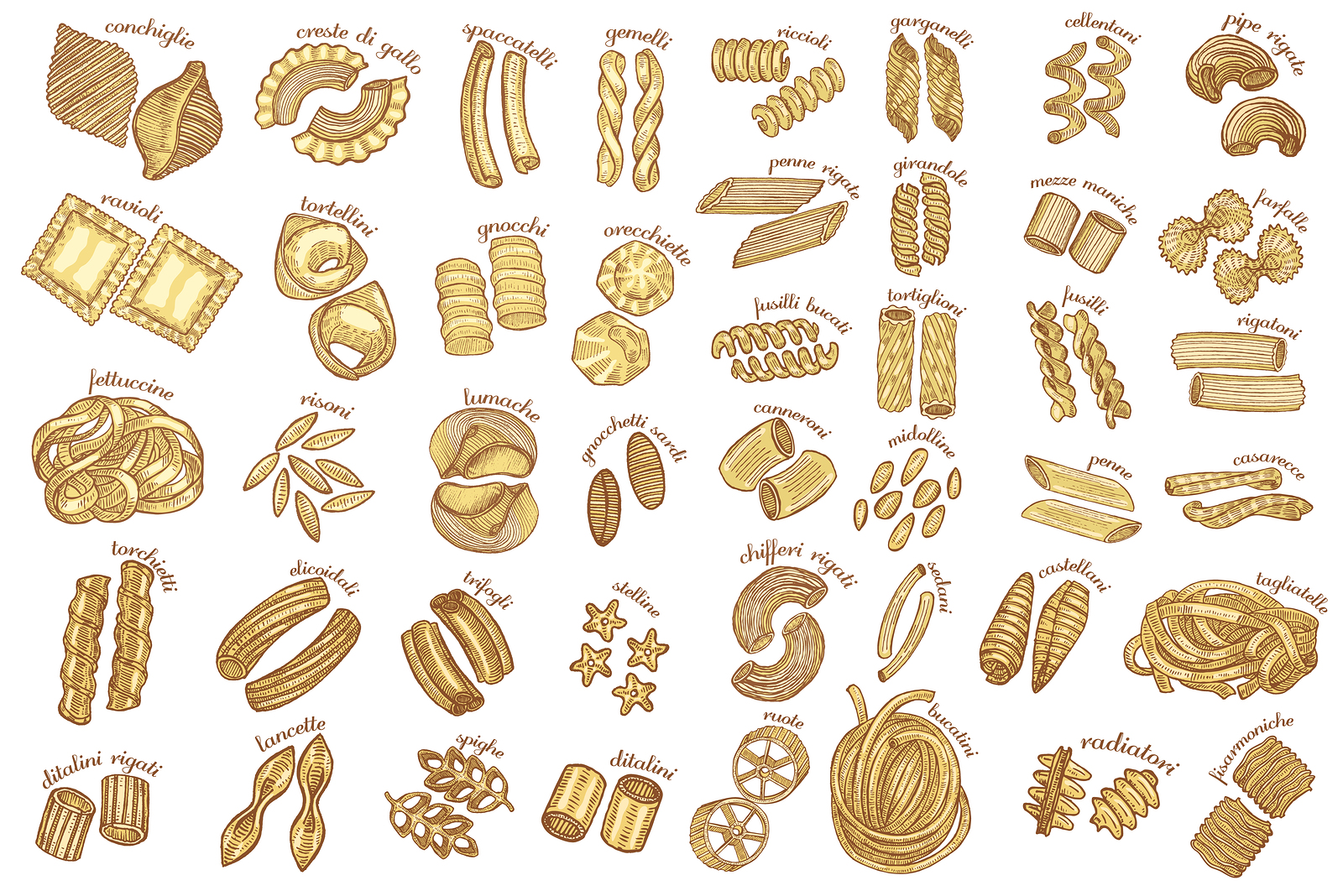 The reason for the many designs is to choose the one that holds the sauce in the best way possible, and like many things in Italy – the type depends on the region. In our beloved Liguria, they are well known for twisty trofie (for pesto) while in the Siena countryside the thick tube-like “pici” go very well with wild boar ragu.

Don’t even get me started on orecchiette (or, ‘little ears’) are from Puglia, the pasta ladies of Bari have been setting up shop in the city’s backstreets churning out this pasta for many years and who are even fighting to keep their culinary heritage alive today.

I’ve been in Italy for almost 12 years now and when I leave on vacations or work trips, I have thoroughly become “Italian” in the sense I rarely order pasta outside of Italy. That doesn’t mean that there is not good pasta outside of Italy, of course there is, it’s just us being stubborn and going without until we return. Even the average autogrill on Italy’s busy highways can serve me pasta that isn’t overcooked most of the time.

Naturally the second we get home and I ask Nico what he wants for dinner it is: pasta or baked pasta, he never varies or asks for anything else. It doesn’t matter if it’s simply store bought linguini tossed with a little panna, lemon and parmesan, tortellini al brodo or even a simple spicy tomato sauce – we always sigh with happiness at the first bite because it feels like home for us both, and neither of us were born in Italy.

Italian cuisine has much of its history rooted as “cucina povera” or peasant food that meant locals had to do the best they could with what they had with very little extra spending money. This is why so much of what we eat here is seasonal and regional.

Yes, globalization has hit this country but there still is a strong desire to preserve local traditions when it comes to food. Pasta as a beloved “primo” is still an affordable option for students, schools, business people and travellers alike. At least it should be. You can find pasta that is very expensive in terms of ingredients (hello holy truffles) but often enough you’ll find it a very cost-friendly options from North to South.

It has inspired the concept of Pasta Grannies

“When you have good ingredients, you don’t have to worry about cooking. They do the work for you.” – Lucia, 85

I spoke about the pasta ladies of Bari before but they aren’t the only people churning out fresh pasta on the daily. You also need to know about Pasta Grannies who gave been around since 2014. This Youtube channel with around half a million subscribers has introduced the world to hundreds of nonne (in their 80’s and 90’s) from around Italy and the diaspora. They show off their skills making pasta by hand, honed over decades by cooking for family and friends and tells their personal stories. They have been profiled in major publications: NY Times, The Guardian, and we even interviewed the British creator Vicky Bennison earlier this year on Italy Magazine.

They even have a cookbook that apparently has sold out at many bookstores and I’m apt to pick it up myself. Read more about it here.

If you need advice on where to eat pasta (and not only) in Florence check out my suggested list of local eateries here (updated for 2020) and in regards to cooking classes, here are a few recommendations. Juls’Kitchen in Colle Val d’Elsa is always a top recommendation, a class with artisan bakery Pasticceria Buonamici, Curious Appetite for local activities in Florence,  a food and wine retreat with cookbook author Emiko Davies.