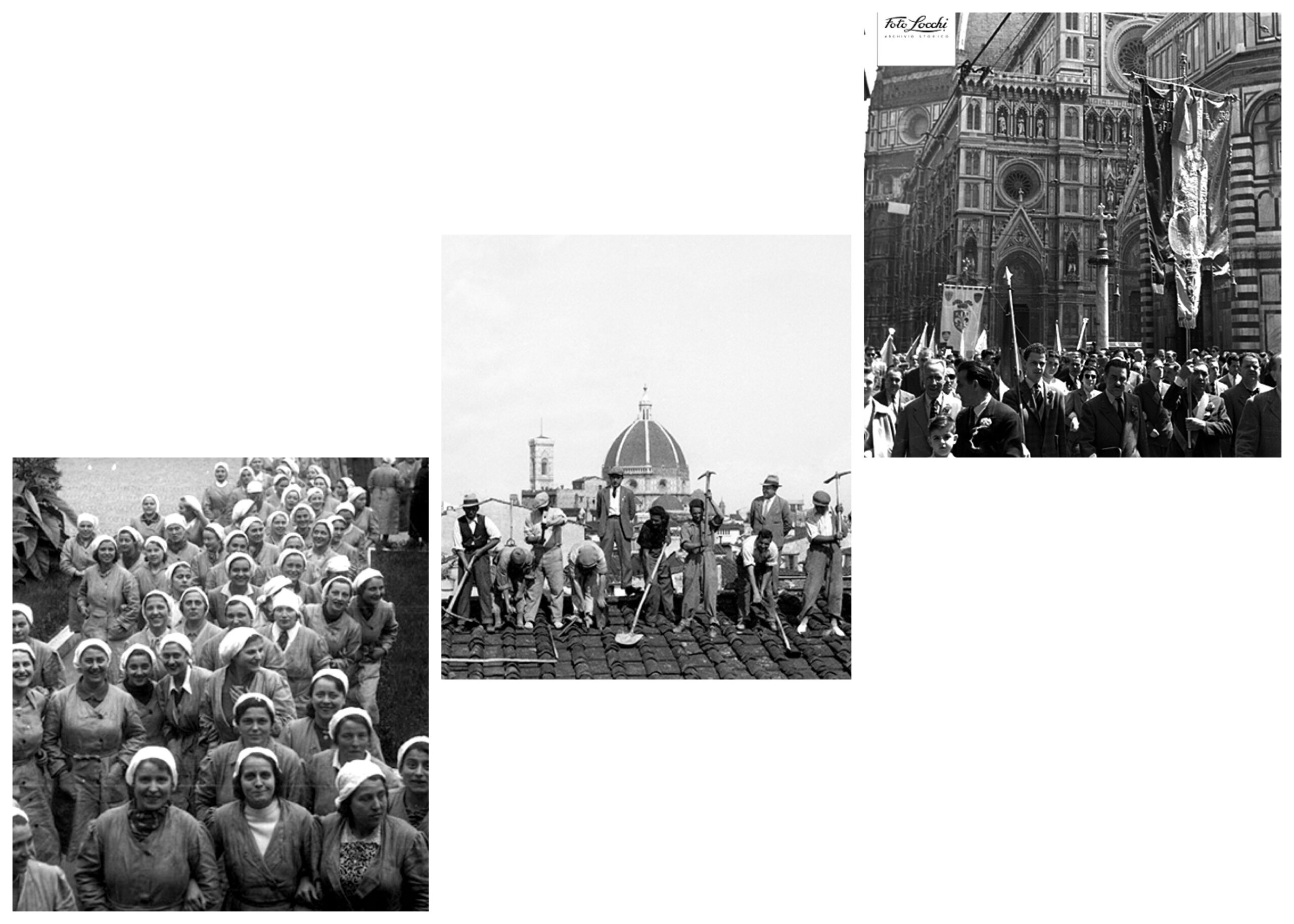 Celebrating Labor Day in Italy – A Historical Look in Florence

May 1st in Italy is Labor Day, also known as “Primo Maggio” or Festa dei Lavoratori, a nationwide holiday in Italy celebrating and recognizing the working-class workers’ struggles to reduce the working day to eight hours, regulate the work of women and children, improve wages, work contracts, and legalize the right to strike.

2020’s celebrations are decidedly a little different. Expect no festivals, demonstrations or parades as we approach the end of phase one of Italy’s lockdown. There will be, instead, a massive May Day concert on Rai3 titled “Work in Safety: to Build the Future” organized by Italy’s labor unions featuring big names like Vasco Rossi, Gianna Nannini and Zucchero.

What’s next for us? Well, we are on our way to cautiously step into phase two of “living with the virus” in Italy come Monday, the 4th. The news of the day is that restrictions in Tuscany have been lifted in regards to walks outside starting this May 1st. A chance to spend a little more time outdoors for weary Tuscan residents who have spent nearly two months indoors.

The uncertainty of the post coronavirus world weighs heavily on many on this primo maggio, especially in regards to the impact that this ongoing health emergency will have on the world of work and the importance of keeping people safe while working – ie: providing proper PPE and social distancing conditions. Check out this tribute to keyworkers around the world on The Guardian.

This year workers are ever more in precarious circumstance both because of the coronavirus but also because of enormous economic blow the likes that Europe hasn’t seen since the second world war. People are expected to work from home while also home-schooling their children and many jobs have been wiped out completely.

Today May 1st is International Labour Day, Workers Day. A time to celebrate all workers and their efforts worldwide. Now today so many workers are united in fighting #Coronavirus I have chosen to also remember past struggles from workers here in the UK #InternationalWorkersDay pic.twitter.com/hcROAIli3s

On this Labour Day, let's salute the tremendous effort being put in by our essential service workers. This lockdown has badly hit the people who build our cities. Let's all do our bit to ensure they can have a dignified life and work.

The general secretary of CGIL (the Italian General Confederation of Labor) Toscana, Dalida Angelini wisely noted “In this pandemic, work has been hit hard on one hand; on the other, it is thanks to the work of those who have not stopped that this country and our region are still standing. It is clear, there can be no work without security, including security for their health “.

The question continues to remain of how can organizations and governments contribute to build a fairer, securer, a much better, and more empathetic world for the working class.

This thought is better amplified with the words of the following two great men (source) —  that of the late President of the Republic dubbed “The People’s President” Sandro Pertini who once said: “I believe in the Italian people. They are generous, they are hard-workers; all they ask for is a job, a house and to be able to look after their loved ones. They’re not asking for heaven on earth, they’re asking for what all people should have.”

Also the words of Primo Levi hit home ““If we can accept those isolated and miraculous moments fate can bestow on a man, loving your work (unfortunately, the privilege of a few) represents the best, most concrete approximation of happiness on earth. But this is a truth not many know.”.

The original text of Pertini’s quote

From the congress of the International Workers’ Association – the First International – meeting in Geneva in September 1866, a concrete proposal resulted: “eight hours as the legal limit of working activity”.

In 1889, it was decided to dedicate one day of the year to work and to workers around the world; the date was set for May 1, in memory of an event that occurred in Chicago three years earlier, the Haymarket affair.

On May 4, 1886, what began as a peaceful rally in support of workers striking for an eight-hour day and in reaction to the killing of several workers the previous day by the police turned into a massacre and a riot.

An unknown person threw a dynamite bomb at police as they acted to disperse the public meeting. The bomb blast and ensuing gunfire resulted in the deaths of seven police officers and at least four civilians; many others were wounded.

In Italy , as soon as news of what happened in Chicago spread , the people of Livorno Tuscany turned first against the US ships anchored in the port, and then against the Police Headquarters of the same city. Only after decades of workers’ battles and union struggles, was the eight-hour working week established thanks to the Royal Decree-Law n. 692 of 1923 .

A Historical Look at Workers in Florence Via Foto Locchi

As I did for April 25th, Italy’s liberation day, here are a selection of historical’ photos showing Florentines at work from the Foto Locchi Archive in Florence. They were generous enough to let me share these wonderful historic shots in honor of this important day.