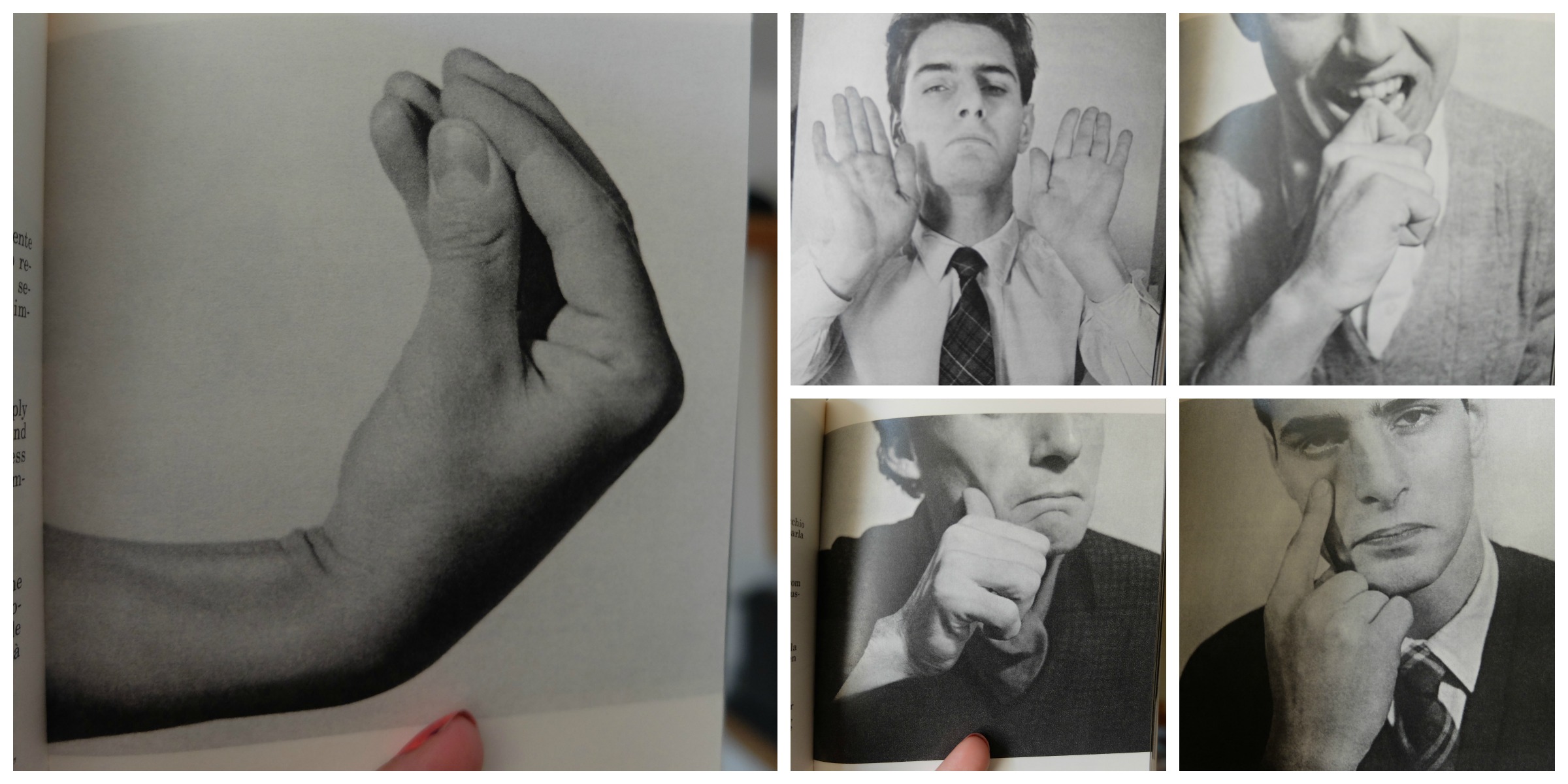 How I almost lost my native language

Who needs silly words when you have a plethora of gestures to choose from, Reason #24436726762 to love Italy!

He’s just being a ‘rompe palle’ (A pain in the ass). You might wonder why I am essentially calling someone a ‘not to so nice name’ but it’s not aimed at anyone in particular, just an example of how my language skills have evolved after living in Italy for eight years. “You know I can’t really explain how it works, e’ un po.. cosi” (it’s just.. like this).. yet another sentence that often pops up in my vocabulary, which has now become peppered in a sort of semi-ridiculous mix of Italoenglish that I don’t think I will ever shake. Especially if I remain in Italy for the rest of life.

Our blogger roundtable this week {which happens to have a pretty nifty new name & logo you can enjoy here} is about Italian language, something I have touched on before on the blog via uncomfortable Italian words you should avoid. This time I wanted to think about how learning a second language (and attempting a third) is starting to seriously mess with my native language, inglese americana ;-).

Exhibit A. : This past Christmas at a nice restaurant in France the waiters were positively bewildered when listening to the spectacle that is a normal conversation with my boyfriend (who is French but lives and works in Italy), his parents and myself, a mix of French, Italian and English that even took my brain for a spin at the end of the night.‘ I’m pretty sure they thought I was ‘special’ sitting at the table stuffing myself with cheese while they chatted happily in French while I patiently waited for Nico to translate, of course which we then merged into our special blend of Italoenglish to confuse people even more. I dream in both Italian and English and I can say an impressive amount of curse-words in all three languages which I am pretty proud of.

Exhibit B. I am only admitting this because I like to keep it 100% real on this blog, once in a while I will catch myself saying things like ‘I am going to go make a shower..’ Which makes sense if you’re Italian since the verb ‘fare’ {to make} is what you use when performing this action. The reason I know this is because when I was a young American student discovering the art of dating in Florence, one of my soon-to-be-nonexistent suitors sent me a cringe-worthy text message asking me if I wanted to ‘make the sex’ with him (probably in a single bed at his mom’s house).

Any sex-appeal for poor niccolo died right there at that very moment, though it wasn’t as bad as the guy who sent me a text using all of the symbols in his 20 euros nokia knockoff to create a virtual ‘titanic’ boat saying that while it was true that there was love between Leo & Kate upon the biggest naval disaster in world history, the true amore was between him and I. I wish I would have saved that text message.. but I can say there was no misuse of the word ‘to make’.

Exhibit C. Take home life for example, When Nico and I have a conversation, we start a sentence in one language and finish in another without even blinking, it actually just feels natural to speak like this. Sometimes something honestly makes more sense in Italian but then laziness has me reverting back to English. It’s actually hard when I am back in America speaking only English, I find myself positively itching to sprinkly a little Italian which makes trips to starbucks a little more fun until I realize my caffe macchiato isn’t actually supposed to look like this.. 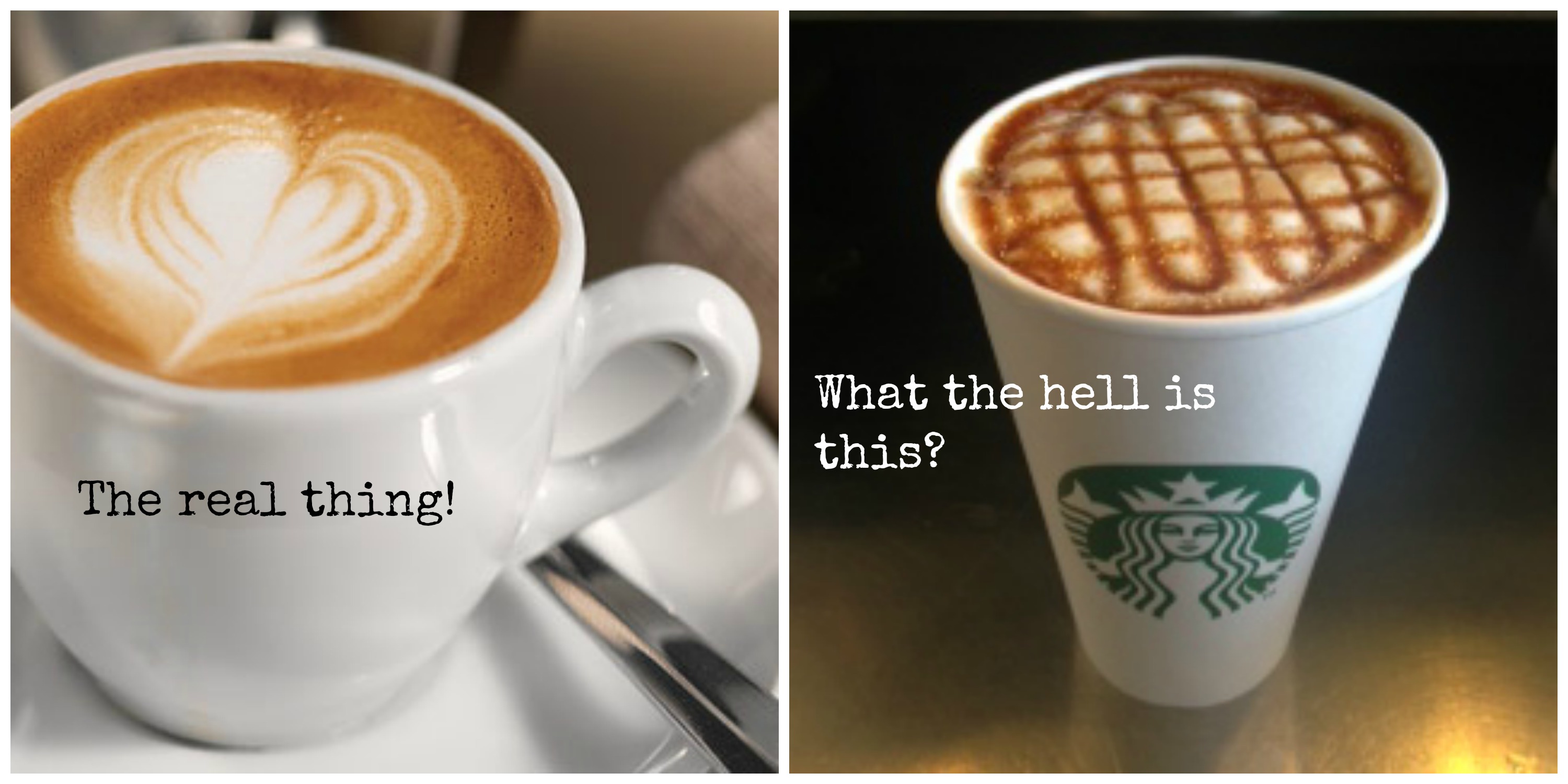 Exhibit D: What is actually a Macchiato? 😉

Language attrition is the loss of a first or second language or a portion of that language. Speakers who routinely speak more than one language may use their languages in ways slightly different from a single language speaker, or a monolingual. The knowledge of one language may interfere with the correct production or understanding of another.

When I started to notice this more and more, I told myself this is ridiculous, while learning three languages is great, I certainly don’t want to lose my English. The problem is that you kind of get used to speaking and writing in your language so that everyone understands, this means using simpler phrases and often leaving out those fun English idioms like ‘its a walk in the park’ or ‘like a bat out of hell’. I used to be so wonderful at speaking, writing, arguing – eating books like candy and debating like a champ, non va bene!

While it’s true I write and work mostly in English, most daily interactions are in Italian and a little French, we even speak to the dog in three languages. My solution was to put the computer down more (or risk speaking in twitter talk, 140 characters max) and picking up more books instead. This ensured that not only was I returning to a hobby that I love, hopefully my English will soon again be better than a second grader in no time at all ;-). If you read this post looking for tips on how to learn Italian, well then I recommend checking out this funny video from the US consulate in Milan that basically says it all? (in jest)
[youtube https://www.youtube.com/watch?v=v2Y-L-dKeEo]

So the end, fine, la fin, despite the provocative title, I really want to hear from you fellow expats. Have you ever felt like your native fluency was slipping a little bit? Share your own awkward ‘I no speak good’ moments with me here 🙂

To see more posts from other crazy stranieri in Italy (We started out own group and yes, we are kinda proud!) check out these posts:

‘Learning Italian in Florence, or that one time a can of Coca-Cola taught me a new language.‘ – The Florence Diaries