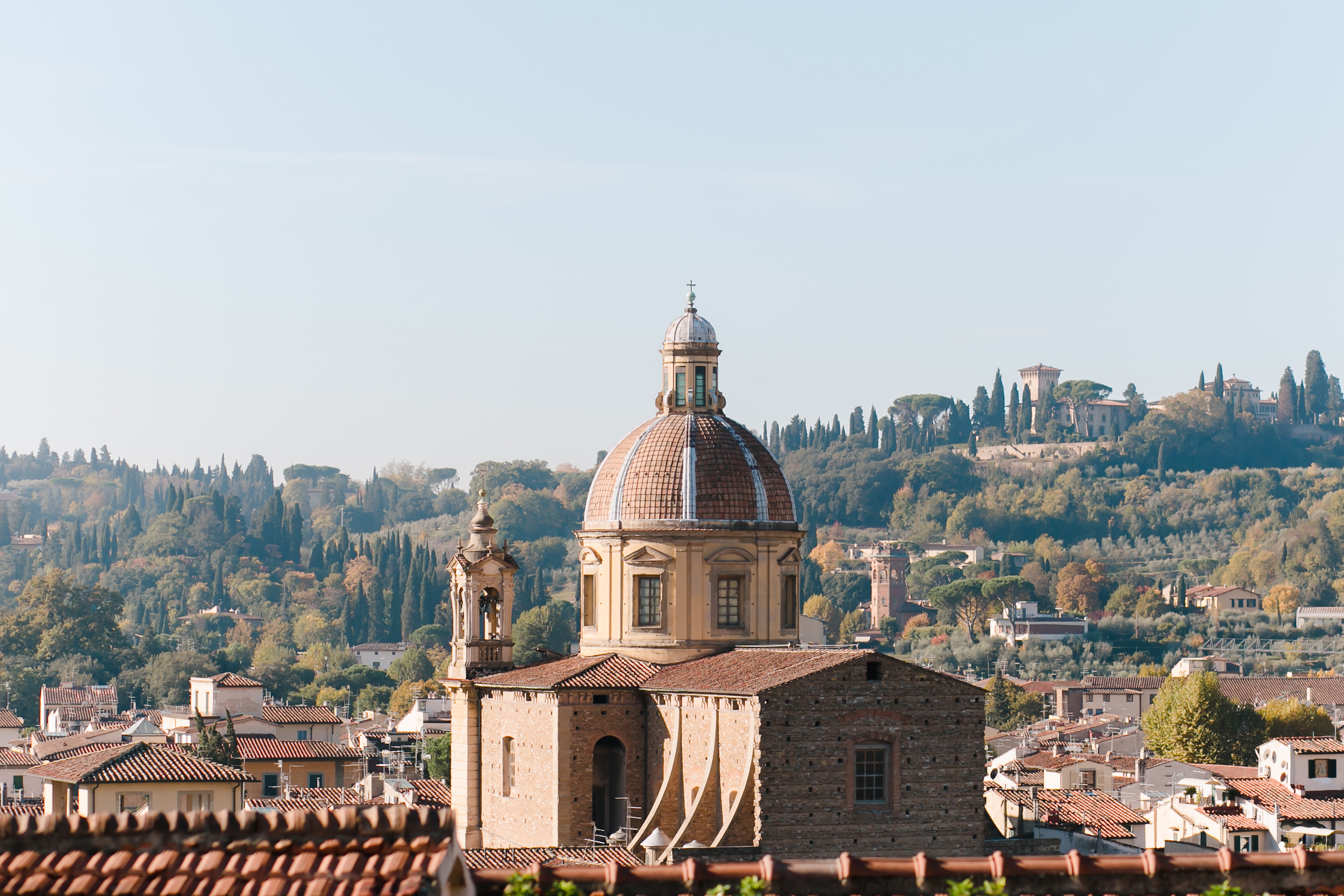 The Church That Faces the Arno: San Frediano in Cestello

It’s a cold, cold crisp morning. The kind where you can see your breath and the kind that makes you wish you owned thicker socks.

I am cursing myself silently for not properly thinking as I rushed to get dressed that morning.

Just a thin jacket, vintage which means the sleeves are too short. A shirt, skirt, and tights that probably will ruin by the day’s end from the excited claws of an overexcited beagle. My scarf is wrapped tightly around my neck for fear of the ever-looming “colpo d’aria” that can result in an uncomfortably stiff neck for days on end, its as Italian as spaghetti al mezzanotte (midnight).

I look over at the people passing by, they look warm in their large black coats with fluffy, fur collars. Everyone seems to have the same coat, probably a gift from their parents, or purchased at the biannual sales. They’re expensive. I know, I’ve looked… but damnit, they look warm.

I’m on my way to an appointment in San Frediano, a neighborhood that you will often see on this blog. A place I adore, cherish, appreciate. As a freelancer, working from home my days are punctuated with hours of furious tapping at the computer finishing up an article or emailing one of our writers at Italy Magazine — or finishing a project for another client. Trying to make sense of the quickly-changing environment of social media online when words mean less than visual eye-candy. I try to make appointments and cafes I like around town because it forces me to put on pants, slap on some lipstick and look like a decent human.

Having a few minutes to spare and not wanting to show up super early as per usual and in Piazza del Cestello, I spot the door to San Frediano in Cestello, a church overlooking the Arno river. Passing by, I thought, why not pop inside for a bit?

You’ve seen the cupola in many “omg the sunsets are amazing in Florence” photos wev’e all succumbed to taking a million times. It is an icon in the Oltrarno, looming over the old palazzi and rooftops like a beacon from afar. People often confuse it for Santo Spirito but it sits quietly formidable, next to Teatro del Cestello (a community theater), a fancy fish restaurant and young chef Simone Cipriani’s Essenziale, next to a parking lot with oh yeah – a lot of cars.

Once through the doors, I find it virtually empty; rows and rows of wooden benches in one of Florence’s greatest examples of architecture of the late Baroque period. Despite its unassuming appearance from the outside, inside it is surprisingly luminous, the pale tones of the walls radiate a beautiful light. It’s a peaceful place, even for a non-religious person like myself.

The name “Cestello” is derived from the Cistercian Order who were here from 162.8. The church was in fact in vicinity to another San Frediano church (under the patronage of the Soderini family – and deconsecrated) which passed along its name when this location was founded upon a former Carmelite convent.

The architectural design is made up of a single nave: the classic Latin cross; with three chapels decorated with frescoes by Alessandro Gherardini, Matteo Bonechi and Antonio Puglieschi. Look up into the circular dome and you’ll see frescoes frescoes depicting scenes of the Glory of Saint Magdalena (by Anton Domenico Gabbiani) and the Virtues (by Matteo Bonechi). From the chapels on the side you’ll spot a “Smiling Madonna” statue, made out of wood, from the 13th-14th Century. Also notable is the fresco Crucifixion and Saints by Jacopo del Sellaio (1442) and an alter-piece by Francesco Curradi depicting the Glorified Madonna and Saints.

The construction you see today dates back to 1680 and was completed in 1689, first worked on by architect Gherardo Salvini, then by Antonio Cerruti, a “new” project. The cupola was especially impressive, while not the same by Brunelleschi standards, it was and is an icon in the Oltrarno and can be credited to Antonio Maria Ferri.

*Fun fact: apparently, the original façade was meant to face San Frediano, instead the monks opted for an entrance on the side of the river. It is the only church in Florence to face the Arno.

The façade was never finished, this only leads to its mysteriousness and dare I say intriguing subtlety, a bit like San Frediano itself. Never in your face — but confidently there, as it has always been throughout centuries.

The church’s location is on a former monastery (Santa Maria degli Angeli) that dates back to the 1400’s, owned by Cistercense monks, it later was switched with a monastery owned by monks on Borgo Pinti. It remains a church of the people, as many have been coming for generations in the neighborhood and it also happens to be “home” to a rather famous figure in history.

This was the place of Santa Maria Maddalena dei Pazzi, a nun born in 1566 turned saint (and mystic) who came from one of the richest families in the city during the time of the Renaissance “de Pazzi”.

Clearly something more “spiritual” was in the cards for her as she was taught by the family chaplain at age nine how to meditate and took a special interest in the daily prayer. It is said that she experienced her first ecstasy at age 12 (in the religious sense it is best described as an altered state of consciousness to connect with divinity – in fact, I have just the book recommendation to help explain it) and refused to marry when into a saintlier life where she could be her all.

She chose Santa Maria degli Angeli (now San Frediano in Cestello) largely because there followed the rule of daily communion, something she held a particular obsession in.

I suppose you could consider her lucky in that time when few women were awarded independence or power.

She was well-known for ecstasies, during which she sometimes predicted the future. In 1583, when thought to be on her deathbed, she experienced a daily extraordinary ecstasy that happened daily for 40 consecutive days, upon which she recovered completely.

She passed away at age 41 after a long illness and was buried in the church chapel, but was later moved to another church in Careggi when the order changed locations to what is now the Santa Maria Maddalena dei Pazzi church, a Renaissance-style Roman Catholic church and a former convent located in Borgo Pinti.

Nowadays, San Frediano in Cestello has been converted into an Archiepiscopal Seminary, often quiet, known to those in the neighborhood and not many others. Most people who visit Florence head to more popular churches at Santa Croce, Santa Maria Novella, or naturally, the Duomo. Is this place worth visiting? I think so, after all, you never know what you might find.. 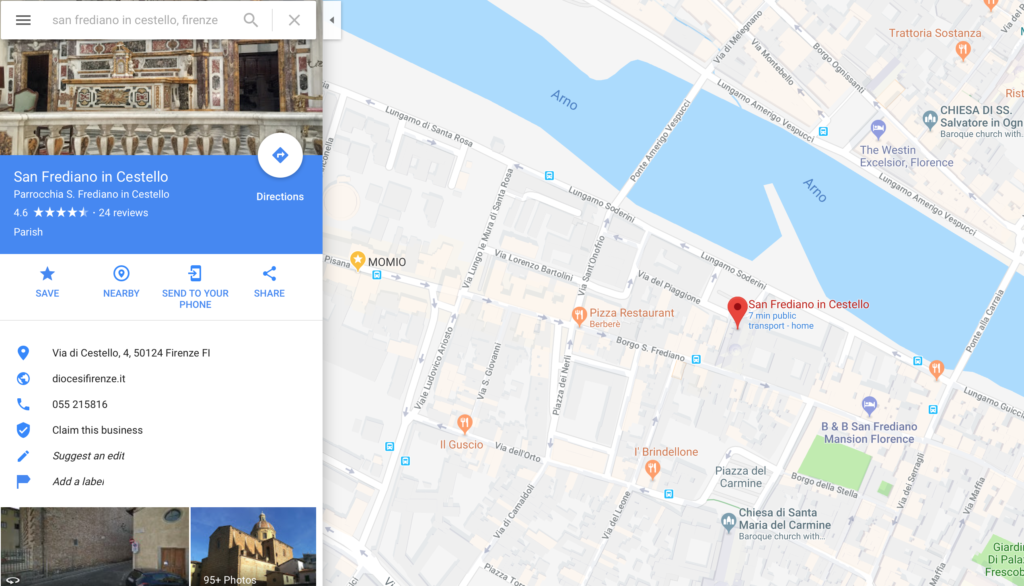