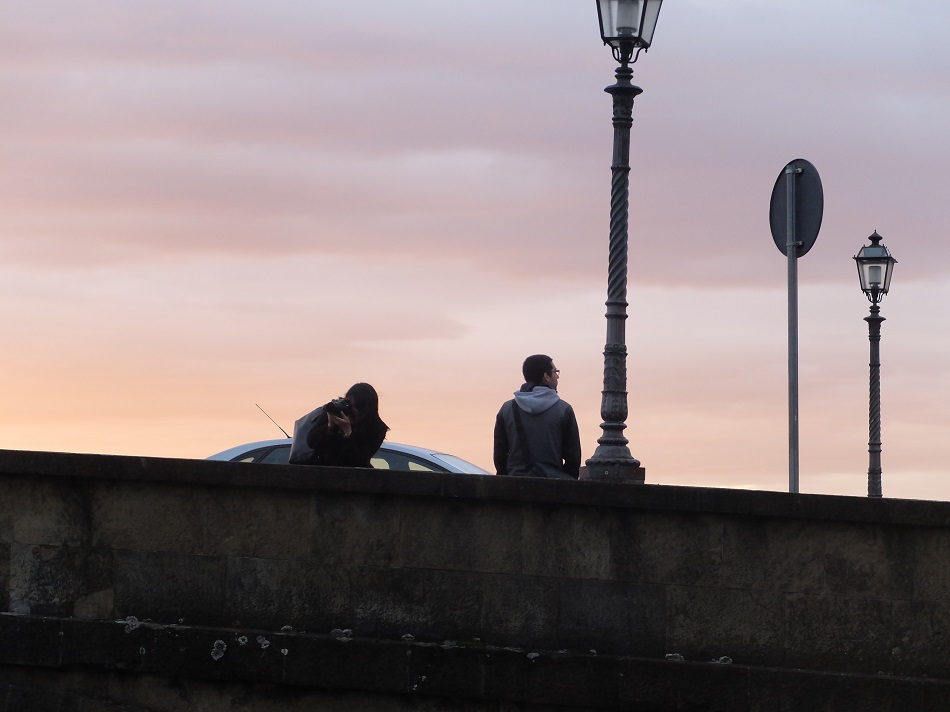 When Your Love Story is Best Answered ‘It’s Complicated’

Sometimes when people ask me about my love story, I’m tempted to lie. To say yes, I came here and fell in love and that’s it. The fairy-tale everyone wants to hear.

You know what I’m talking about. Girl visits Italy, is enamored by the history/beauty meets local boy, falls in love over gelato outings and shy kisses on Piazzale Michelangelo before starting on a new life together in the country of amore. Sunday dinners with the family, bonding over bruschetta and freshly made pasta as the in-laws poke for the seventh time when you might be thinking to make it ‘official’ since they are dying for a bambino.

Well the truth is, sometimes it’s much more complicated than that.

Heartbreak has no borders, and just because it may move at a slower pace in Italy, sometimes so excruciating slow you don’t even know it’s happening – it doesn’t mean it hurts any less.

I actually didn’t plan on writing this post. Our #COSItaly blogger round-table subject for this week is quite naturally all about ‘love, sex, marriage – whatever you want’ in honor of Valentine’s Day. I decided that I wanted to write about my brief experiencing dating in Italy. Humorous stories about guys who gave me gently-used teddy bears and drank tea instead of coffee. Sent texts at inappropriate hours of the night in broken English about what they might want to do with me, I always wanted to reply ‘where, in your single bed?’

Or the time a guy thought it would be fun to take me to the serial killer museum on via cavour on a first date, I learned about the most horrible of human acts while he smiled and asked me to pose for pictures. He later sealed his fate when he sent me a text message using every symbol in his phone (I kid you not) to create a digital ‘Titanic’ ship with the phrase ‘They say the greatest love was on the titanic, but I think it is between you and I’. Charming.

Or the time my best friend and I escaped a double dinner date in the middle of our second course when it was clear the mood was changing in a slightly scary way. That happened too.

I probably don’t need to tell you this but dating is awkward in any country. The misery of not knowing what that other person is thinking, analyzing every text message and ’emotican’ is universal.

It can be even more so when you have a language and culture barrier, and thus really cannot gage what is ‘normal’, decisions mainly are made based on your gut. Also dating I have found is very ‘American’, the act of going out on a series of dates, and if you are from a big city, this usually means with multiple people until you decide which person works best for you, and vice versa sometimes they decide and you don’t always like the answer. It’s all about experience, and not settling down so quickly, just being young.

When I first mentioned this to Italian friends here, I wasn’t surprised that I was met with ‘but, you kiss more than one person at a time?’. Well I wouldn’t go that far, but I suppose it is a little different from just hooking up with someone in your friend group for 10+ years from the age of 18. By 30 you start to see these relationships crack, breakups usually happen together so I’ve noticed lately. This isn’t everyone, I know that people start ‘younger’ now but this is just my personal experience.

Valentine’s day has always been a complicated day for me, just a few year’s ago I spent this synthetically grown holiday a hot mess. You know the ‘ugly crying’ you wish you never have to go through again and hope to god that no-one ever sees. The feeling that person that you loved the most isn’t the one for you, and that it has to be you to change things. You tried to make it work, put your heart and soul in it and you know you probably did it for a little too long.

The fact that you realize this on a day that is supposed to be about love, is a sad, sick irony that almost feels right, like it was supposed to happen like this. It took me until my late twenties to realize that you can’t make someone love you the way you need to be loved. Maybe they need to love themselves first. It seems straightforward, as obvious as a simple pasta con pomodoro, but it really isn’t, at least it wasn’t for me.

Maybe its human nature to keep trying, to make it work, especially when so much of your life is intertwined. Your first thoughts about what could happen if things don’t work out are so superficial, the fear of finding a new place to live, dealing with friends you have in common, going to the questura di firenze for your permesso renewal by yourself. Losing a sense of comfortable safety that you’ve had for so long. Can you make it on your own?

To be fair to the other person, it isn’t solely one person’s fault. You had great times, memorable times, and there was an integral reason that they even fluttered into your life in the first place. Instead it is more about the fundamental makeup of a happy relationship that just isn’t there anymore. A consist and necessary level of compassion, respect and more importantly, a common way of viewing the world. There is only so much you can excuse because you don’t come from the same country.

Sometimes you just have to say, basta.

As hard as it is to write about these things, so personal and extremely real. It’s a little easier from the safe distance of being in love. While my love story isn’t as simple as ‘boy meets girl’ and happily ever after, instead it’s a bit more like ‘girl finally wakes the f*** up and realizes the greatest thing has been there all along.’ In my case he came in the form of a best friend, the person you go to for advice, the one who is actually fun to go out with, his absence from any event always met with a sigh of disappointment.

The guy so humble that you never knew even after years of friendship that he played the piano like a baby genius and studied all over the world before coming to Italy. I would have told everyone that, (kidding). Every factoid over the six years was slow in the coming, probably because you spent most of the time talking about your problems. He’s the person who embraces your quirky, probably pretty annoying habits, like taking 10,000 photos of a cappuccino and leaving your closet a mess.

The person that makes you want to be a better person in life. Who knew it could ever feel this easy? I used to really believe that relationships are supposed to be complicated. That was just part of life, right? That we humans must bond over yeah ‘my boyfriend does that too’ and that fighting over silly issues over and over again was the norm.

Don’t get me wrong, no one’s perfect, but so much stress over stupid things is gone — and what is left is a feeling that is nothing short of being free. He taught me what a ‘real man’ actually is, not the guy screaming the most at football matches and quick to criticize anything or anyone he doesn’t understand, but instead coming through when it matters. That’s what actually makes a man.

So when I struggle to answer the question ‘So how did you come to Italy and meet your boyfriend’, I just smile and say we both fell in love with Italy first… and then.. well you know the rest.

Look for our hashtag #COSItaly and feel free to write a blog post and share with us by using this hashtag. We would love to see your take on this popular topic.

Misty of Surviving in Italy

Maria of Married To Italy – The search for sex in Italy: 6 Italian slang sayings

Rochelle of The Unwilling Expat – Searching For San Valentino

Pete of Englishman in Italy

Andrea of Sex, Lies and Nutella – Be My Italian Valentine: “Viva l’amore – abbasso i sedili