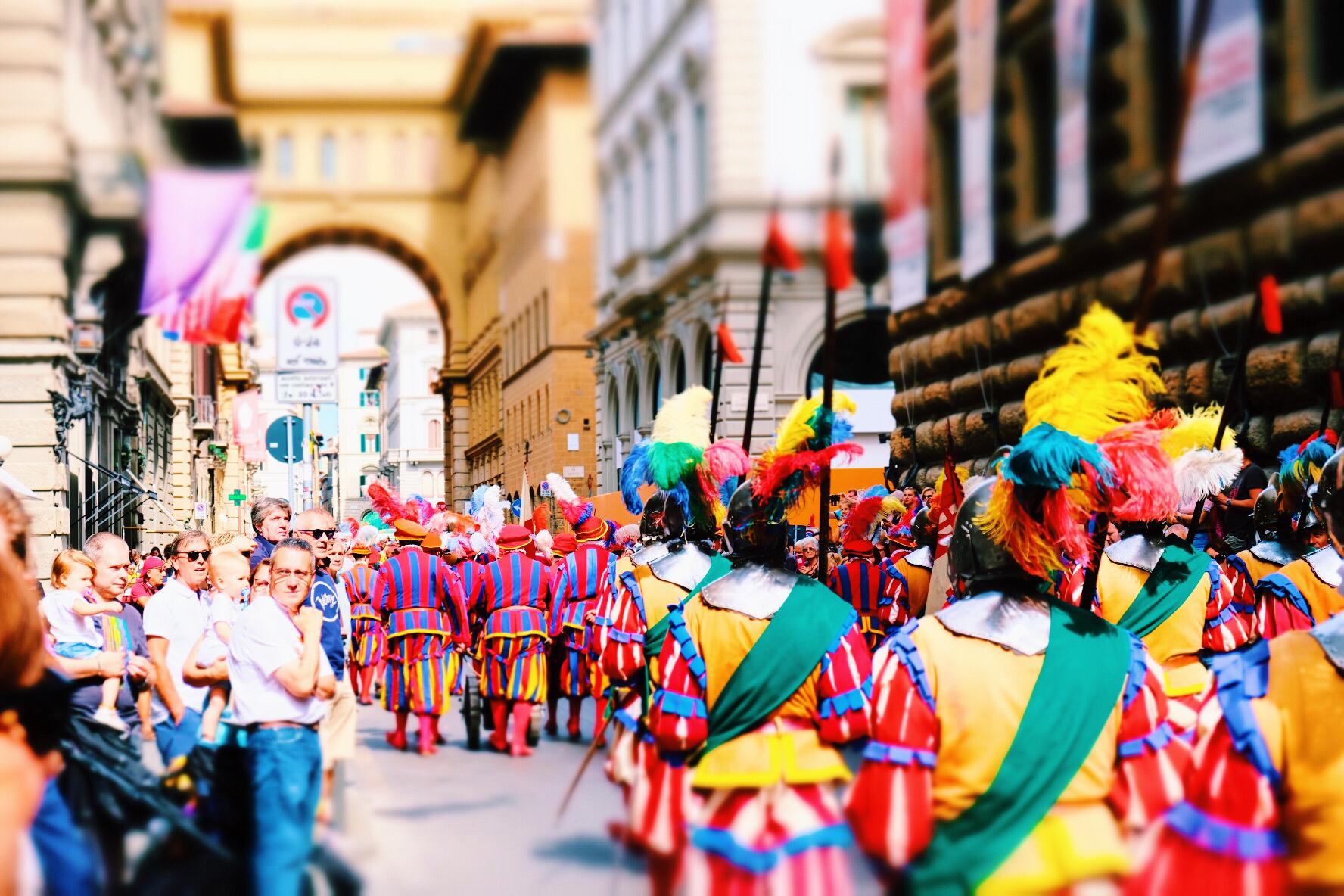 There’s always been a bit of a magical air surrounding the month of June in Florence. May can be drastic in its weather variations, cold one moment, raining o uncomfortably warm. June however marks the welcome arrival of summer on the 21st, summer solstice combined with long days as a convivial spirit prevails before the exodus of people come mid-July through the beginning of September.

June is the birthday month of the city’s patron saint of San Giovanni Battista (St. John the Baptist), a figure and symbol of “moral rectitude and political correctness” also depicted on the florin coin, the ancient currency of the city. It’s wirth noting that St. John the Baptist is also the patron saint to the city of Turin and Ragusa. You will see him depicted in various forms around town. One such example is in an external niche of the church of Orsanmichele, his bronze statue dates back to the 15th century by Lorenzo Ghiberti. You will also see him numerous times in the Uffizi Gallery, most notably the works by artist Raffaello and Lucas Cranach the Elder and for a more modern and contemporary version in Piazza di Santa Maria Sopr’Arno: San Giovanni by Giuliano Vangi. The local baptistery (home to incredibly gold mosaics)was later dedicated to St. John and was consecrated in 1059.

You can read more about him in this lovely write-up by Deirdre Pirro for The Florentine which offers fascinating insight to his connection to Florence.

June 24th is the accumulation of many ancient rites and historical processions to celebrate the patron saint, of which began around the 13thcentury — though St. John was the chosen saint after Florentines converted to Christianity with arrival of the dominant Longobards. Before the city’s symbolic protector was Mars, the god of war, his likeness washed away in the flood of 1333. What appealed about San Giovanni was naturally his powerful fortitude and concise teachings with sayings that resonated with the local populace at the time “Exact no more than that which is appointed you” or ““Behold the Lamb of God who takes away the sin of the world!”

As tradition would have it, Florence today plays host a myriad of events and celebrations to continue marking the occasion.

It starts, naturally, on a religious note. A special mass this morning with an annual offering of candles to the archbishop of Florence in the Duomo’s baptistery a tradition, followed by mass in the Duomo cathedral or Piazza del Limbo (Santi Apostoli).

There is also the final match of calcio storico, Florence’s 500 year old historical football match that is almost insane to watch from an outsider point of view for its rather violent undertaking. Four different districts of the city pitted together with teams wearing historical dress and modern muscles, the action takes place on a large sandy football pitch directly in front of one of the city’s most important churches. Two teams of 27 players take part in the match that lasts roughly 50 minutes. The teams represented are Santa Croce (blue), Santa Maria Novella (red), Santo Spirito (white), and San Giovanni (green). What I personally enjoy about the festivities is just how insane people get over their loyalty to the game, and most importantly to the neighborhood they support. I live in the Oltrarno (other side of the river) that supports the Bianchi, clearly evident from the amount of white streamers and strung-up flags around both the square and tiny streets that snake their way from San Frediano to Piazza Santo Spirito.

The final match takes place today at 5pm, pitting the Rossi against the Verdi. Earlier this year expert guide and “girl with the best hair in Florence” Alexandra Lawrence and I took a walk around Piazza Santa Croce on Facebook Live – you can watch the fun below.

Join expert guide Alexandra Lawrence – Explore Florence and I LIVE in Piazza Santa Croce as we talk about its rich and varied history and the importance of the Santa Croce Basilica, the largest Franciscan churches in the world.A special thanks to Dolce Vida Photography for filming!

I love to watch the procession Corteo Storico della Repubblica Fiorentina that leads from the Palagio di Parte Guelfa to Piazza Santa Maria Novella and later towards Santa Croce (starts around 3pm), a lot of fun to watch as a parade of figures in historical dress along with the cow and players of the calcio storicomake their way to the match. 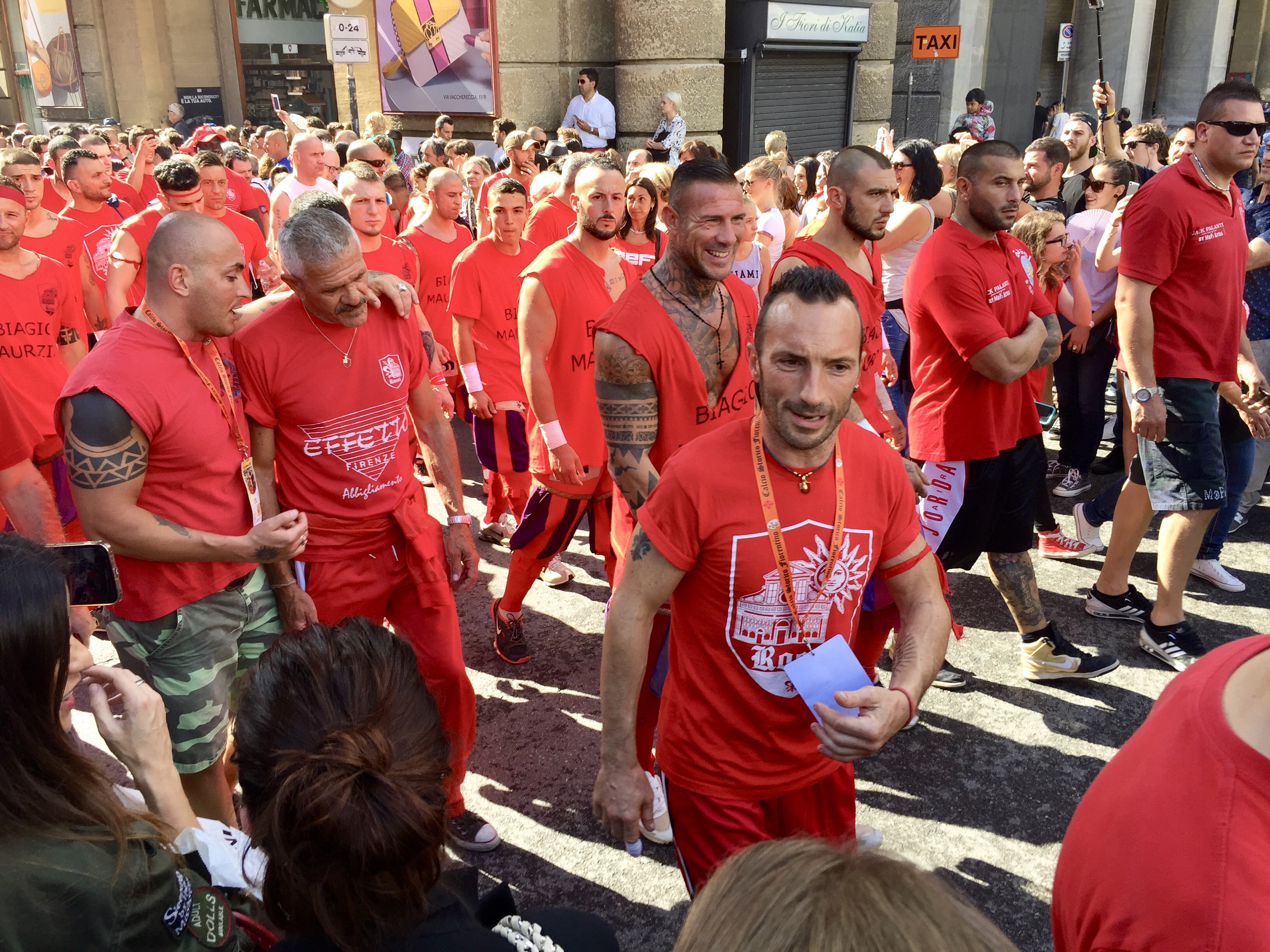 This year you can head to the lungarno della Zecca Vecchio for a special orchestral concert around 20:30 from the Fiesole school of music.

After, this evening, is the annual fireworks show that end June 24thwith a bang. “I fohi di San Giovanni”brings locals and visitors alike to the banks and bridges of the Arno River (Ponte Santa Trinita and Ponte alle Grazie tend to get the most crowded but the “Arno Beach” below Piazza Poggi is a popular spot too) to see a spectacular display of pyrotechnics that kicks off around 10pm that evening frim Piazzale Michelangelo.

Today marks the opening of the Torre di San Niccolo, or San Niccolo’s tower, to the public, one of the city’s best preserved ancient gates. From now until September 30th(excluding Mondays), you can climb the tower via guided tour (both in English and Italian) daily from 5-8pm (from September, 4pm) for the affordable cost of 4€.

A video I made from last weekend climbing one of Florence's best panoramic spots, Torre Di San Niccolò. Quite literally, a piece of ancient history. I definitely recommend doing this when it isn't 103 fahrenheit outside, guided tours available from 5-8pm until September 19th. For more Florence tips, have a look at this list https://girlinflorence.com/things-to-do-inaround-florence/. Music by: Jason Shaw http://audionautix.com.

Posted by Girl in Florence on Thursday, August 3, 2017

I highly recommend that you do as it is a spectacular experience, from its own fascinating history that you learn during the tour to the stunning panoramic view you can enjoy above. It rarely gets crowded and remains a personal favorite when it comes to summertime activities in the city.

If you happen to be in Florence, have fun today and keep an eye out for the procession later this afternoon. Buon Festa di San Giovanni a tutti!

Annabelle’s first #friendsgiving was a Turk-tast

Today is a national holiday in Italy but did you k