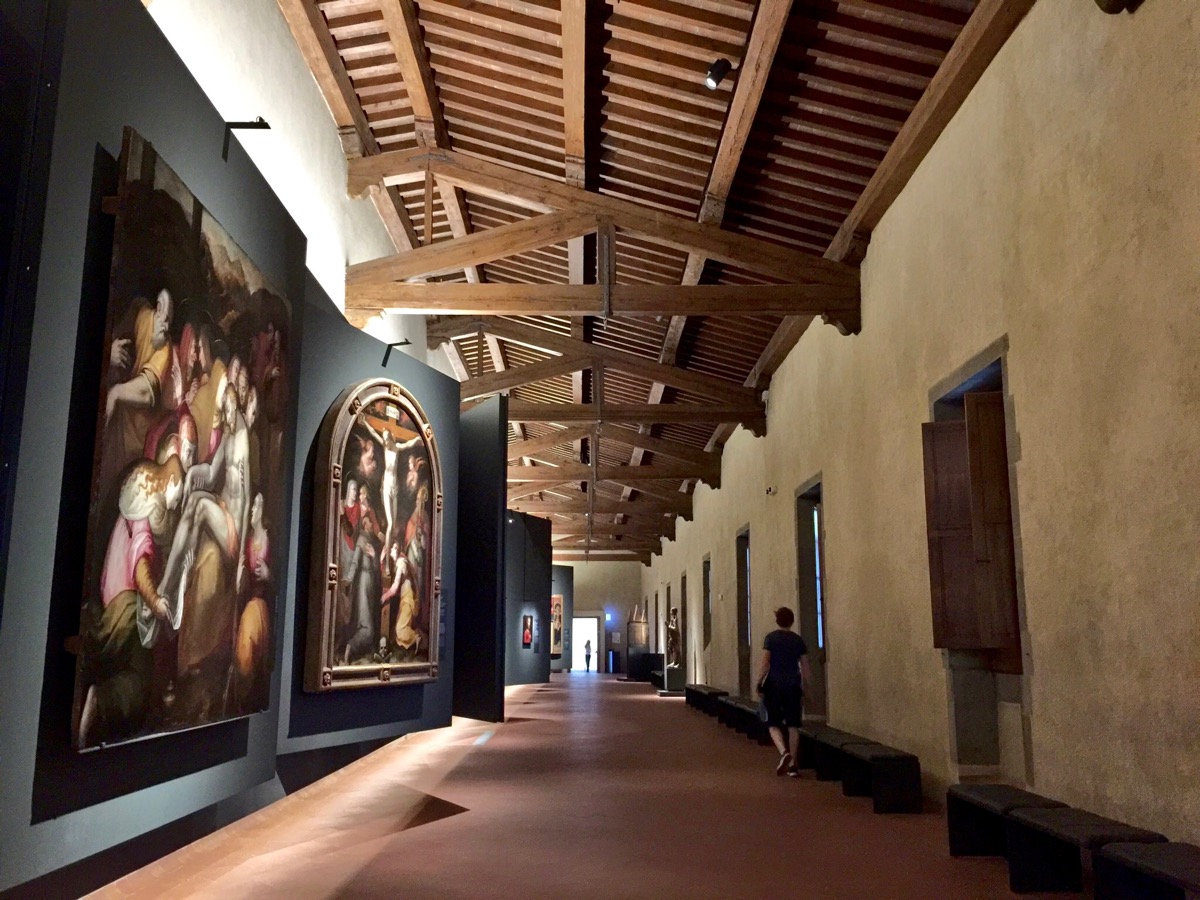 A Charitable Past in Florence: Museo degli Innocenti

Six generations of interrupted charitable work in Italy’s most popular Renaissance city, bear witness to another side of Florence by visiting the Museo degli Innocenti or Istituto degli Innocenti.

The first orphanage in the world.

While the official inauguration of the most recent 12.8 million euro renovations funded by the Tuscan region and the institution over a period of three years happened this past June, I only got around to visiting more recently. And what a tremendous joy it was. In a space that covers around 15,000 square feet, you can explore a number of important works to be explored by famous names such as the ‘Adoration of the Magi’ (1488) by Ghirlandaio, Della Robbia, Botticelli and the ‘Madonna and child’ (1493 ) by Piero di Cosimo, among others.

What (to me) was most impressive to see were the glazed terracotta “putti” in swaddling clothes, completed by Andrea Della Robbia in the 15th century. Andrea’s “babies” have become the symbol of the institution. You can see them up close and personal in a special “nursery” inside the museum before they return to their rightful place on the outside facade later this year.

Its as nice to be in a museum that wasn’t crowded to the hilt with tourists snapping iPhone shots and butt-bumping me to get to La Primavera. Instead this balmy Saturday, we were probably one in five reading about this not-so-well known history of the city. It’s charitable underbelly offering a home to “foundlings” —  the first of its kind at the time.

During this period in history (the 15th century roughly) it was guilds that were most responsible for philanthropic duties. In this specific place the silk guild, one of the seven major merchant guilds, is credited to have managed the building the institution after the initial first generous donation for the creation of the place in the will of a Prato merchant, Francesco Datini, in 1419. The aim was to provide help to families and gave abandoned children a safe home. Previously places in a basin until the 1600’s and a gated window that you can see on the outside of the building, newborns who could not be cared for by their parents were received eventually via a special rotating horizontal wheel that allowed the parents to remain completely anonymous. This carried on until 1875, when they closed off the possibility of leaving children here in this manner. Ps. I should note that they aren’t the only institution in Florence with a long history of charity.

The first child to have been left here on February 5th, 1445 was named Agata Smeralda, and nearly a hundred years later, there were more than 2,000 children who called this place home. Poignantly enough the last child to be accepted into the institution was named “Ultimo.” Typically the babies were those of servants to the wealthy or slave girls. In fact, you might see the surnames of “Innocenti or Nocentini” in the local white pages, descendants of children who grew up in the Piazza Santissima Annunziata orphanage.

The square of Santissima Annunciate has always been a personal favorite as well, home to a fair share of local legends (just ask about why one window is always propoed open in the square), one of the gaudiest Basilicas in town, and offers pretty superb view of our lady of Santa Fiore on a nice day. If you’re looking for a nice hotel here, look no further than the 16th century gem called Loggiato dei Serviti, a historical three-star residence that comes with a fair amount of charm.

When it comes to the museum itself, it was hard for me to get a decent shot of the exterior due to ongoing construction which is set to finish this November (seriously this city is always under some sort of scaffolding). However, the original structual design is attributed to the late, great Filippo Brunelleschi, who in the Renaissance style, utilized a blend of Italian romanesque, classical Roman and late gothic architecture and its harmonizing qualities. You know, that cool dude who might have been responsible for a certain cupola we all like to brag about so much. The loggia or “portico” in front of the museum overlooks the square and was used to provide shelter.  Each column was topped with one of Andrea della Robbia’s terra-cotta babies. The space also is home to UNICEF’s Global Office of Research since 1988, they have collaborated on a library documenting the lives and histories of the children. In fact I got lost in the museum at one point and almost found myself in their offices ;-). 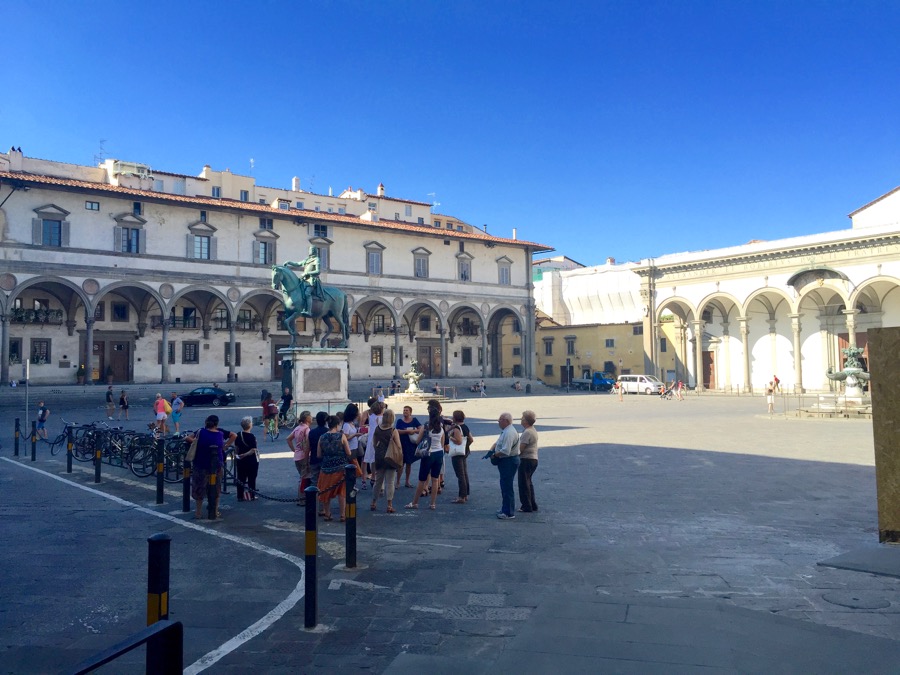 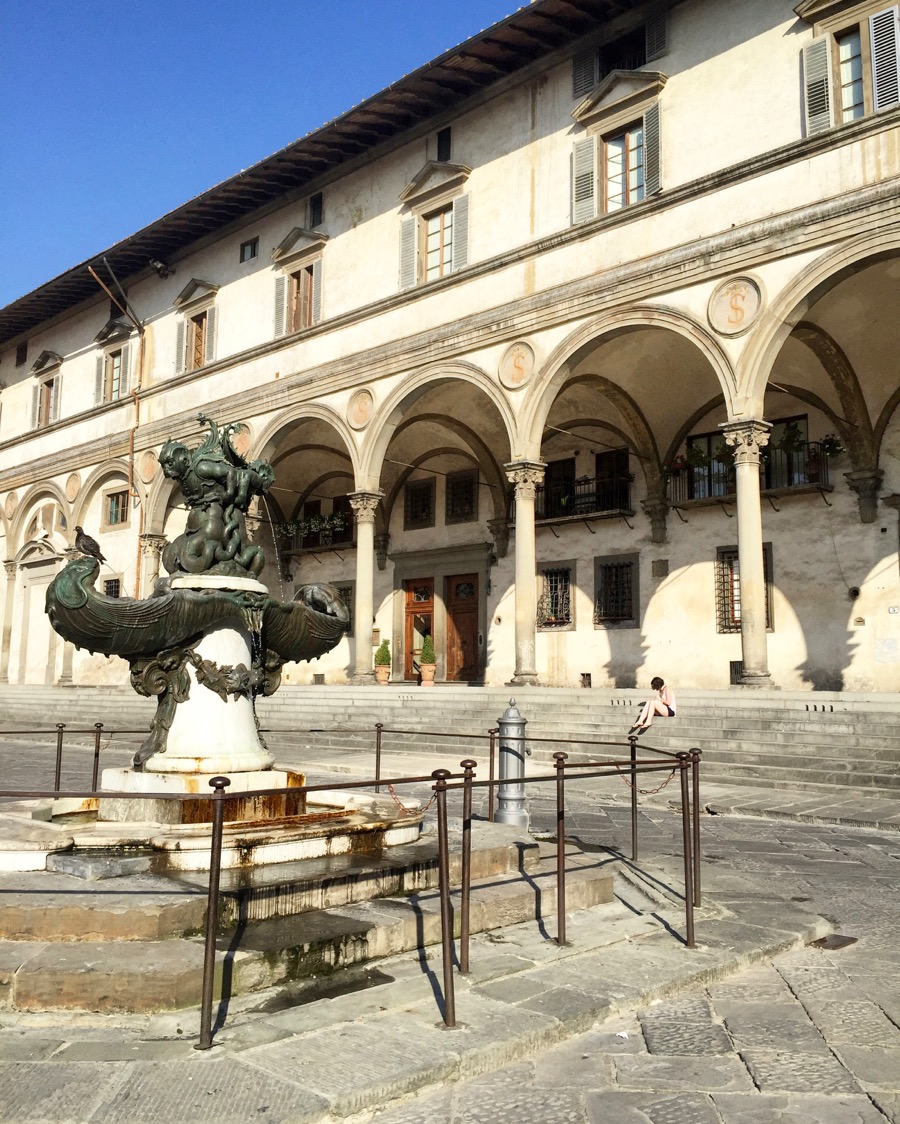 The Museum’s Layout, The best Thing Come in “Threes”

Once inside and you’ve navigated the somewhat confusing ticket price ( which largely depends on whether you go for the guided tour or night); the basement floor where you start your visit is dedicated to the history of the museum. The next two itineraries are as follows: the first floor showcases the architectural treasures with the first floor focusing on art. There is a tremendous 18th century staircase from which you can see a mid-14th century St. John the Baptist statue by Simone Talenti commissioned by the silk guild, that was once in the tabernacles in Orsanmichele, yet another underrated Florentine museum.

While it seemed a little bare on first sight (my own opinion), I truly appreciate the fact that everything was translated into English as well as Italian which should be obvious but it often isn’t. Plus there were plenty of visual and media additions which make the experience a bit more fun, including an interesting video that I recommend watching before starting your tour. Considering that this was an institution dedicated to children, they tried to make it as child-friendly as possible with activities offered by the museum (you’ll have to tell me how they are). Also worth pointing out is that the museum is entirely wheelchair accessible.

What I really appreciated about this museum is that it not only gives you the chance to learn about architecture and art of the place (we get so much of that already in Florence) but it also offers a really interesting insight into the world of  orphanage life and childcare in past centuries. My mind was often left wandering by the individuals who called this place “home,” did they have equal chances at life? Was there a deep sense of loss? Or were they the fortunate ones because such a place even existed?

My favorite area of all were the tiny drawers (around 140 in total) which you can pull out to peer at the “marks of recognition” inside. They contain the items, and offer a piece of the life stories of the kids housed here. It could have been a half-pendent, a broken coin, a key, left by one’s mother or father who carried the other half. It could have been a way to identify a child if the family later came to collect them.

In any case you could absolutely spend plenty of time examining each forlorn item, a peek into one person’s history (they also have an interactive media display showcasing some of the children’s stories from the 19th century). I spent probably 25 minutes just reading each short story.  The “innocenti” children or “innocents” here were sent to wet nurses and raised in the orphanage, to later enter into apprenticeships, domestic service or provided with dowries for marriage. 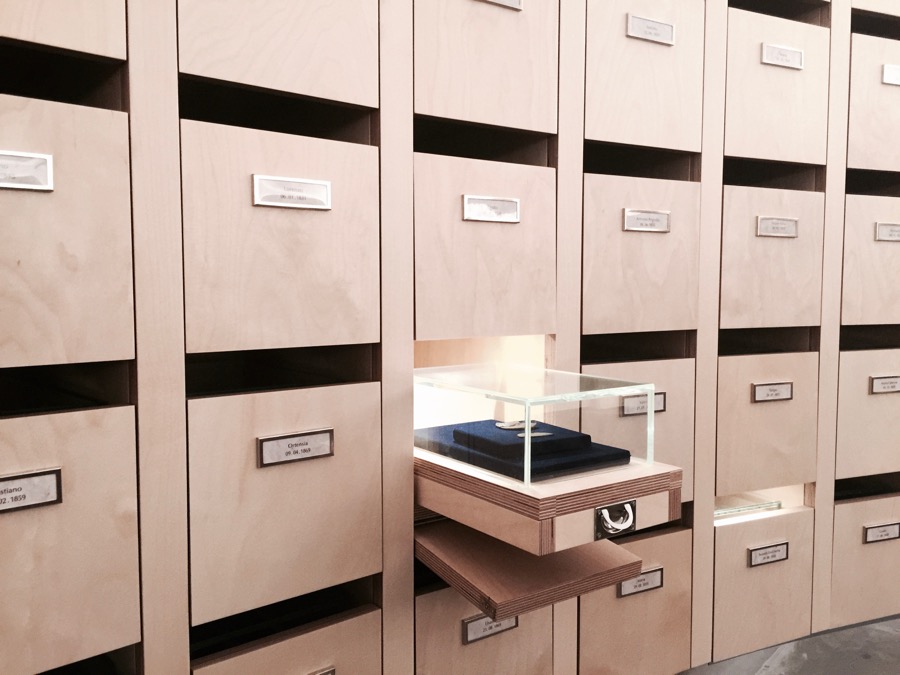 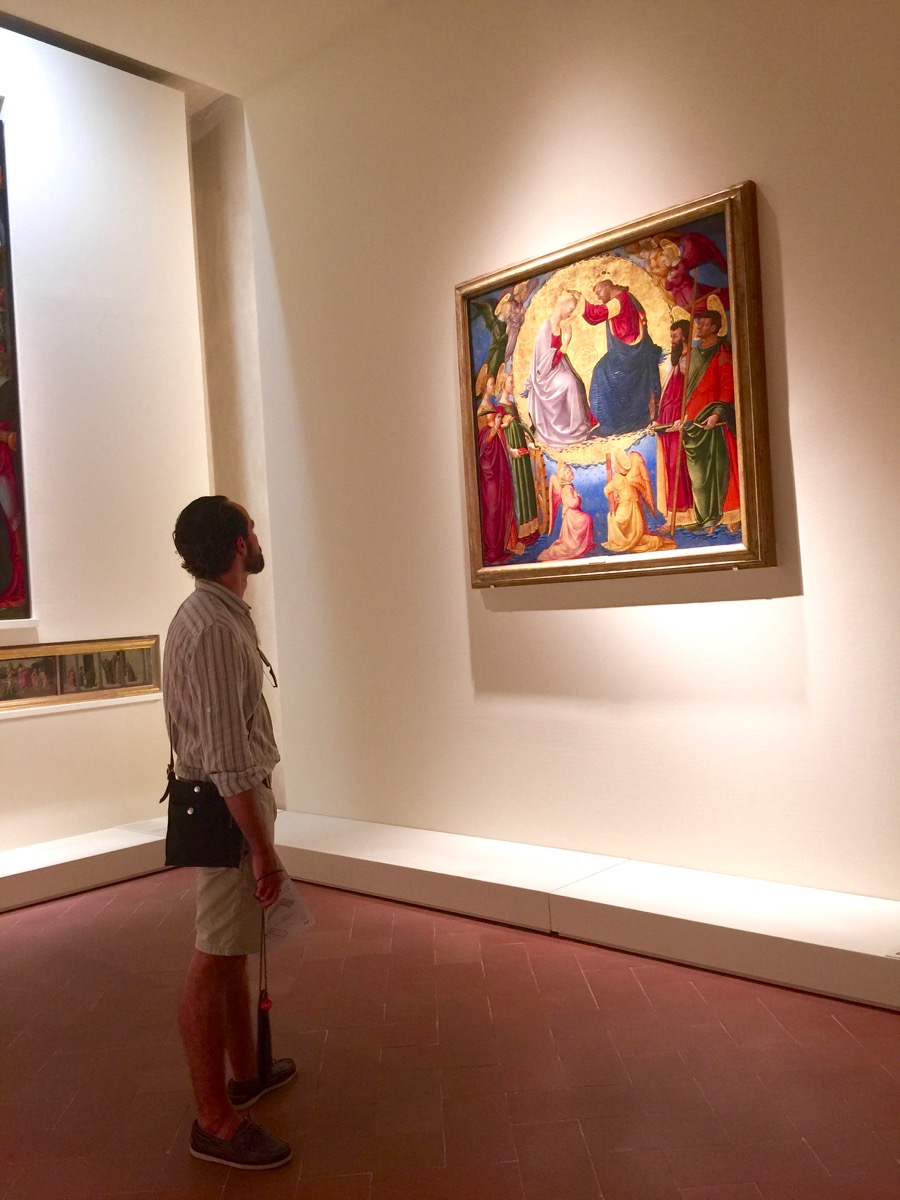 In the year 1899, Gustavo Pucci hired a photographer named Brogi for a photographic campaign for the 1900 Universal Exposition in Paris with the theme of Social Economics Public Health Care.” They showcased the modernity and cleanliness of the institution which you can see via the photos below.

Another reason to visit this museum is the panoramic cafe which offers a unique skyscape over the city, the synagogue’s green cupola stands front and center and you can get a bird’s-eye view of the Duomo cathedral. When the hospital was still in use, this area was an open-air gem where laundry was dried and offered the opportunity for the staff and children to get a bit of outside air without actually having to leave the building.

Even non visitors to the museum can visit the cafe, open from 10-7pm daily, just to give you a heads up its is on the pricey side. I think I paid 5€ for a caffe shakerato (cold shaken coffee) but it’s absolutely worth coming for a before-dinner or afternoon drink with this very unique and uncrowded view. 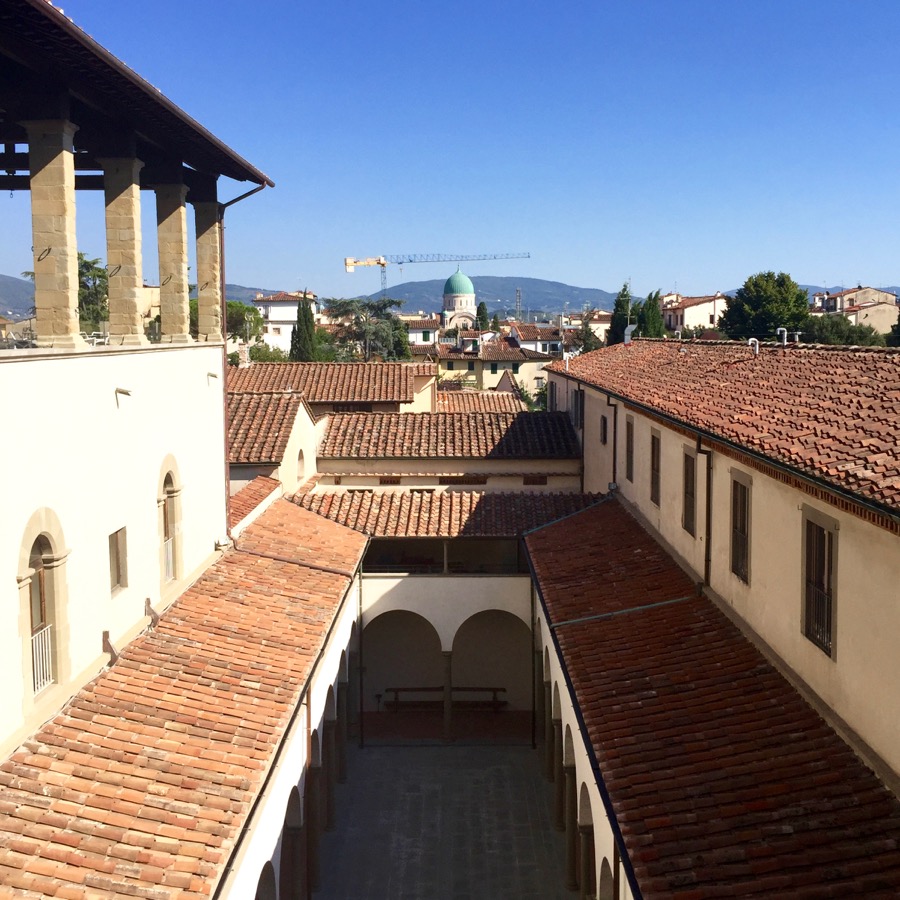 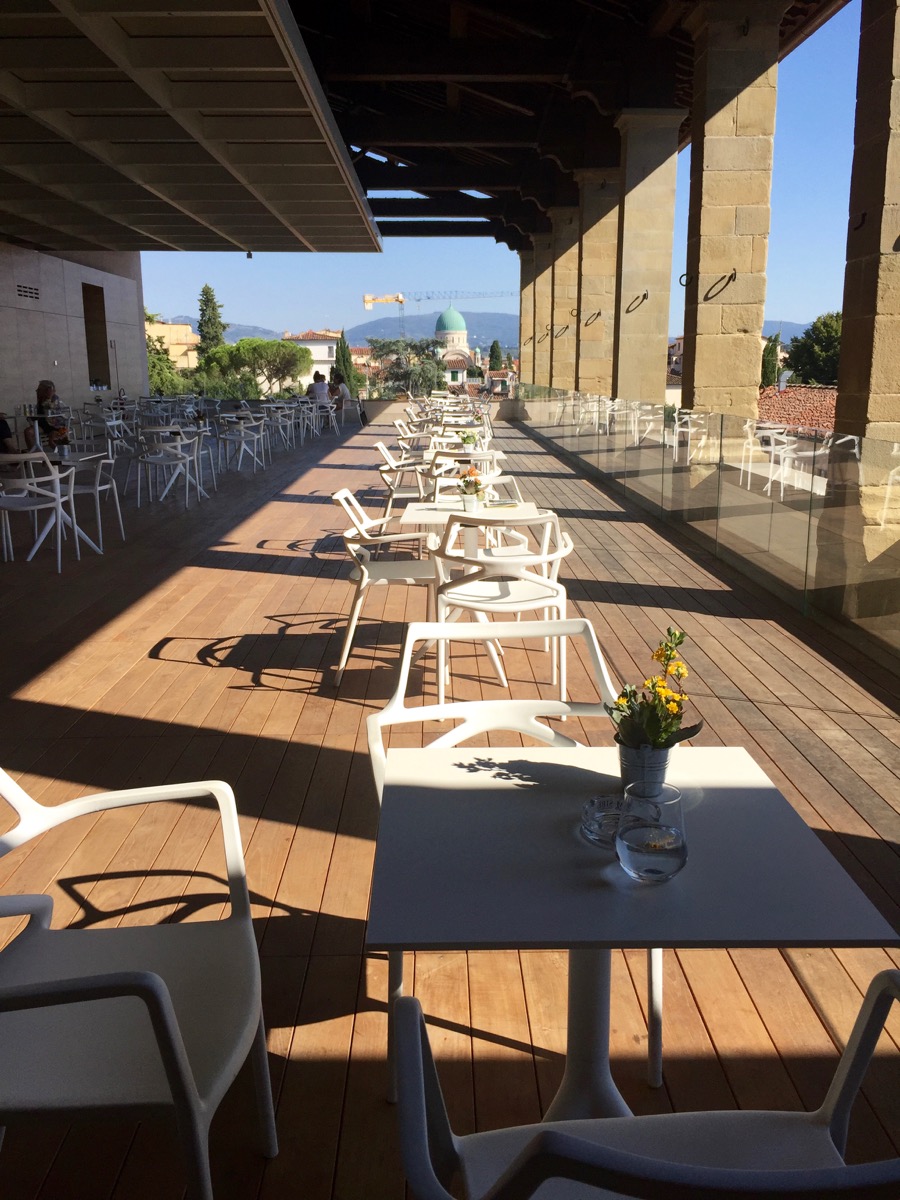 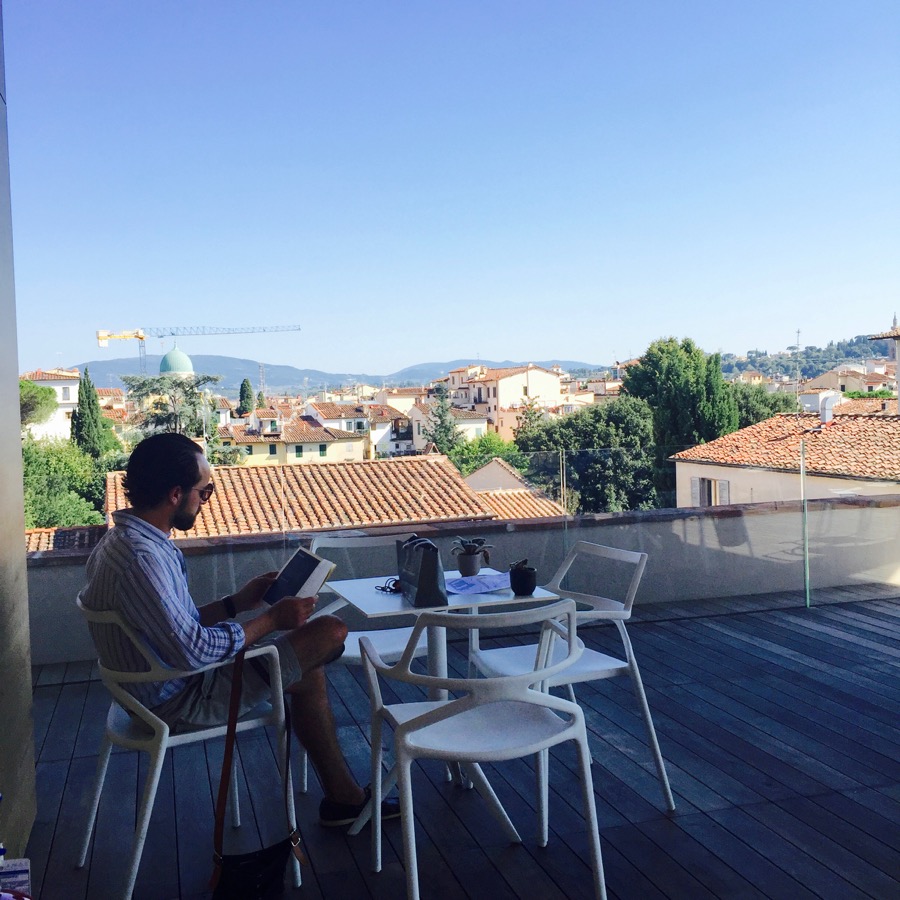 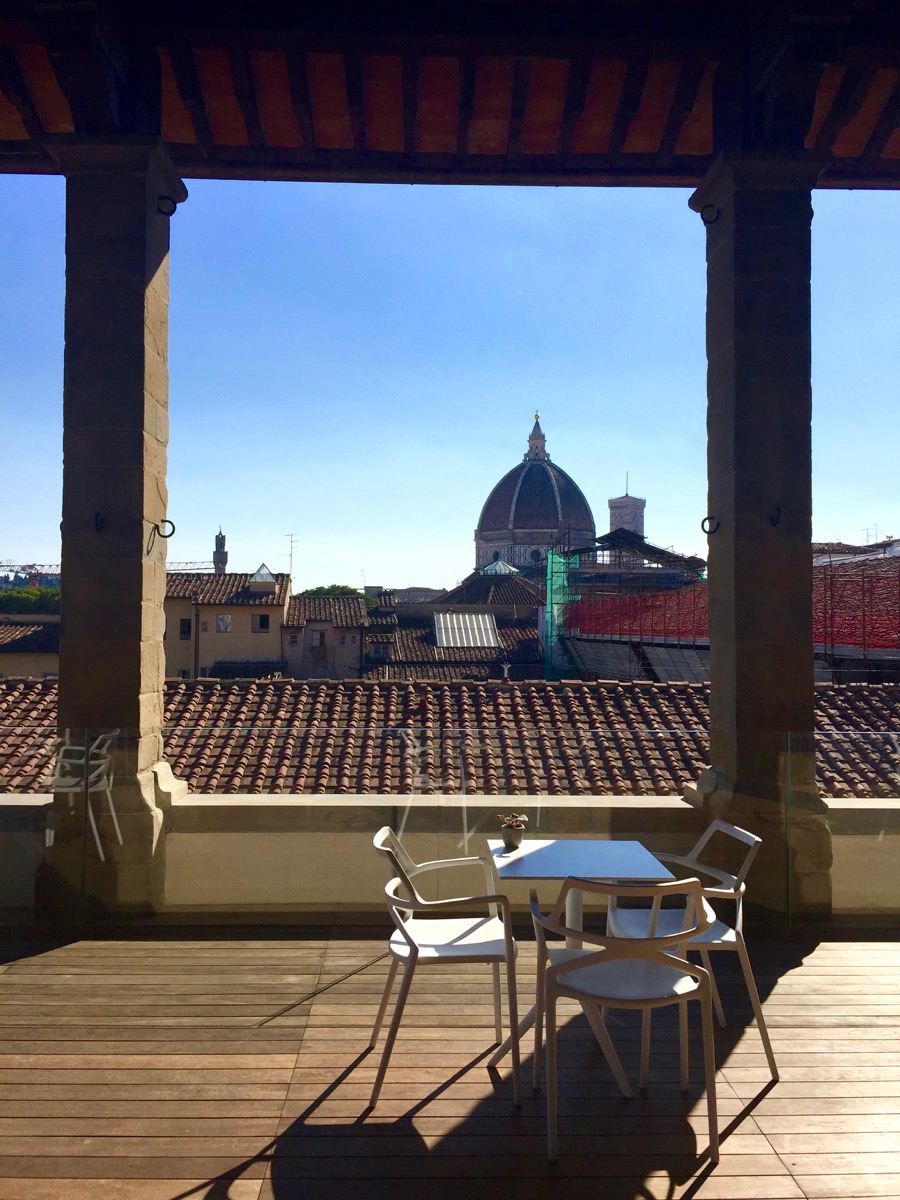 Need a guide to help take you through the museum? I recommend Alexandra Lawrence who is pretty passionate about this place and tell you all of the backstories that you won’t get from a sole visit. Also my friend Alexandra Korey wrote a great blog post about the museum and knows decidedly more than I do about this subject since she has a phD in art history, definitely worth a read.