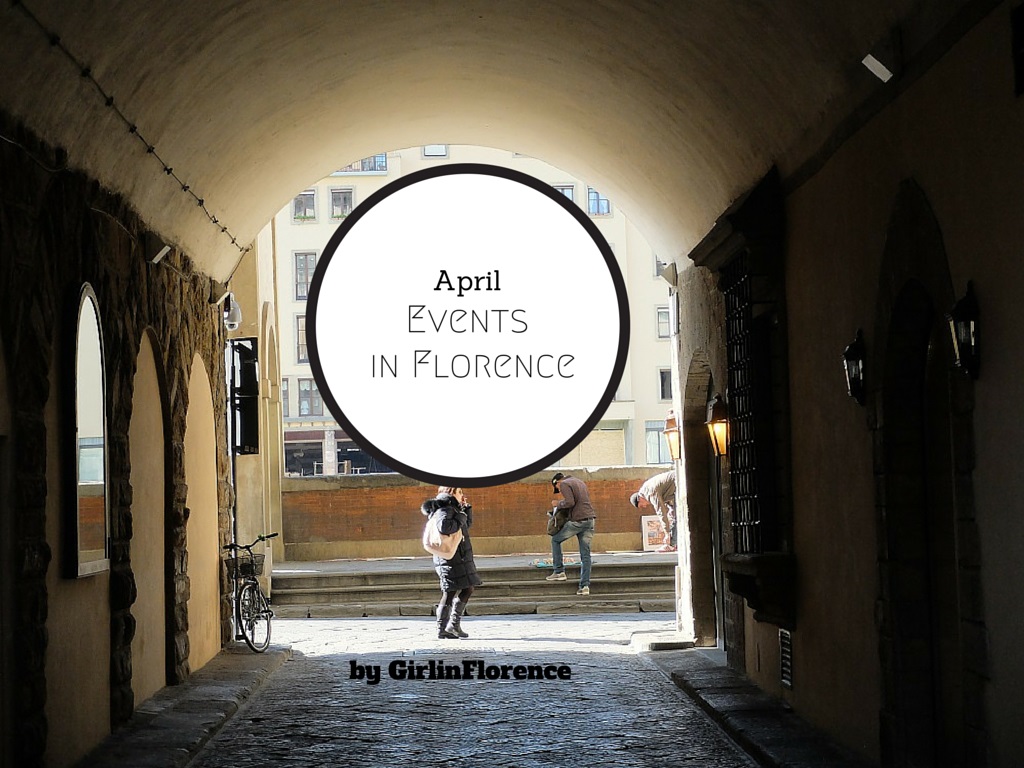 “April is a promise that May is bound to keep.” – Hal Borland

We are all rushing to throw aside our winter boots, heavy coats and mildewed umbrellas, but wait just one second there. As the quote above says, the weather is as unpredictable as an ATAF bus schedule. On the other hand, I am so happy that this month is packed with cool events. From new art exhibits, bike fairs, street food, Easter fun and much more. I am really excited about this even if I will be so busy, I may have to miss some of the very events I was most looking forward to due to travel and blog stuff. I will be adding to this list as the month goes on and if you have any suggestions that you think I should add, let me know! Here is the official list of events by the city.

It’s back and this Easter coincides with ‘free’ first Sundays (every first Sunday of the month has now become a ‘Free Museum Sunday’ which means state and municipal museums are free to everyone, this includes the Uffizi Gallery, Palazzo Pitti, the Gallery Academy and the Medici Chapels to name a few. I adore #Domenicalmuseo and this makes for a great excuse to walk off Easter lunch with a few museum visits. Find the full list of participating museums in Tuscany here.  Remember that Monday is also a holiday (Pasquetta) but a few Medici villas will be open to the public, Petraia (8.15am – 6.30pm), Poggio a Caiano (8.15am – 6.30pm) and Cerreto Guidi (9am – 6pm) via Tuscany Arts.

Community | Yelp events: All of April around Florence

Call me a broken record but, I think the yelpers are a pretty fun crowd. April looks like a lot of fun. One event that stand out to me is a photography workshop on April 19th. This is a wonderful way to get more involved with locals who are open to meeting new people so attend one of the events and see for yourself. See more events here.

One of the biggest events in Florence, the explosion of the wooden cart attracts thousands of spectators. This famous Florentine ceremony dates back to the distant times of the First Crusade, launched to free the Holy Sepulcher from the hands of the infidels. Florence in all of its garb will be out and about and you will see one of the coolest historical parades and finales in the city. My recommendation is to get there early (like 9) as it often gets so crowded by even 10am, that you can’t get a prime spot. Last year I happened to be squeezed in the crowds so for your viewing pleasure, you can see what to expect via this youtube video I shot last year. It is quite spectacular.

This interesting cinematic event is in its 6th year and is probably one of my favorite film festivals in Florence, there is always a great program of films that normally blow me away. In addition there will be photography, contemporary art, music, food, talks, special events, and much more. The festival has the aim to discover the Middle East in all its facets, to represent its complex cultural and social scenarios. Especially considering all of the tensions in that area, I find these films as a way of self-expression of many of those who live first-hand in countries we don’t really know that much about. Official site is here. and check out the full program (also in English) here.

I am so excited about this StreEAT Food Truck festival and I might actually have to miss it (god I hope not) since this month is crazy for work and blog tours. But for you hungry folks who love street food, this sounds so cool and has taken place all over Italy. Facebook page. Free to visit and being your appetite (and your wallets).

The 32nd half marathon includes a ‘mere’ 21 kilometers (and some change). The good news is that there is something for everyone. Participants can also choose to do a 5km walk or 10 km non-competitive race. My favorite part about this is the kids race “Tommasino Run” which lasts 1,5 km (which is the one that I would be most appropriate for). The race will take place mainly in the historical center, sign up for one of the races here.

One of those initiatives that I think is so special, a free night at the movies, starting on the 14th of this month on selected Tuesdays. The cool thing about this season is that they are teaming up with Palazzo Strozzi who just opened their new ‘Power and Pathos’ exhibit and thus the films will center around themes of classical civilization and modern film-making. This month the films will be Oliver Stone’s Alexander and Pier Paolo Pasolini’s Medea.

Bike lovers rejoice, you have your very own fair to check out the latest in bike technology, stands, people with their bikes and more. A fair dedicated all to bike nerds around the world, open to the public and free entry. See more detauls via their Facebook page.

Vintage lovers and bearded hipsters alike will love this bike ride asking participants to put on their best antique garb. This is when your trips to the thrift shop will pay off. It is actually part of the bike festival and part of the proceeds will go straight to charity (Florence’s Meyer Children’s Hospital). There will also be a contest for ‘best dressed gentleman, lady, bicycle, mustache, and group’.  Time? 11am – 3pm. Distance? Around 10 km in some of the nicest areas of the city. To see more details and sign up, check here.

From 5 to 10 Kilometers all in the name of combatting breast cancer and violence against women, this run is in its 18th edition. This worthy event is coming to Florence on the 19th and you still have time to sign up (until the 16th). Facebook. For those who aren’t into running, head to the piazza anyway for live music and Avon products.

One of Europe’s biggest arts & crafts fair is coming back to town with the annual Mostra dell’artgianato, this fair has been running since 1931 and is such fun, I look forward to it every year. Avoid the weekend crowds and go during the weekdays so you can browse goods from all over the world to yourself. Where? Fortezza da Basso (Viale Strozzi, near station). Official website.

Digital Invasion | #InvasioniDigitali culture intiative from April 24th – May 3rd. All over Tuscany.

I had a lot of fun participating in this grassroots initiative that began in 2013, trying to merge together culture and the digital world. The point is to invade famous spaces and showcase them in a digital format, whether that be photos, blog posts, sharing fun facts. I participated in one last year in Liguria and I am very excited to see what this year has in store. Check out the official site here.

I love this weekend because there are so many fun events in Florence. I adore this spring plant fair because the location is beautiful and there are so many reasons to get a green thumb by looking at all of the cool plants out there. It’s a great time to stock up on herbs and exotic plants like lovely lavender. Where? il Giardino dell’Orticoltura, address: via Vittorio Emanuele II, 4 (near far end of piazza Libertà). 9am -7pm. Free to go!

A pretty garden off piazzale michelangelo (east balcony), the Iris garden with over 3000 different types has a brief but worth lifespan and is fun to visit along with the rose garden below the piazzale. I recommend walking otherwise you can take the number 12 or 13 bus to the top, direction piazzale michelangelo. There are guided visits that you can make a reservation for, in both Italian and English, read more about that here. The iris flower is the symbol of Florence, think of the ‘giglio’ that you often hear about. Free to visit!

From april 26th onward, Florence will host the work of Antony Gormley, one of the most acclaimed sculptors working today. The exhibition Human follows on from the success of exhibitions by Zhang Huan, which marked the reopening of the Forte di Belvedere in 2013 and Giuseppe Penone in 2014. Curated by Sergio Risaliti and Arabella Natalini, Human brings together over one hundred works by Gormley in the inner rooms of the villa, the bastions, the staircases and the terraces, to occupy every side of the 16th century fortress with its extraordinary views over the city and the surrounding hills. Open daily 10am – 8pm, excluding Mondays. Read more here. address: Via di San Leonardo, 1.

This year the city has decided to embrace a ‘black night’ theme organized by MUS.E. I checked out their press release (with little information), where I read that you can only find the light through the magnetism of the dark (so poetic). The focus will be mainly on live music concerts around town, especially in the oltrarno. I think the city wants to get away from this being a huge booze fest. Also this will mark the start of a longer ‘Estate Fiorentina’ (Florentine Summer) which coincides with events at this year’s expo in Milan. Naturally on the first of April there is little to no information about any of the events in English, but I would recommend following them on facebook and checking out their site. #nottebiancafirenze