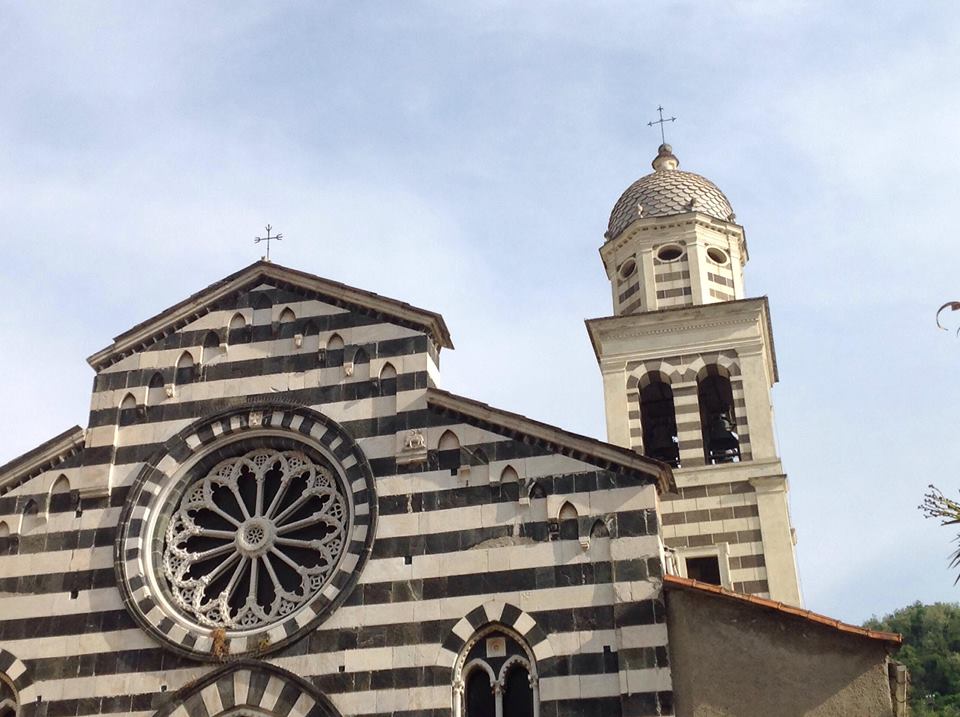 The gorgeous facade of La Chiesa di Sant’Andrea in Levanto

Levanto was once called Ceula during its settlement in the Roman times, and was a place of economic importance during the Medieval times, especially for the famous pilgrim’s route – via francigena, keep an eye out for a “caruggi”(small ligurian street) .

My first time in Liguria, one aspect that really stuck with me about this place was just how nice everyone was there – genuine smiles, buongiorno’s and helpful advice, surely it must be due to  all of that glorious sun and close proximity to the beach ( I will touch on some cool activities to do in my next post so stay tuned!)

What brought me there was a culture/digital meetup #invasionidigitali #levanto4u #welevantowith various other awesome Italian bloggers and instagrammers all looking to explore this pretty town in order to share with the wider world why its worth visiting places like this. We roomed at a little B&B La Gerbere, perfect for exploring the town with a pretty couryard/garden, plus how can you not love bathroom lights  that change colors, an interesting touch, I felt like being in a disco while taking a shower.

Ps* There are many so many small B&B’s and hotels that are really affordable, especially compared to Cinque Terre and I personally enjoyed that the town was a little bigger, especially during nighttime – rather than staying in Cinque Terre itself. Unless you are looking for a really quiet evening, staying in a nearby village like this is usually a great idea.

After dropping our stuff off and fueling up with a plate of my favorite spaghetti alle vongole veraci (a lovely pasta dish with sautéed clams – it will change your life) together with some lovely white local vermentino wine we met the other #invasionidigitali members in piazza cavour, home to the comune and formerly the Monastero delle Ordine di Santa Chiara (Monastery of the Order of St Claire) for a guided tour of town. This village was a center of commercial activity during the Medieval times, especially for routes such as the famous via francigena.

Our guide Aldo Viviani was passionate about the history of this town and thanks to him, I now consider myself a semi-Levanto expert ready to carry on its maritime traditions ;-). We visited an artisan studio located in the same old monastery featuring a dozen life-sized wooden figures depicted traditional Levantesi arts & crafts by the talented Emanuele Luzzati.

After getting a much-needed coffee, I spotted some interesting murals underneath one of the main throughways running through the center of town. I am not sure the story behind them, but each seemed to depict scenes that were USA-centric, even one depicting the idea of the ‘American Dream’. I’d love to find out why they were there and who painting them.. If anyone has any ideas – let me know!

I also recommend heading to the old casino hall on the waterfront for a spritz or a morning cappuccino, I love that they have retained this historical building that once hosted the most important Italian singers in the 1960’s. Also UNESCO has made their mark even here, by declaring the 13th century Medieval Loggia as a monument being evidence of peace and culture – located in the piazza del Popolo.

During our trek around this small town, one of the coolest sights we got to see was most definitely the Goblet of Henry VIII {in the Church of San’Andrea}, nothing short of glorious and not often shown to the public. Legend has it that it was won by Gioacchino Da Passano during a game of chess with Henry VIII.

Obviously after all of that history and walking, I was granted a certification of completion for  my very first #invasionidigitali [digital invasion] – yes I am very proud of anything printed, stamped and including a hashtag ;-). If you ever get the chance to check out these meetups, do so! It’s fun and you actually learn something, plus make it an excuse to deserve that aperitivo afterwards.

Of course what trip would it be without food? Naturally we all needed an aperitivo after this tour so we headed to the awesome Salty Dog bar [yep that’s the name] for some great local white wine, a lovely vermentino from the colline di levanto and local snacks. This place was really cool, quotes from famous books covered the walls, bookshelves stuffed with books and photos everywhere — definitely a place I could call home for an evening with its relaxed vibe and nice people. 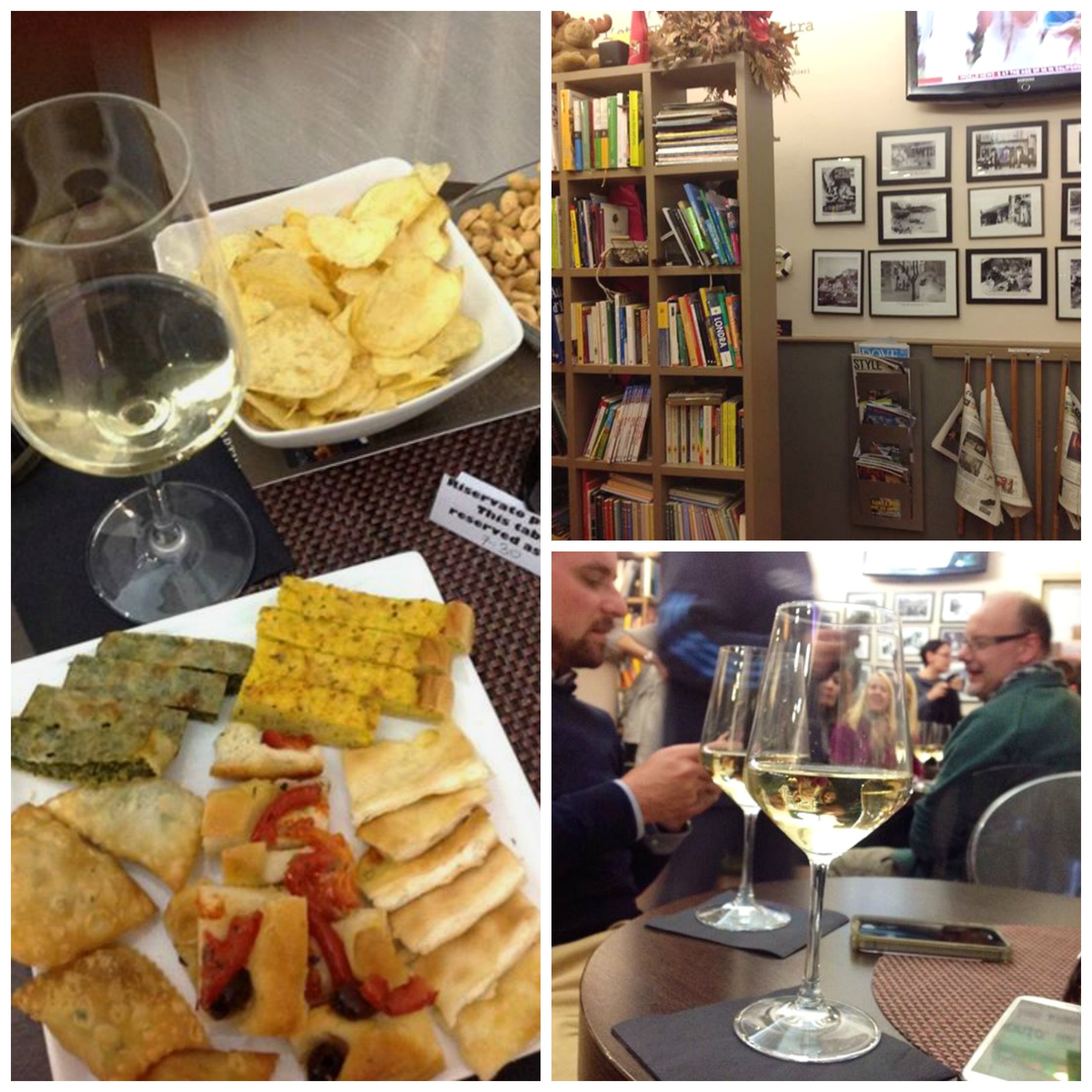 At the Salty Dog, we tried a variety of food, herbed-stuffed pastries called Gattafin – literally my new favorite food on earth (well close). So delicate, the pastry reminding me very much of a samosa with it’s deep fried texture. I can understand why Italian women packed these for their menfolk as they worked away for the day in the nearby hills. Tasty, simple, savoury – everything you want in a snack.

One thing I noticed when touring earlier in the day at the comune was a certificate hung in the major’s office citing that Levanto is part of the “Città Slow”,  which is an award given by the “Slow Food” association that recognises the quality of local wines, traditional cuisine and the general quality of life.

Also we mustn’t forget about the famous pesto, a beautiful rich green, ours was made with trofie pasta [short, thin & twisty] with a few potatoes mixed in. Absolutely delicious (and easy) dish to make at home.

To see our tour via video - check out this awesome video showcasing the highlights with Aldo![youtube http://www.youtube.com/watch?v=LjSEIggG0ac]

What monuments not to miss

Obviously it’s probably most beautiful during the warmer months, but I would even consider visiting during September or the beginning of October when it’s less full of people. If you are looking for a truly special experience, come on the 25th of July: during the feast of S. Giacomo, patron of Levanto. More than 10,000 people head to Levanto during this time and its festa all around!

** My next post will cover what to do while in Levanto (besides touring the old town) so stay tuned! If you’ve been and you recommend something to do/see/eat let me know by commenting!!!