Leonardo di ser Piero da Vinci, more commonly Leonardo da Vincior simply Leonardo, was an Italian polymath of the Renaissance that you most certainly have heard of, and mostly likely also admired. His most famous works speak for themselves, The Last Supper and the Mona Lisa, and his drawing of Vitruvian Man is the classic representation of the true Renaissance spirit.

But what about the man beyond the mystery? After all this is a man who designed an armored car, a scythed chariot, a pile driver, a revolving crane, a pulley, a lagoon dredge, and a flying ship.

You can find his supposed finger in the Science museum in Florence and gaze at his amazing artworks at the Uffizi and other famous museums around the world, but to get a true understanding of this man and his humble beginning you have to head to the vibrant and verdant hills of Montalbano in the province of Florence, to Vinci, a quiet Tuscan town dating back to the early middle ages. 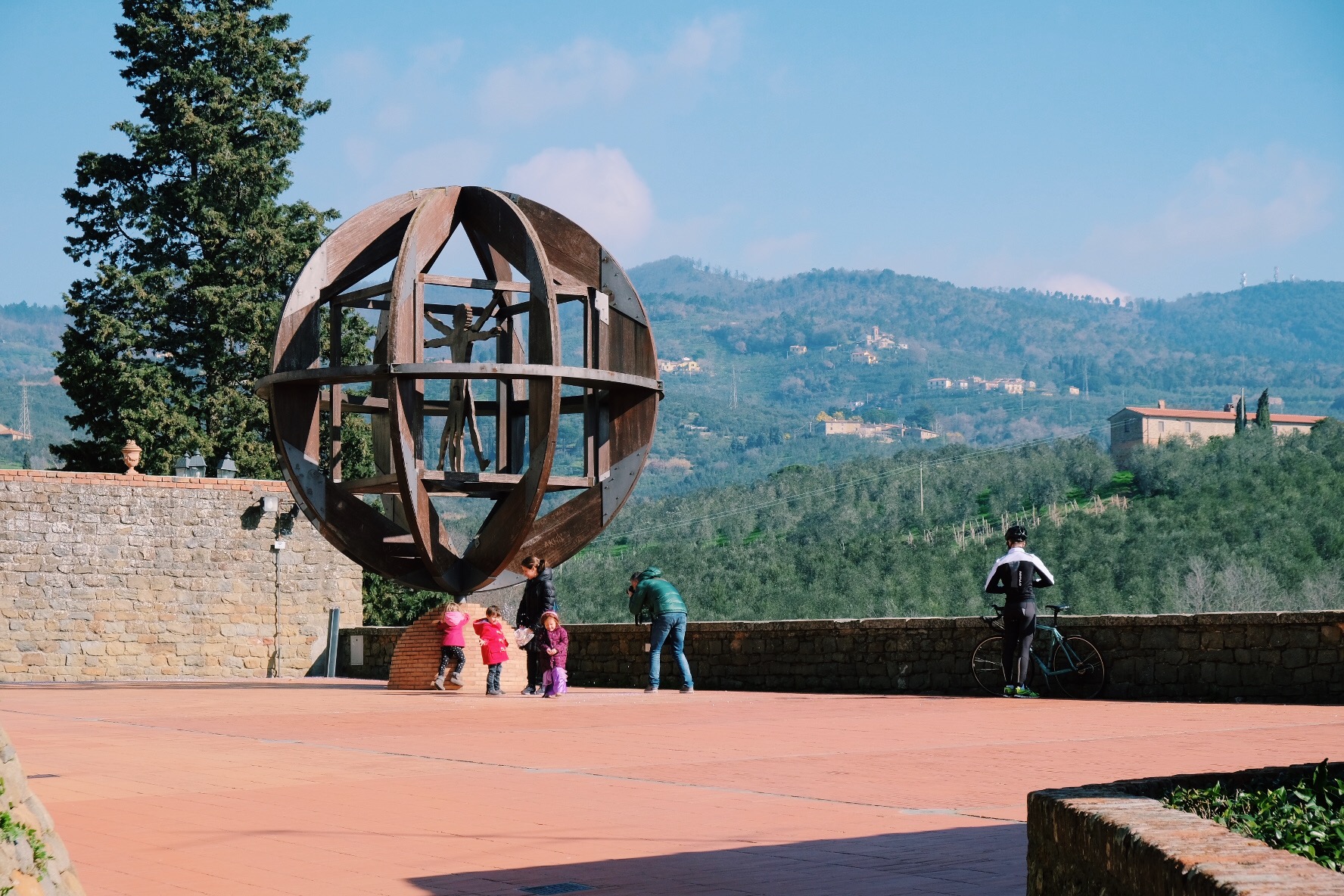 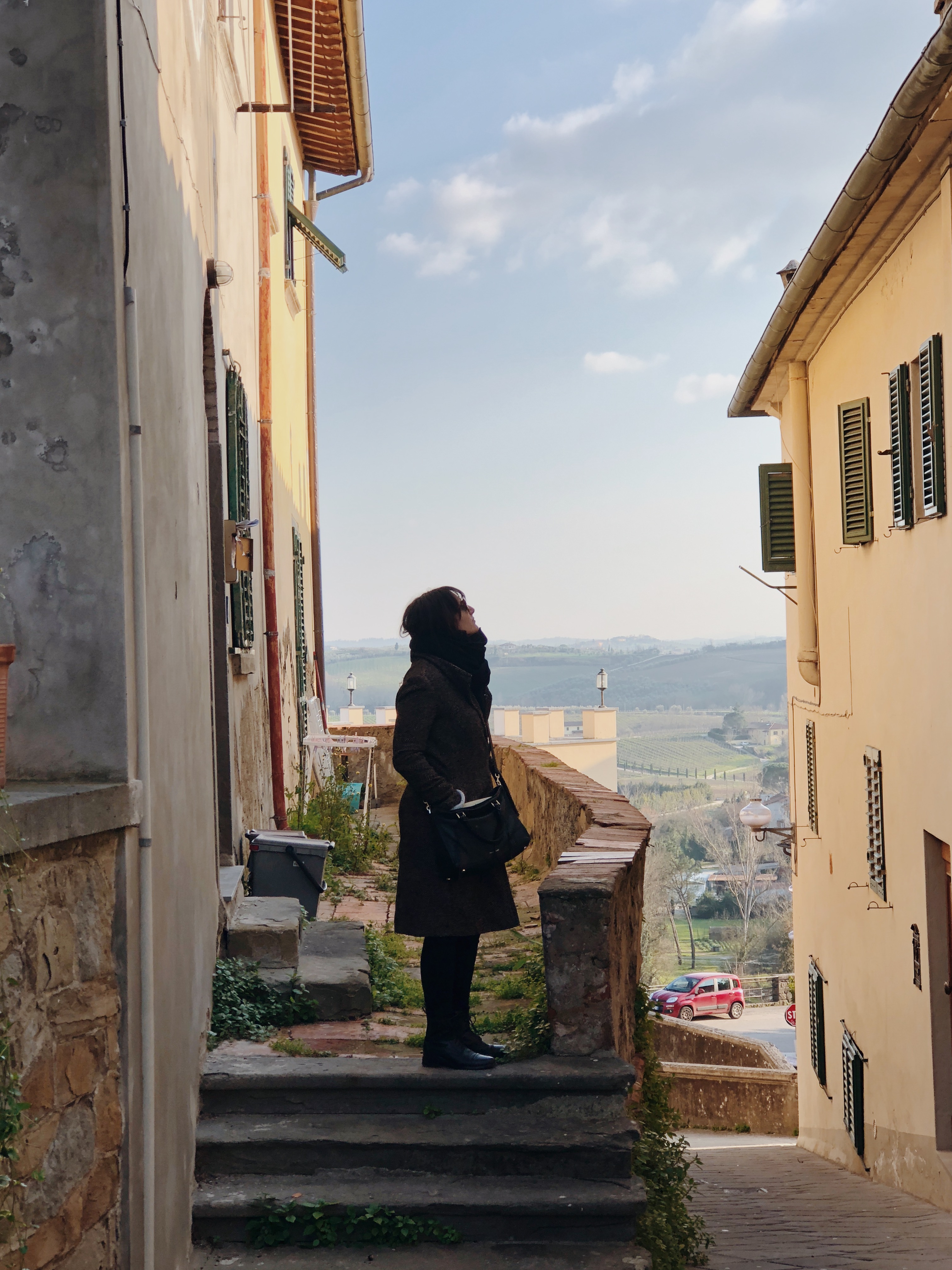 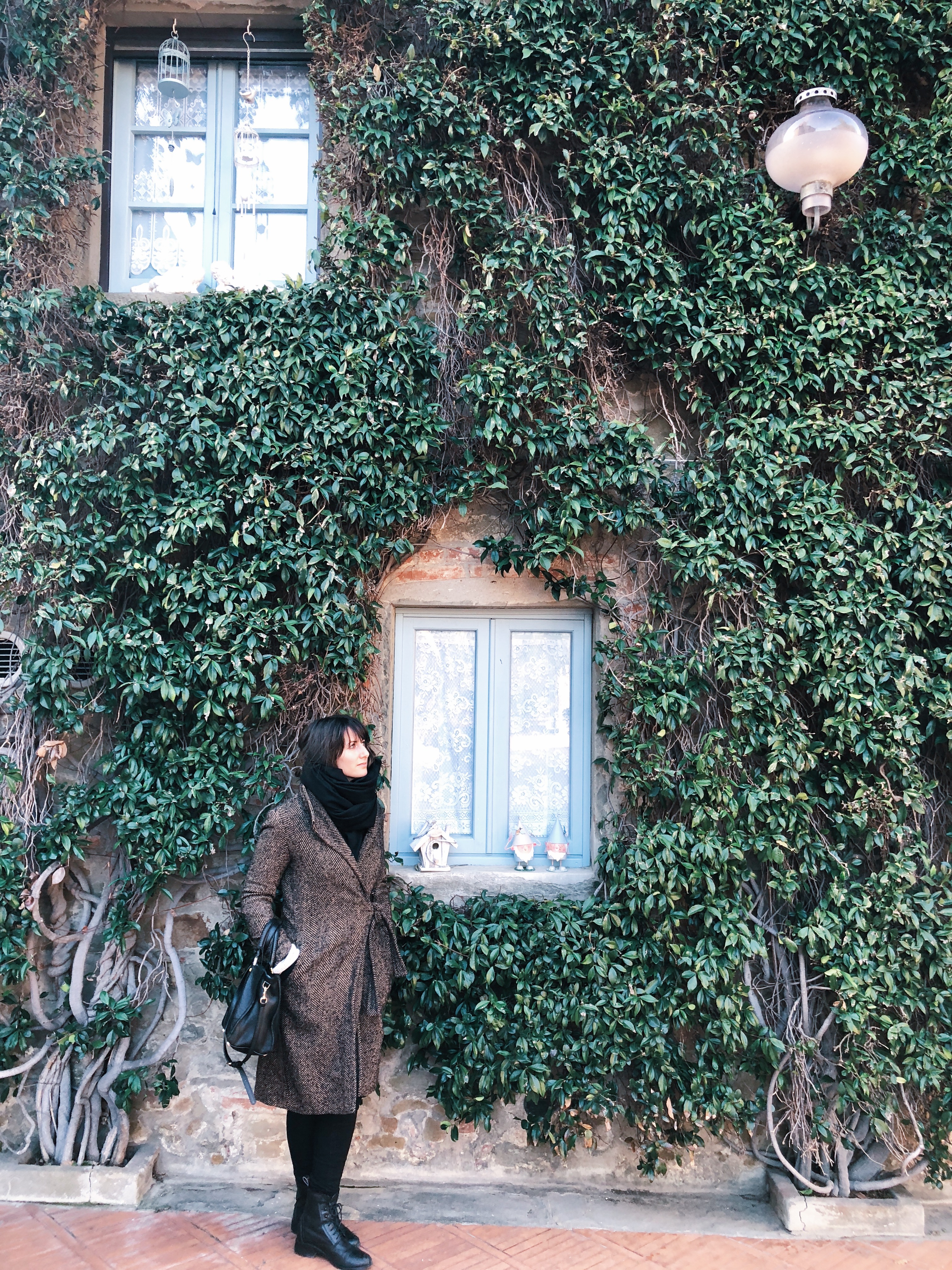 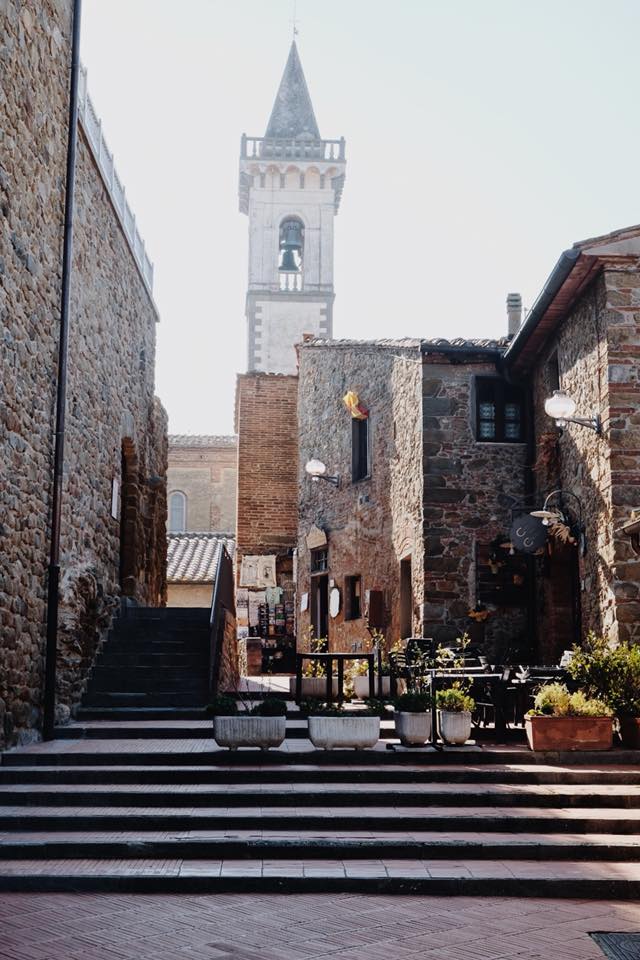 Born the love child of a notary and a peasant on April 15, 1452 near the Tuscan town of Vinci (hence “da Vinci”), he later became one of the most important visionaries of his generation– the archetype of a quintessential “Renaissance man.” One that is the ultimate multi-tasker – a painter, an artist, an engineer, inventor, anatomist, and a rather complicated personality as all geniuses usually prove to be.

I didn’t manage to get there until earlier this year, a whimsical, last-minute decision with my good friend Jehan. These little getaways are my chicken soup for the soul, as working from home can be an often isolating and lonely endeavor. We hopped onto a train where we were met by my contact for Vinci, the lovely Francesca who works with the local tourism office, a natural first stop on any visit as they carry a wealth of info and can let you know the best route to Leonardo’s birthplace home. Here’s a helpful map below of the town’s main sites. 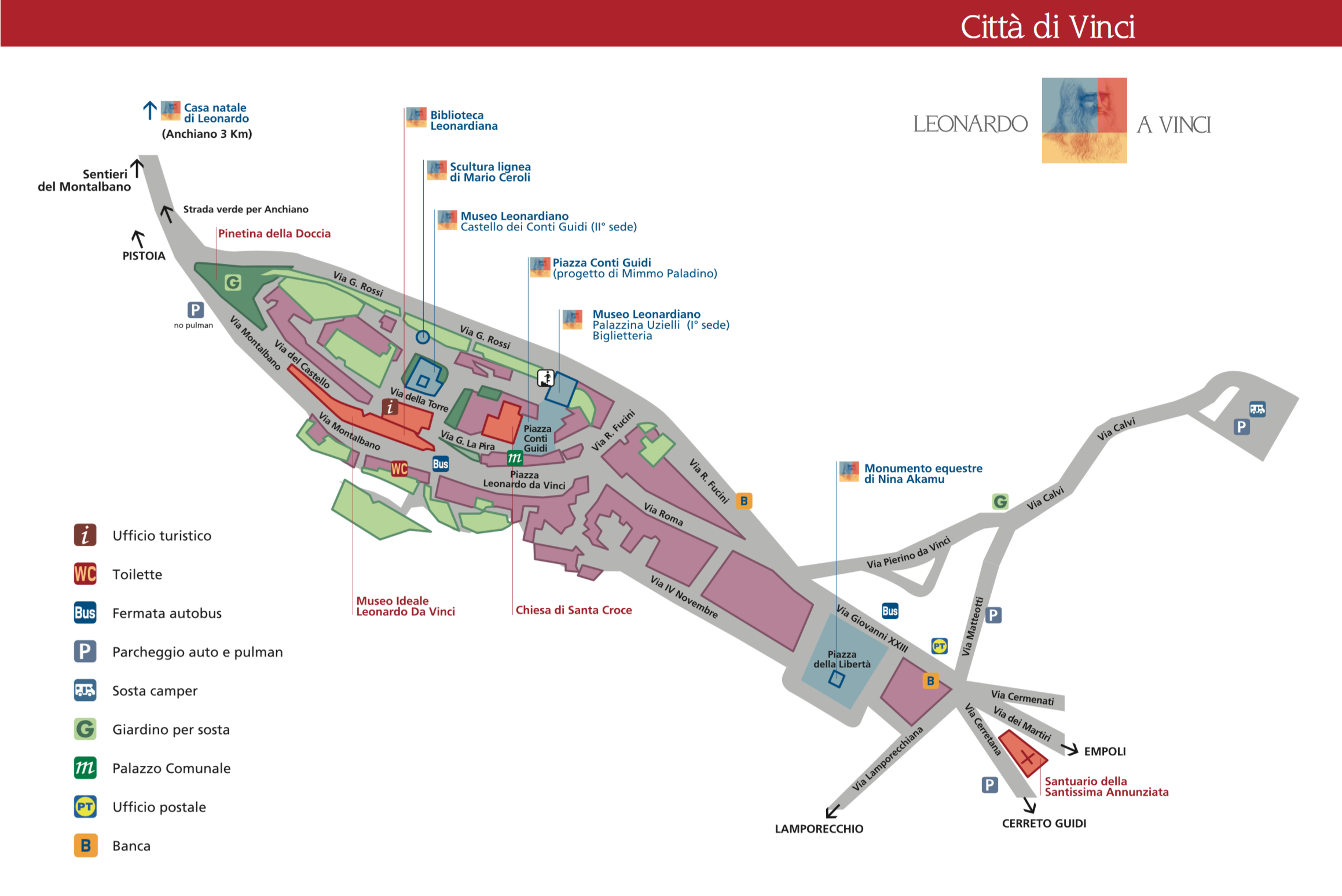 For anyone wondering about the authenticity of this place as THE place of Leonardo’s birth, keep in mind that the Biblioteca Leonardiana in Vinci remains the international center of Leonardo studies, first opened in 1928. It serves as an international reference point for scholars and amateur enthusiasts alike. Here you will find a facsimile reproduction of all Leonardo’s manuscripts and drawings, as well as all the printed editions of his works from the early 1600s onwards. They also have archived everything in an online database appropriately named “e-leo.” 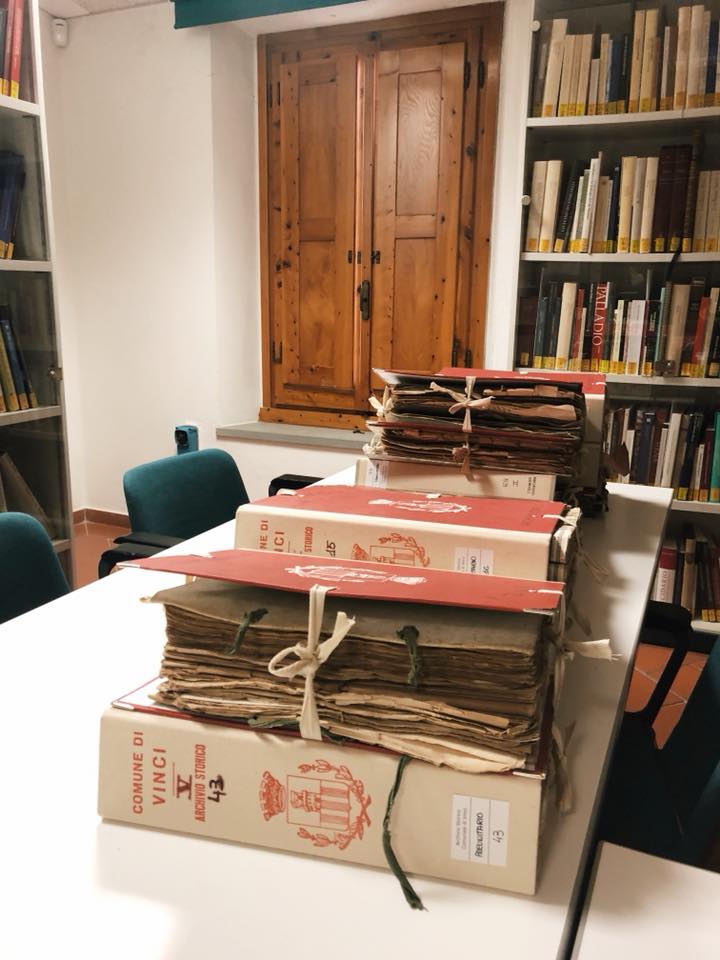 Getting to Know the Man Behind the Mystery

One of the first stops would be to start at the Church of Santa Croce (of the Holy Cross)where Leonardo was baptized as an infant. You can check the tablet recording his birth written by his grandfather Antonio DaVinci and a fascinating sculpture cycle by Cecco Bonanotte. 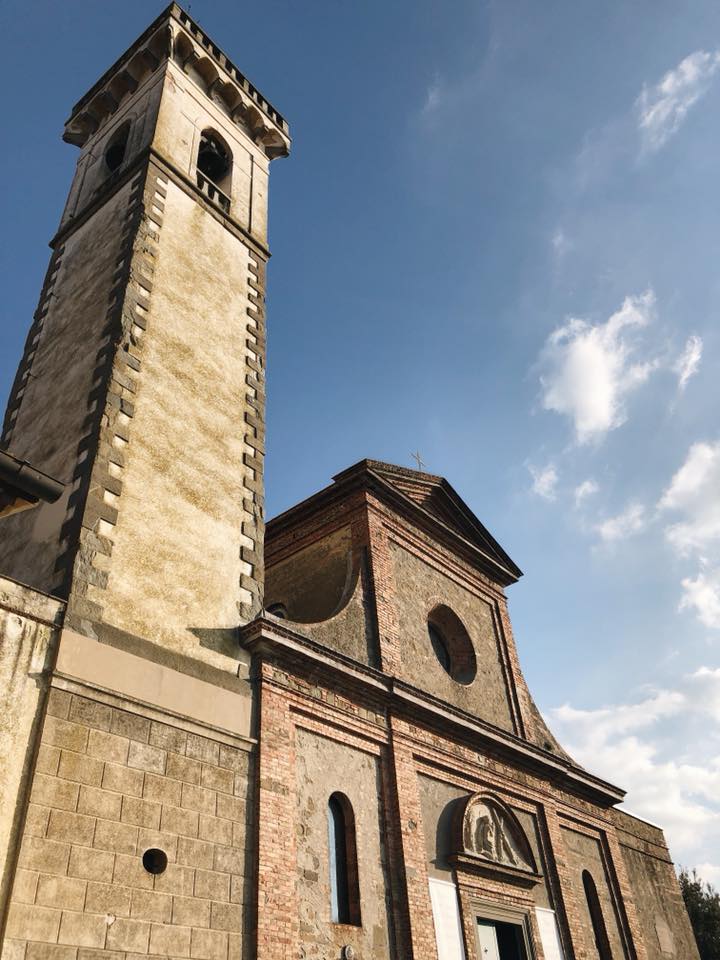 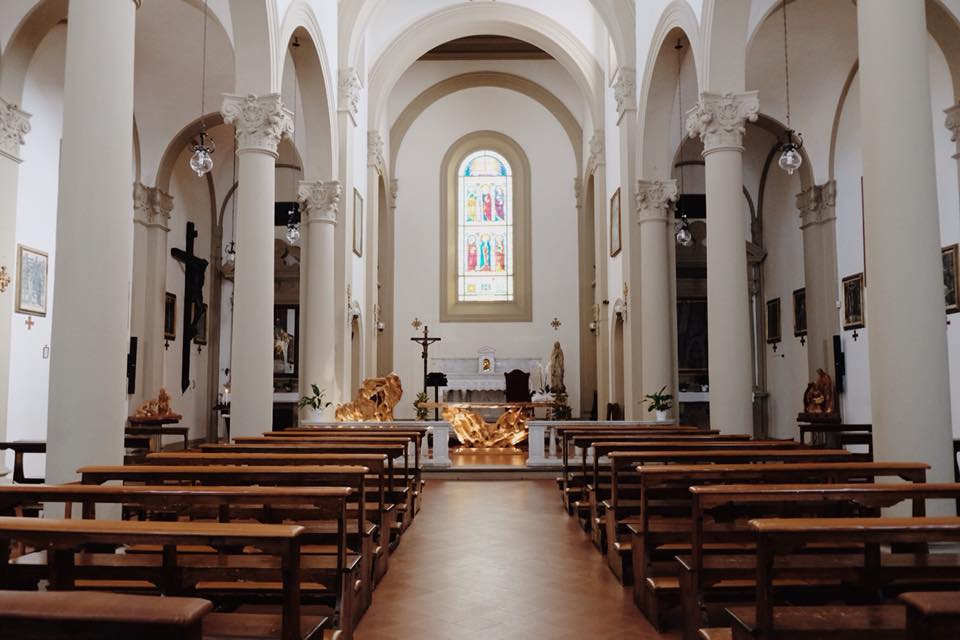 The Leonardo Museumis located at the Palazzina Uzielli and the Conti Guidi Castle. It hosts one of the most extensive and original collections devoted to Leonardo the scientist, the engineer, and the architect and more generally, to the History of Renaissance technics.

The exhibition route is well laid out and fascinating for all ages, presenting machines and models accompanied by specific references to the artist’s sketches and handwritten notes, which are also supplemented by digital animations and interactive applications.

You can explore what inspired Leonardo (for example he was fascinated by the hoists and cranes invented by Filippo Brunelleschi to build the cupola) and discover studies on flight and fluvial navigation (and the route of rivers) designs of war machines, experiments on optics and on textile machines. Leonardo’s wide interests are all documented in the museum, including a very fascinating section about Leonardo and Anatomy, focusing on his studies of the human body and even a special section on bicycles! 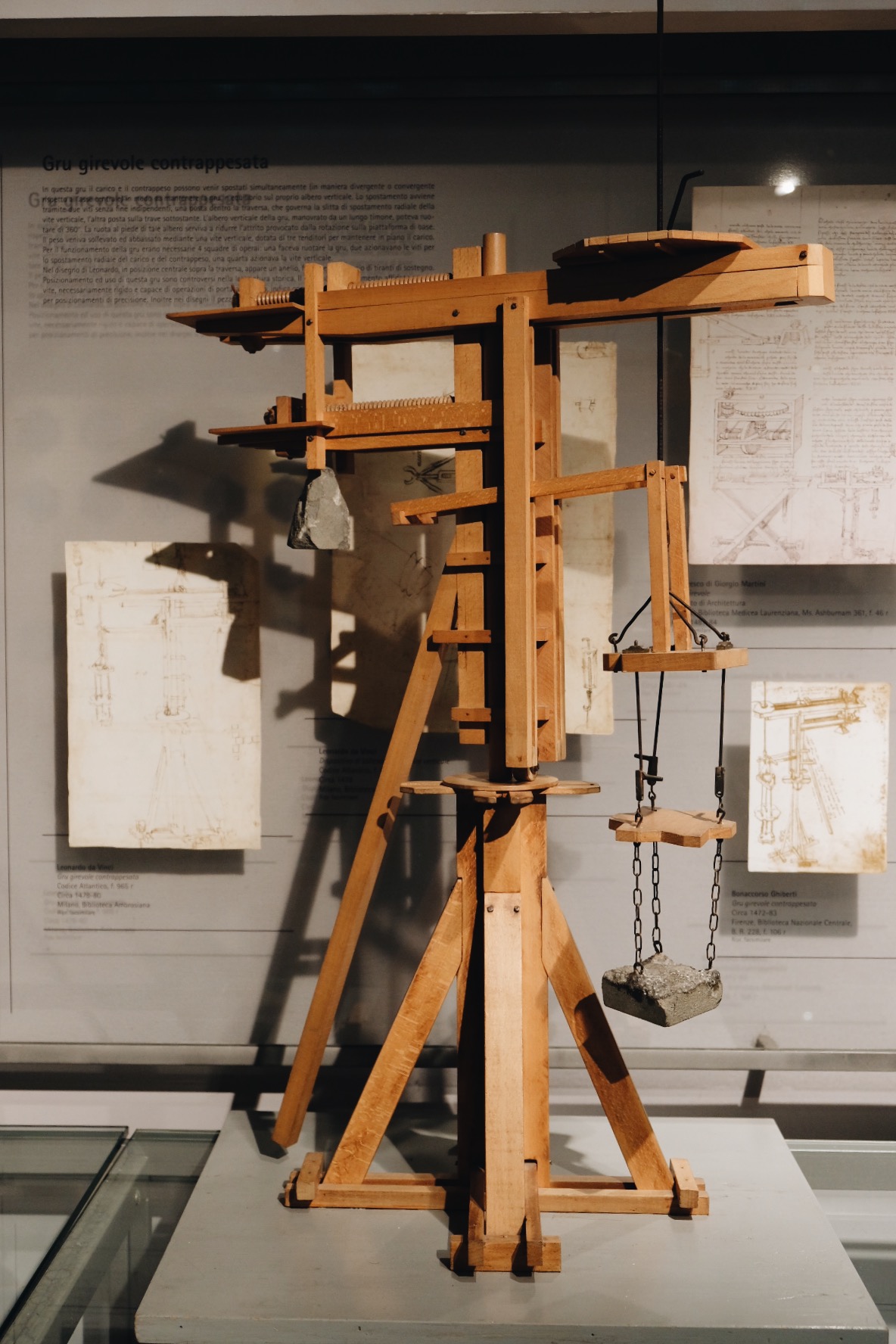 The terrace of the Guidi Count’s Castle (with over 100 steps – be warned) offers a breath-taking panorama of the Montalbano hills, a great inspiration for Leonardo throughout his entire life. 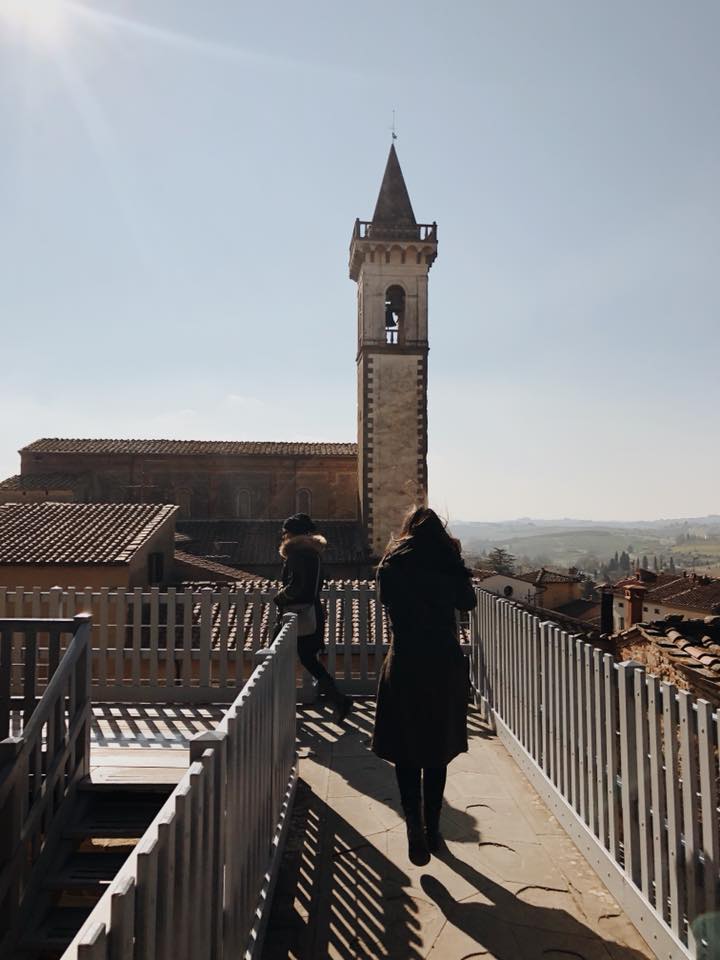 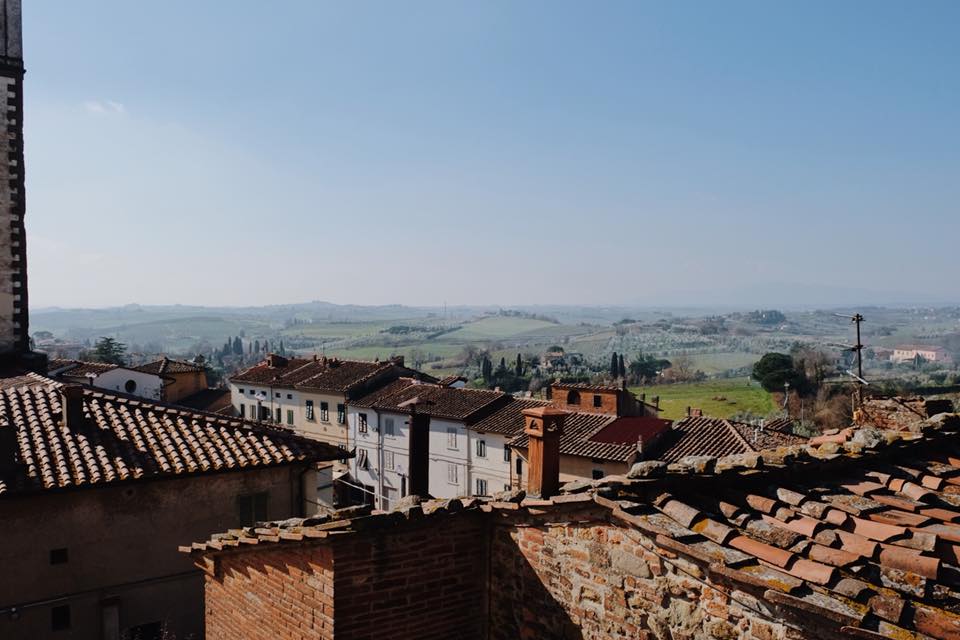 You can’t miss DaVinci’s Man, a large wooden sculpture by Mario Ceroli behind the Conti Guidi Castle, this impressive work was inspired from the world-famous drawing held in the Venice Gallerie dell’Accademia, in which Leonardo gives a visual representation of the idea of proportion expressed by Marcus Vitruvius Pollio in his treatise de architectura. 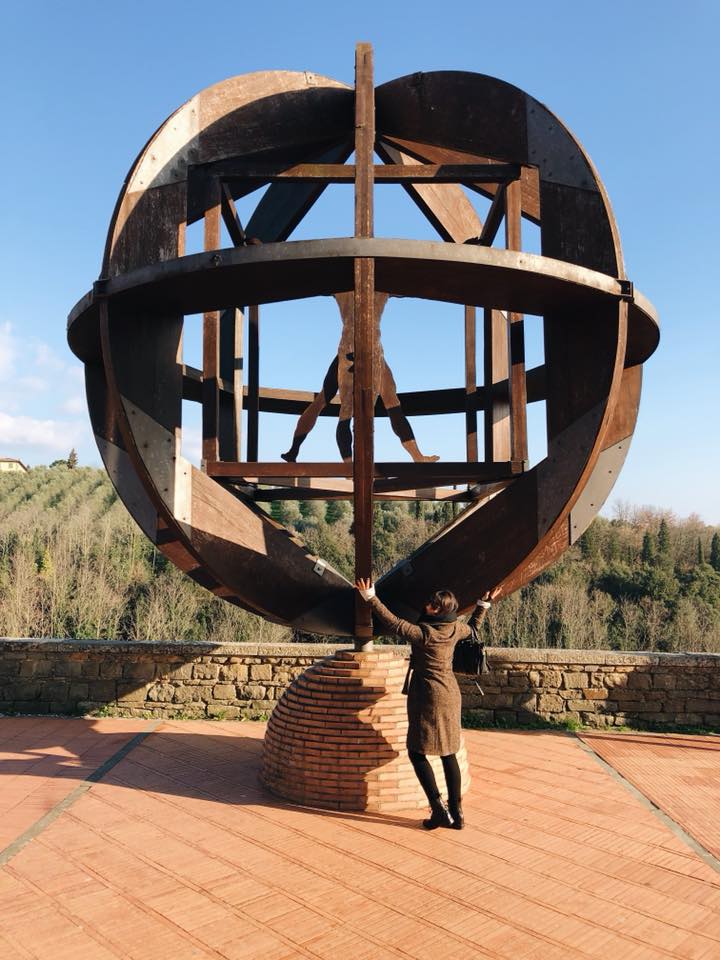 Another notable work is Leonardo’s “horse”, a bronze monument by the sculptress Nina Akamu located in Piazza della Libertà. It was inspired by Leonardo’s unfinished project for a colossal statue in honor of Francesco Sforza, something Leonardo worked on during his first period in Milan. It seems that this captured the heart of Charles Dent – a passionate admirer of the Italian Renaissance in 1977.

He was so captivated by the idea of bringing Leonardo’s unsuccessful experiment to fulfilment that he set up a special foundation in Pennsylvania solely for this purpose, the Leonardo da Vinci’s Horse Foundation. They then commissioned Akamu to bring the idea to reality and the finished sculpture was donated to the town in 2001.

Before going in the Palazzina Uzielli you probably will pass through the Piazza dei Guidi, a unique space created by the artist Mimmo Paladino who won a competition in 2003. Paladino’s work, with its eye-catching geometric and abstract shapes inspired by the polyhedron, symbol of the Renaissance, recalls Leonardo’s trust in geometry while giving shape offering an original and evocative contemporary urban space in the heart of Vinci’s historical center. 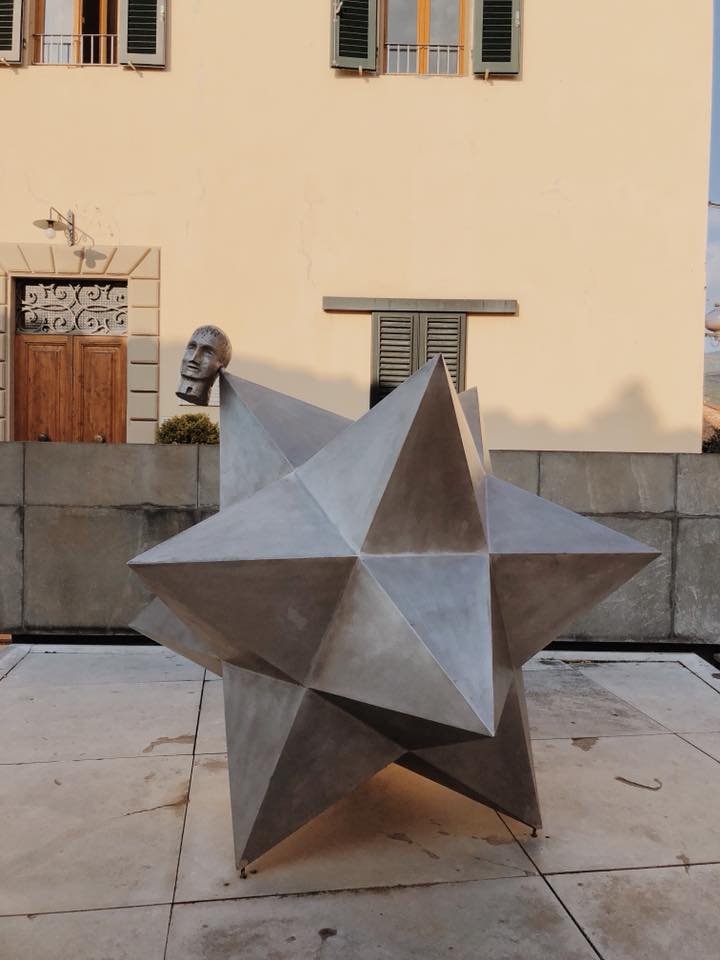 The home of Leonardo’s actual birth isn’t inside of Vinci itself but a bit further down the road in the quiet area of Anchiano. It is well worth making the trek along the strada verde as the small house-museum explains more about the history of his life complete with a life-size hologram of the man himself, a surprising addition in such an isolated and rural place and the chance to interactively “play” with some of his most famous works. 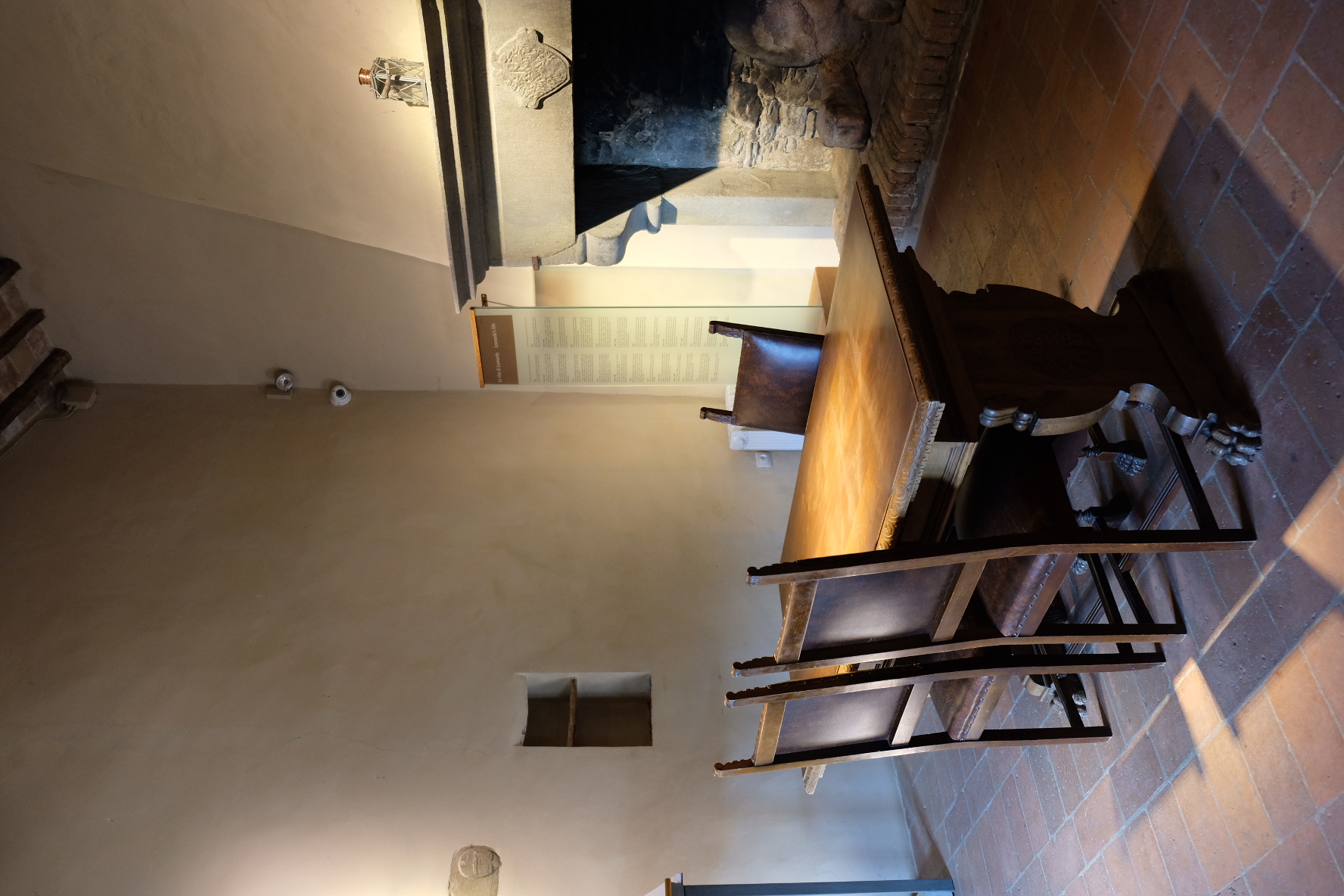 Check out this fascinating visit from 1952 when they first inaugurated the house museum to the public!

The Arno Valley, the Fucecchio Marshes, Vinci and the Montalbano hills are often depicted in Leonardo’s maps and in his famous landscape drawings. This house is also at the center of a network of paths crisscrossing the Montalbano valley, the ideal starting-point for walking excursions into the surrounding areas, naturally along a quest to find the places and the scenery which inspired the great genius.

Naturally no day-trip or visit could possibly be complete without a delicious place for lunch. This area of Tuscany is well-known for its excellent olive oil and bold wines, specifically Chianti Montespertoli and Chianti Colli Fiorentini both of which you can find at my favorite lunch spot, “Da Pippo”, a rustic, no-frills Tuscan eatery located within the tiny, historical center.

Fancy it is not, but they do serve piping hot, salty schiacciata, a great pappardelle al cinghiale (wild boar pasta) and carne alla brace (mixed grilled meats) that will more than be sufficient for lunch with a side of people-watching. 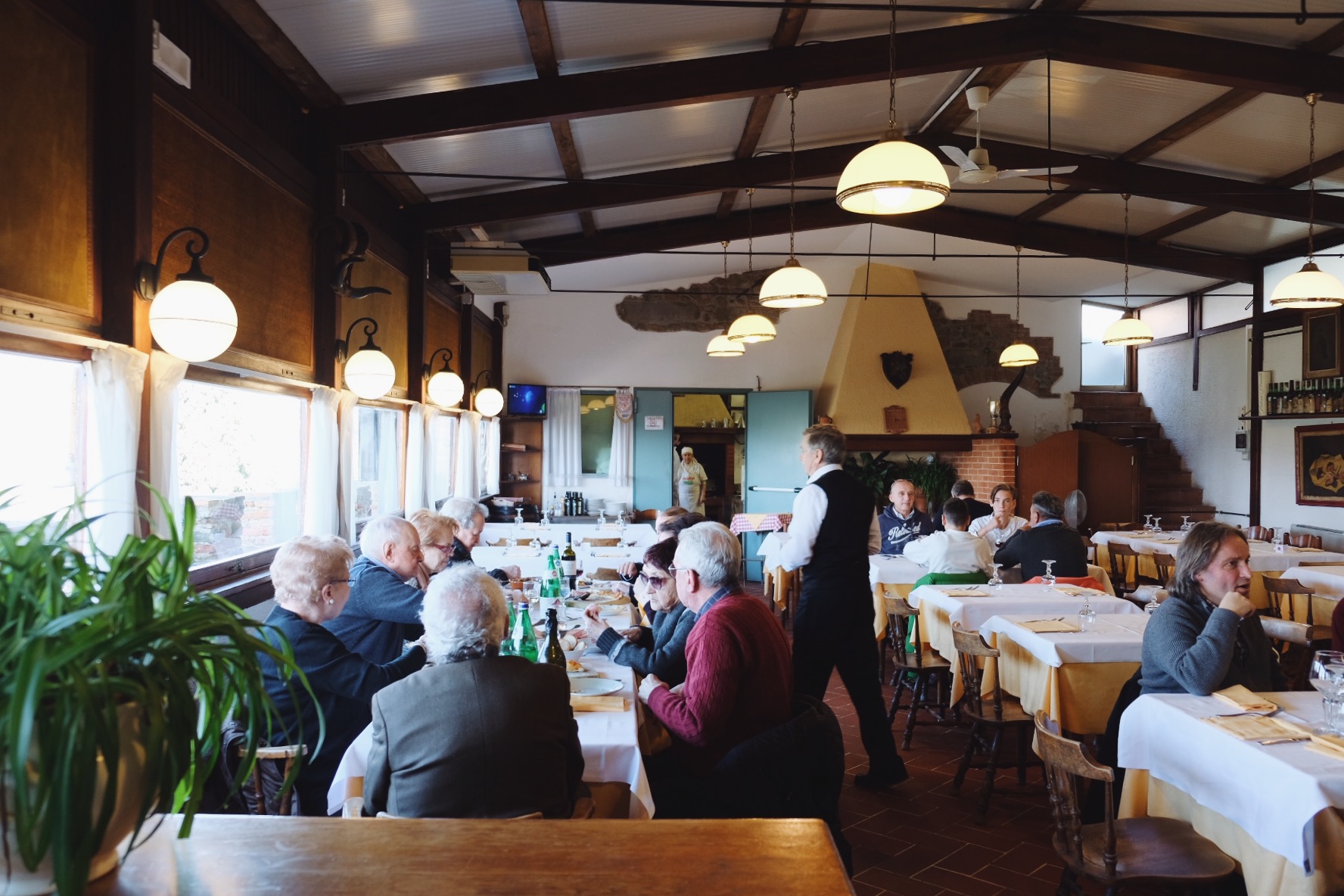 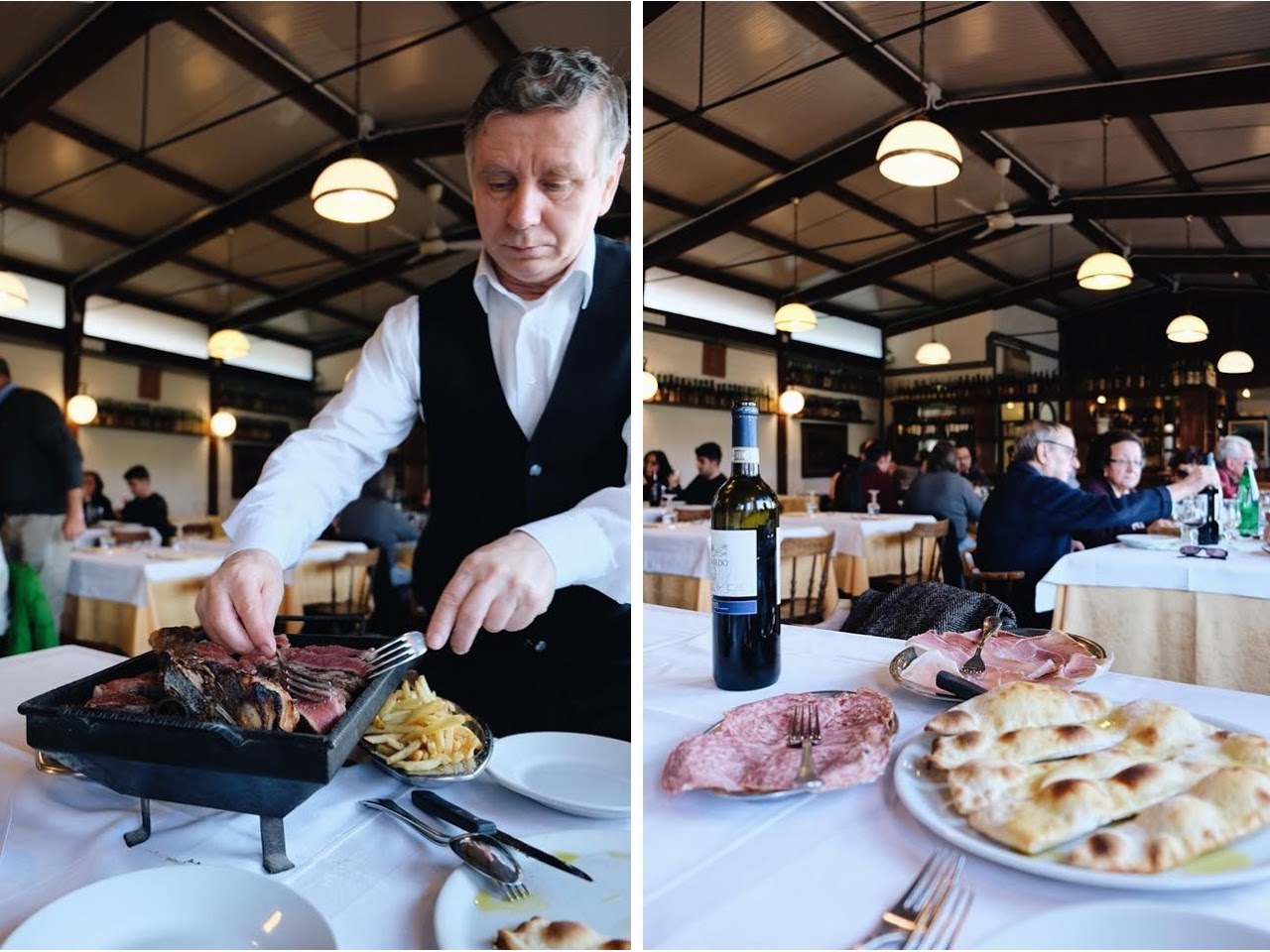 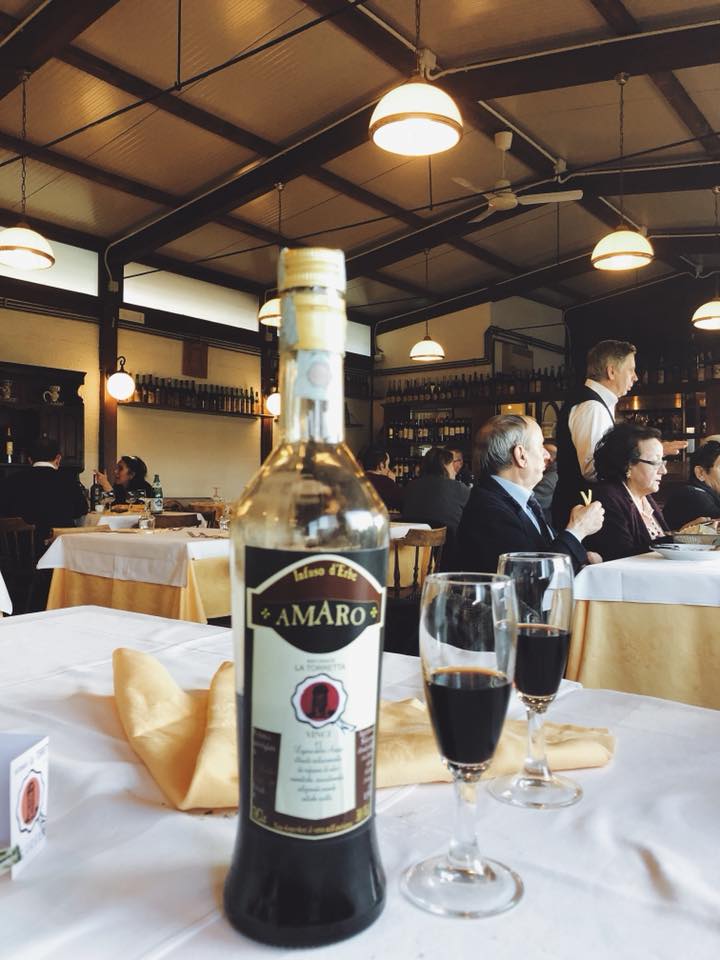 Quick Details – Before You Go

How to Get There

Vinci is an hour from Florence by car (Firenze-Pisa-Livorno) and there is no direct train or bus from Florence to Vinci, so you will have to take a regional train which stops in Empoli. From here, take a bus which heads to Vinci, ask at the bus station for bus schedules. 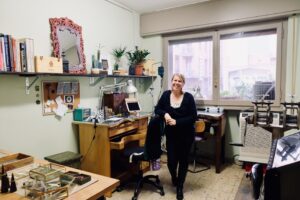 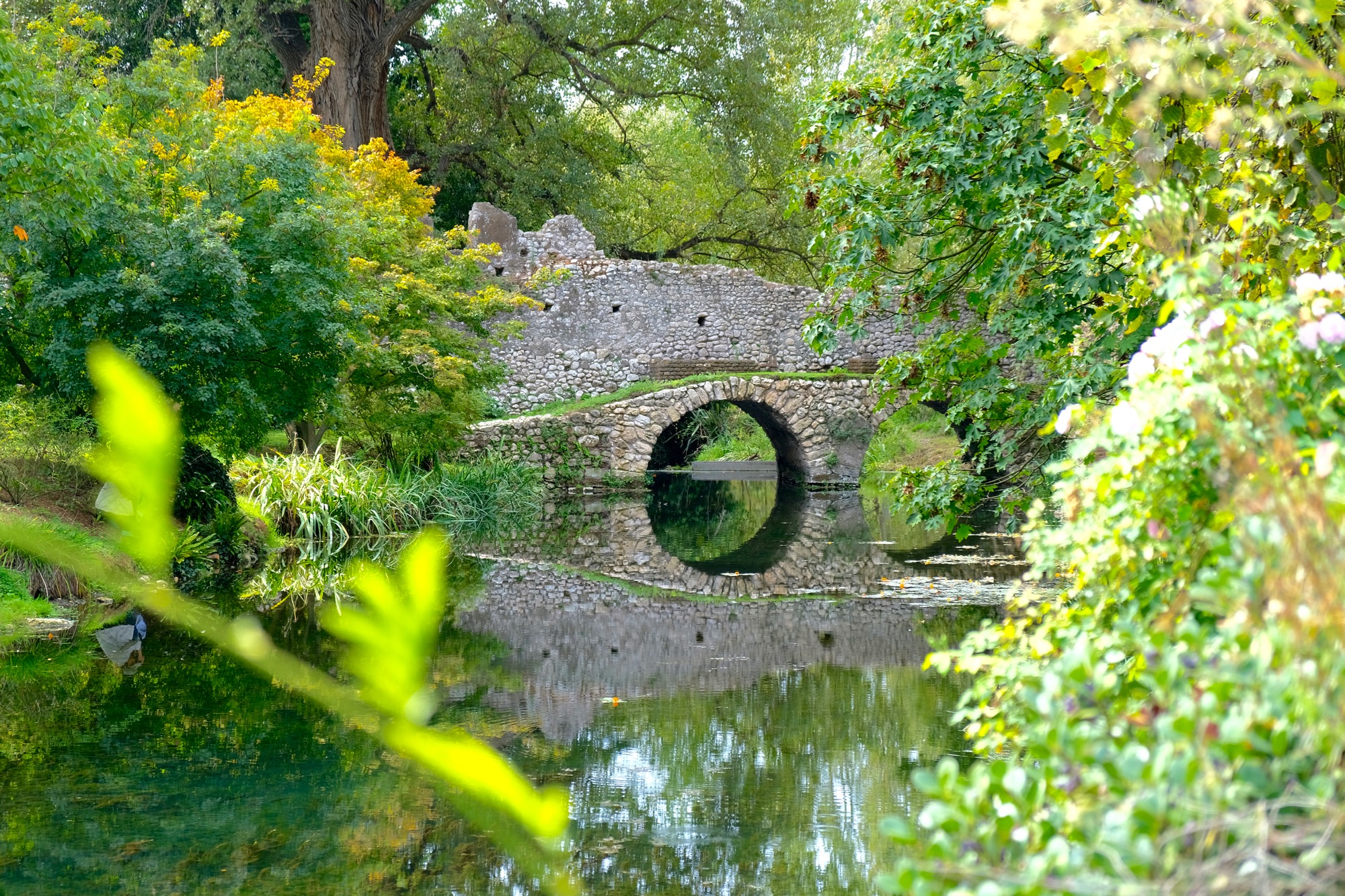 Lazio’s Most Enchanting Green Space: The Garden of Ninfa 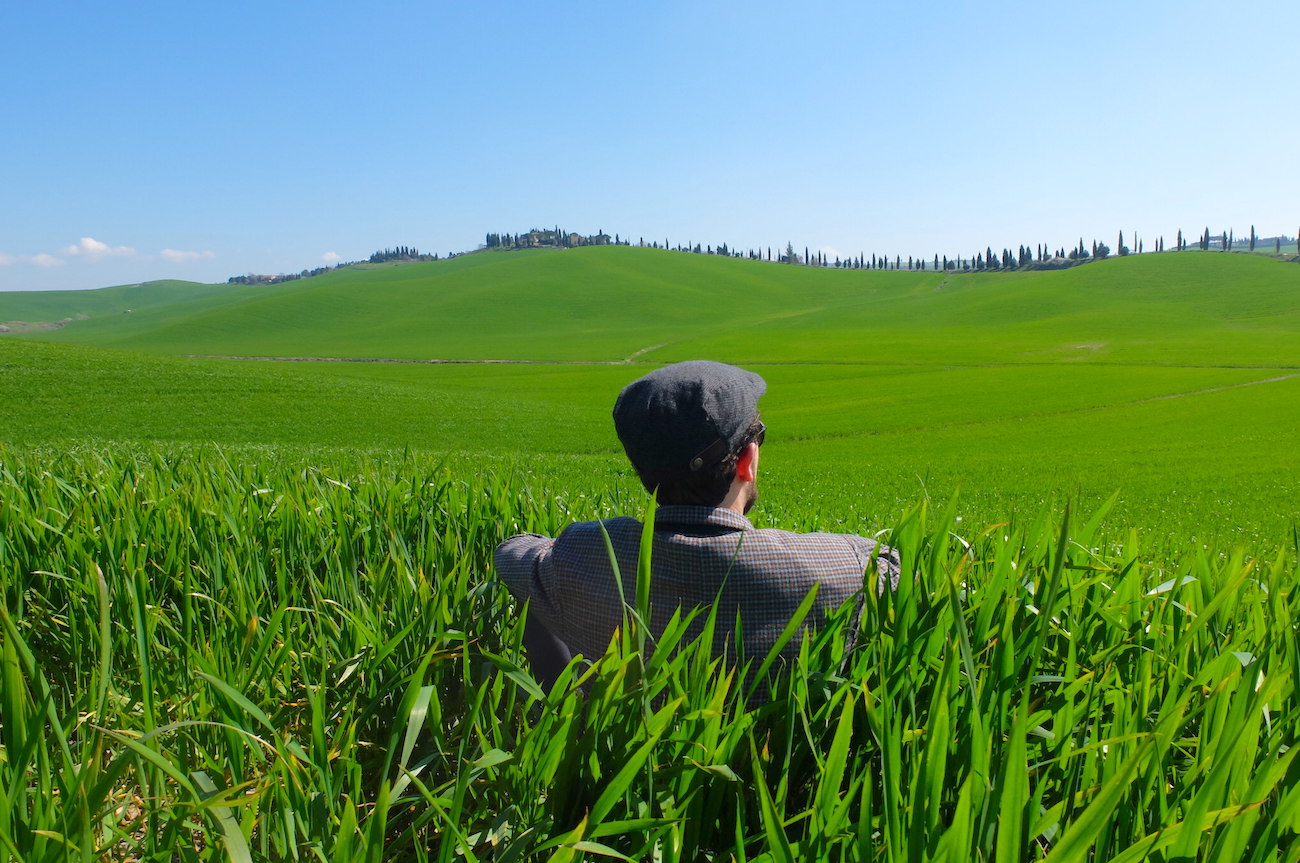