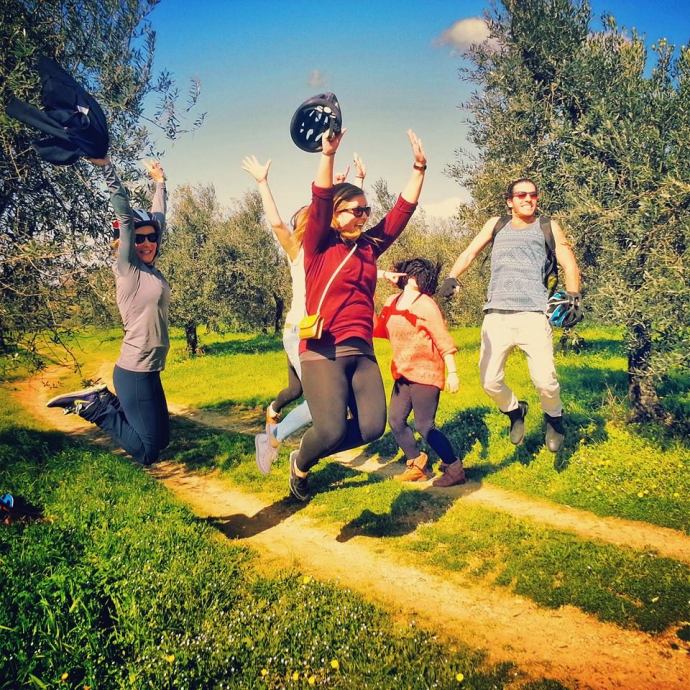 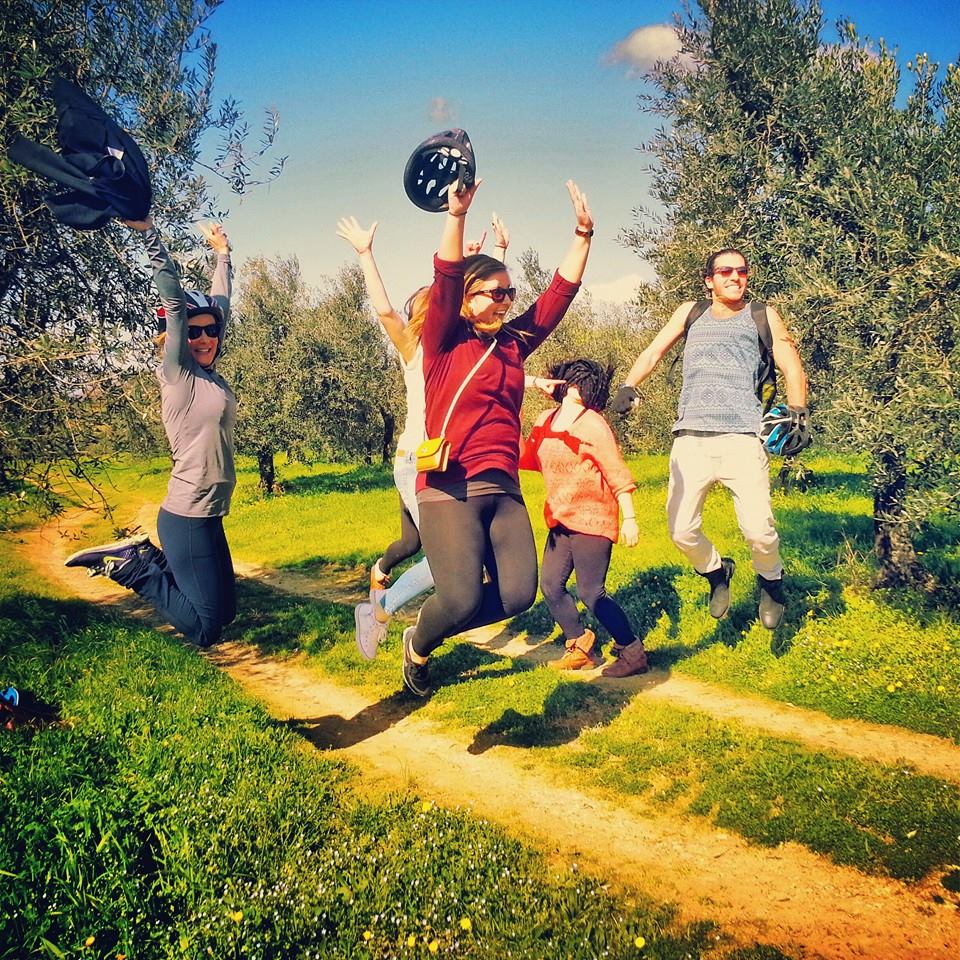 Jumping for joy for a gorgeous spring day escaping from the city is absolutely something worth getting excited about, even if I really can’t jump. People who are almost 5’10” really shouldn’t if I’m honest – falling means a lot further than that of someone who is 5’5” {that’s what I tell myself..}. Silliness aside, last Friday, I got to luckily tag along with Studentsville’s Whitney and some students from all over the world for a cool bike tour in the hills behind Florence with IbikeItaly – for their the first tour of the season.

Disclaimer – I am not a ‘cyclist’ – bike expert – or normally embark on leisurely 20 km rides or more every Friday, no spandex exists in my closet other than in the form of jeggings {I hate that word but why are they so comfortable?}. While I do love exercise, lack of free time and expensive gym memberships in Florence means that I usually try to be outside as much as possible in the summer but no ‘bikram yoga at 7am’ is really happening in my humble abode in the oltrarno.

We met up at their offices in the oltrarno to start our journey which was great for me since I live a hop, skip and a jump away. The sun was shining bright that day and when I woke up that morning – I knew I couldn’t miss out on a chance to get some fresh air and exercise, if anything to have an excuse to indulge in Taste food fair events during the weekend.

Meeting Bill, ibikeitaly owner, was a real treat, a friendly guy with a beard that we tried to convince him was vintage hipster. About meeting in the oltrarno: Bill said “I try to get people over to the other side of the river, often students and tourists are scared to venture here which is a real shame since there is so much to see (and eat), from hidden courtyards to ‘secret’ spots they normally miss”. I can really respect that since I do remember being a little nervous crossing over that bridge as a student knowing little to no Italian and feeling like you were entering another world where tourists started to diminish and real life was happening at that very moment.

Bill is one of those guys who has been living in Florence for over 23 years and has some stories to tell, which for me, is kinda awesome. He lived in Italy when getting a visa to stay was a lot easier and ethnic food options were none (so complaining expats longing for that brick of cheddar should be glad they weren’t living in Florence 20 year’s ago). I appreciate his optimistic outlook and enthusiasm for life, despite the hurdles of owning and maintaining a business in Italy, which can resemble a red-tape candyland.

Also along for the ride was assistant Dawn, a retiree that was more fit than any of us, a petite sweetheart who made the dream of living in Italy for a year really happen. She was a treat to chat with and already make the ibikeitaly family after advertising for a job in The Florentine.

A few of us got to ride in style to the departure point, nothing made my day happier than when I got to jump into Bill’s powder blue vintage Fiat 500 – appropriately named Tiffany {she was a sassy lass}. On the way up to the area surrounding San Casciano Val di Pesa we chatted about life, working in Italy and smiled at a few locals as we headed to the starting point to pick up our bikes, helmets, water bottles – gear for the day.

Whitney smiling while admitting she doesn’t own any tennis shoes

None of us were bike experts, so that took the pressure of any sort of Lance Armstrong type athletic abilities, but I think we were all nervous to be that person stuck on the bottom of a hill on first gear. Luckily the ride wasn’t too hard – being that we are in Tuscany, it’s not going to be super flat but we were on paved roads and if anything, it’s nice to work for your lunch. We happily rode away with several stops in between for picturesque photo ops along the hills.

While basking in the sun in one particular olive grove, Bill explained to use the process of harvesting extra-virgin olive oil. I appreciated his depth of knowledge everywhere we stopped, from the tips on olive oil 101 to spotting the villa where Machiavelli was once exiled and where he wrote The Prince one of his most famous books (if not the most famous, for someone like me who studied political science).

At a certain point we all pedaled with one goal in our minds – LUNCH! Yes, like any cardiovascular sport we were all in a hurry to replace our lost calories so we were more than happy to head to a Tuscan villa for a little lesson in wine-making before stuffing our faces.

Believe it or not that dish is cod!

Though we weren’t able to go to their usual lunch and vineyard spot because the owner was concerned her ‘flowers’ weren’t ready to show off [la bella figura never ends here does it..] We instead  toured Villa Le Corti owned by the Corsini family, Florence nobility naturally. They produce wine and olive oil, plus one of the gardens resembles a sort of green labyrinth which was stunningly beautiful on this spring day. We even spotted the duke when heading up for lunch. He looked pretty normal which really a lot of sense even if royalty conjures up an image of 18th century clothing and a sort of easy arrogance.

We tried some of the wine, everyone loved ‘ Don tommaso’ , a bold red wine, mix of Merlot and Sangiovese, easy to drink and worked perfectly with our simple Tuscan platters, pasta with ragu sauce, cured meats, cod. The stand-out dish was dessert, a beautiful beignet stuffed with ricotta sweet cream and an orange marmalade, it was heaven-and-a-half.

We somehow managed to get back on our bikes and the ride back to the meeting point was beautiful, easier than before lunch but we were all sweating by the time we arrived, a happy sweat that meant we earned the right to say we biked in Tuscany and didn’t need to do so in spandex. How much you say?

What’s unique about this bike tour company is that they are the first bike tour running in Florence, taking people out since 1993. I heard of them a few year’s ago when a friend of mine wanted to do a bike wine tour and they have a great reputation as being friendly, informative and very helpful to non-confident bikers, like myself.

An amazing way to get some fresh air, move those legs (literally) while discovering some absolutely beautiful areas outside of the city, and your back in town by 5pm – score! You will have something to brag about for days on Facebook: oh, I should go to bed early because I just biked 15 miles in Tuscany or carb attack about to happen – just took over Tuscany by bike! 😉

Our took was the classic Tuscany full day tour which lasts from around 9:14 am to 4:30pm, meeting in the oltrarno. Via their site, it is described as an Easy to Moderate bike ride in the Tuscan Hills just outside of Florence with a visit to a private estate winery with wine and olive oil tasting, and a delicious lunch. Think around 15 miles round trip, moderate was a good description, there are some hills that will make you deserve that pasta. Prices: 84 Euro pax and for students: 75 Euro pax, you can see a list of more tours here. Read up on the FAQ’s before you go.

*Disclaimer – I was hosted by ibikeitaly but trust that all opinions and thoughts 100% are my own, plus I paid for lunch ;-). 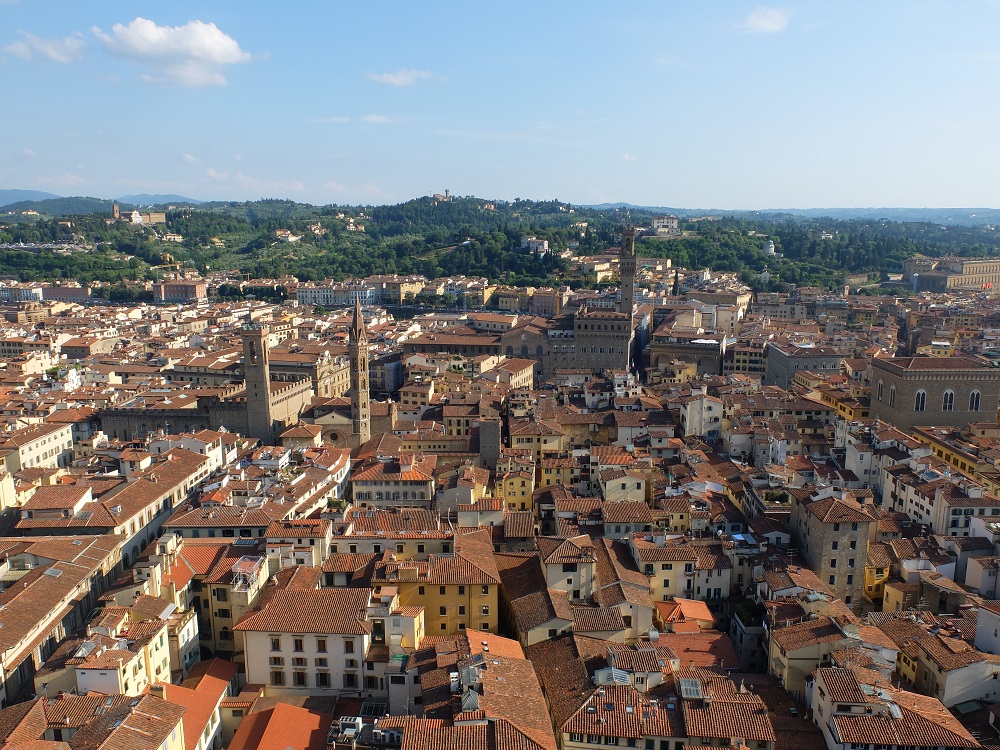 Instagramming Florence: The Birth Of #YourFlorence 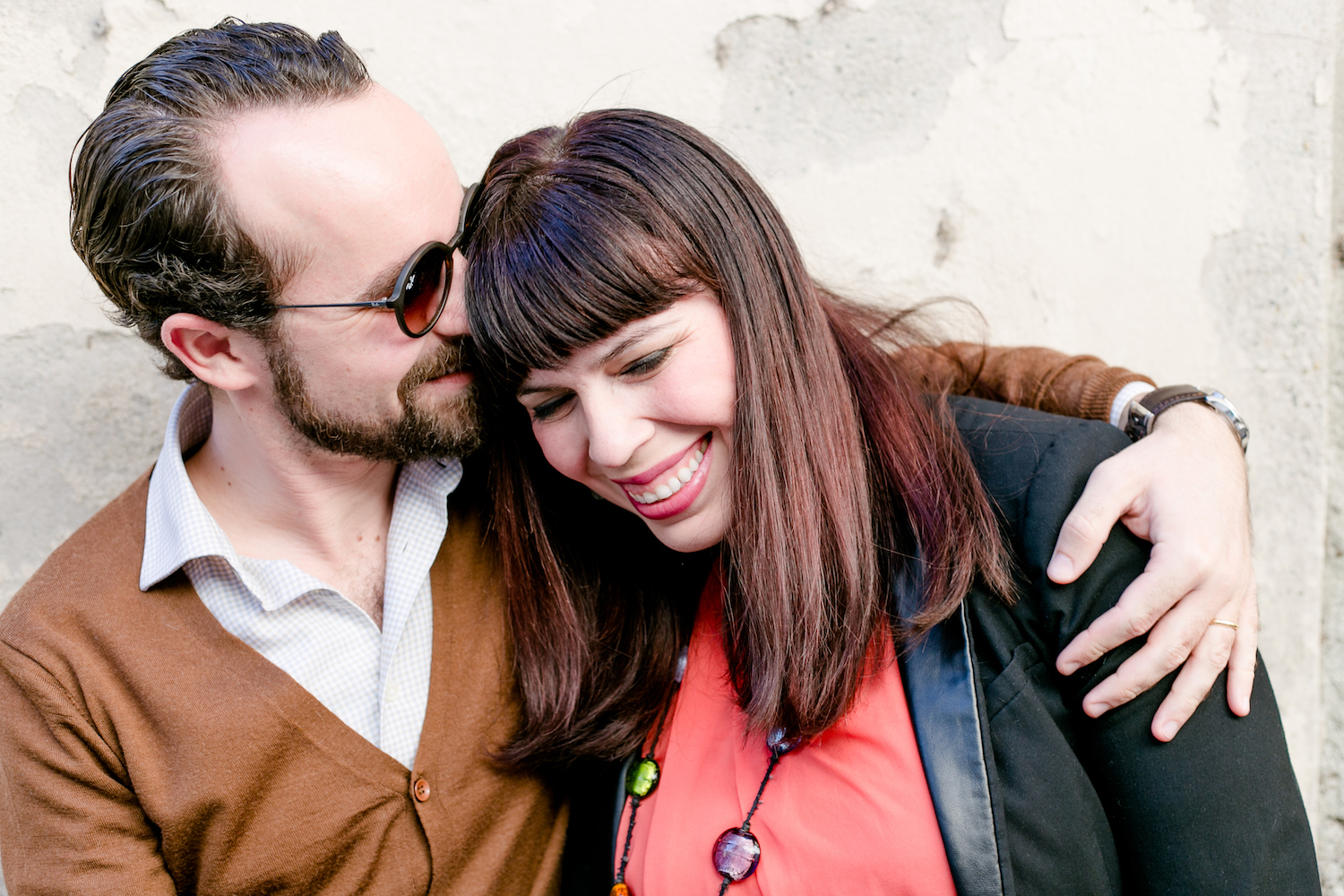 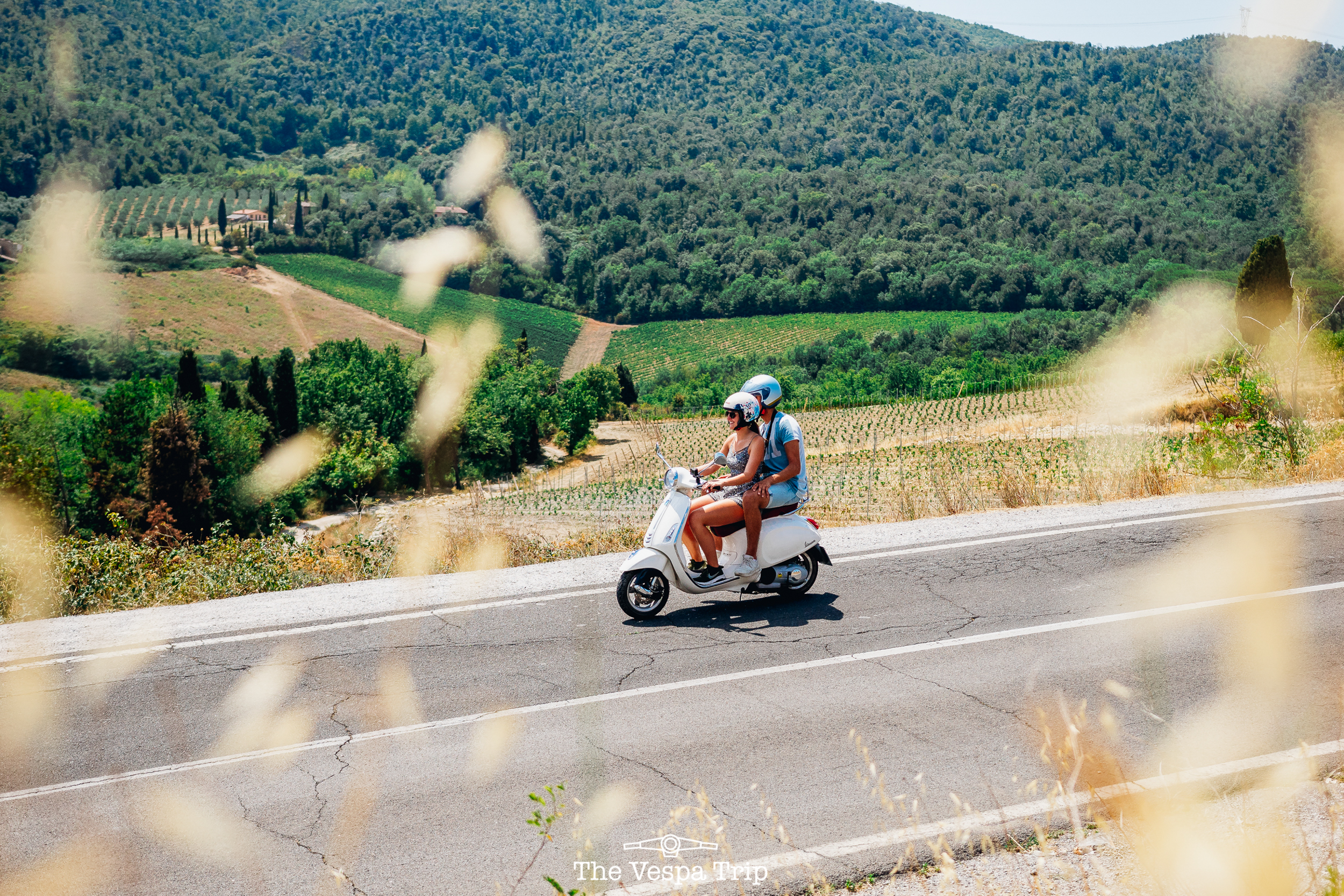