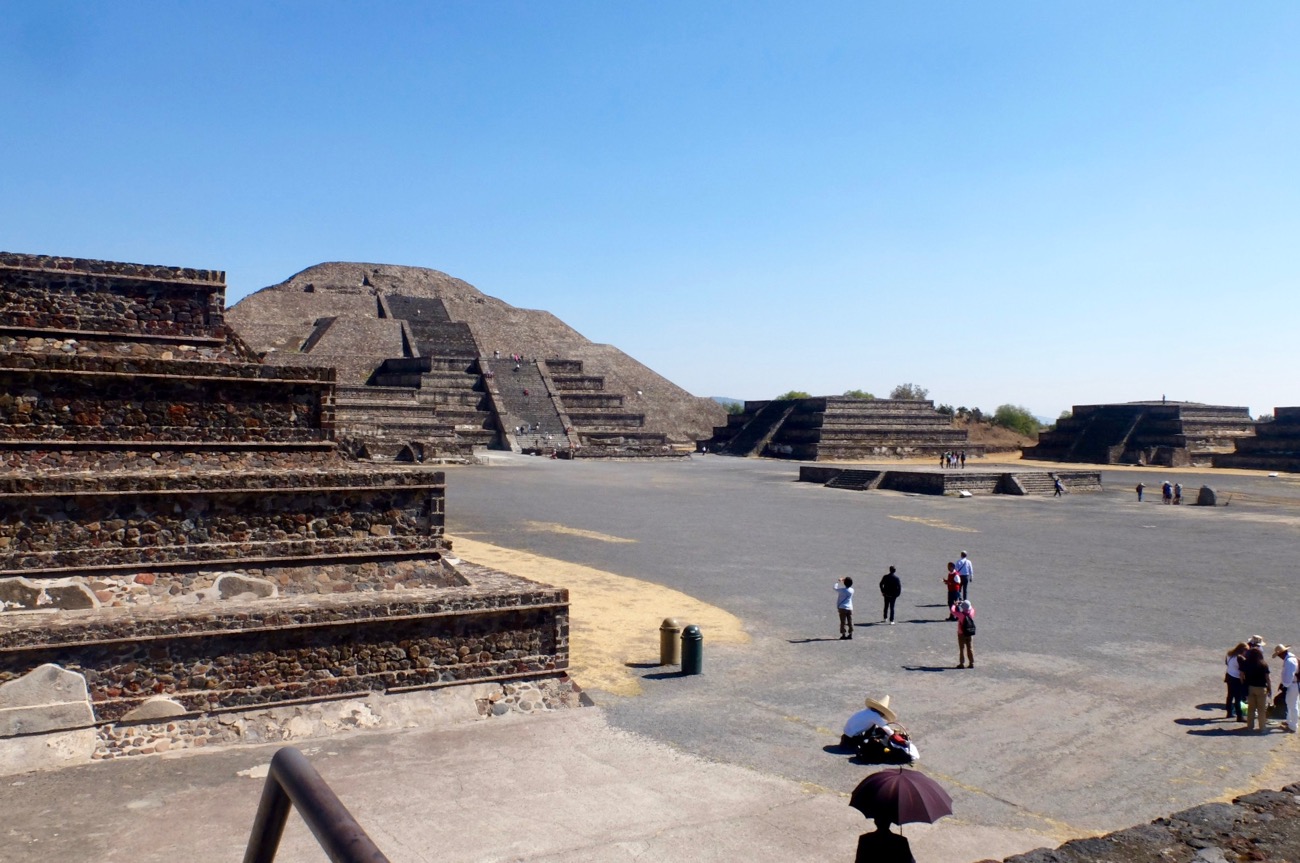 Those Who Came Before Us: Exploring Teotihuacan From Mexico City

“Look over there” Nadia pointed out. Her finger stretching towards the window of our van at a hilly landscape dotted with colorful houses, many of which seemed stacked on top of one another. “this is the neighborhood of Ecatepec.“ This, the densely populated suburb of Mexico City, marked as a place both poverty and crime ridden but a place also of richness and culture. It made International news when Pope Francis came to visit in 2016, there he famously decried Mexico’s corrupt elite calling them “a society of the few and for the few.” Most of the buildings were a uniform grey, making them almost blend into the hills, the paint was part of the attempt to make the neighborhood nicer for Pope Francis, along with clearing the streets of the homeless and stray dogs. A temporary coverup or a glimmer off hope, it just depends on who you ask.

This impressive feat transporting up to 18,000 people a day, from home to work, to school, avoid a pollution-filled commute as best as possible. A step in what hopefully is the right direction for one of the country’s most dangerous places to live. This was something I wasn’t expecting to learn on my way to one of the most popular sites to visit near Mexico City but I was glad to be there. Not just a tourist enjoying an outing to a famous city but also a chance to better understand the complex layers of a place where 21 million people call home.

We were on our way to Teotihuacán as part of this year’s Mexico adventures, this site was formerly Mesoamerica’s greatest city and it is one of the world’s most important archaeological sites. I had found Nadia through a great website called “Tours by Locals” where you can hire a private guide for any number of cities around the world. Prices range around 200-300 USD which includes the tour for 4-5 people, van pickup and drop-off at your hotel and most of the tours range around six hours.

I knew we could go on our own as I had read this post by The Girl and Globe on how to get there using public transportation but I didn’t want to be staring at a guidebook, not really understanding the place I was in. Since I started the blog around 2012, I have truly seen the value in partnering with guides or tour companies to get a one-on-one education about a place but also to meet someone local, which is almost even more interesting than the tours themselves.

Of course, this was no exception, Nadia was a character and so fun to be around, she must have carried enough snacks to munch on something each hour of our tour and her voice mirrored that of my mom (who is also Mexican). It was like being around my mom’s family and Nico and I both instantly felt at ease in her company.

Well, anything can happen after tequila.

The Lost Civilization of Teotihuacán – The City of the Gods

One thing you need to know when visiting Teotihuacan is that the place is shrouded in mystery. There is a lot we don’t know about the ancient civilization who based here hundreds of years before the birth of Christ. Naturally there are clues, but there are just as many unanswered questions, especially asking why and how they left. In fact despite the immense size of the place, this is just a fraction of what it was during it’s golden age in A.D. 400. Being that the origins base from the Olmec people, because it was one of Mesoamerica’s earliest civilizations, they still don’t know a lot about the origins of why they chose this place to call home.

Some say its first inhabitants were refugees fleeing the eruption of the Title volcano from the valley of Mexico to the south, it was an ancient melting pot of people who for a long time, maintained a peaceful residence aligned to the tunes of the sun.

The people who lived there were considered to be relatively peaceful, artisans, potters, farmers. Ceremonial platforms were built here to honor their gods and it was thought that the people believed that animals could talk to people. An unlike Christianity, snakes were not considered the enemy, but rather sacred, it also took on a negative connotation with the arrival of the Catholic Church.

Once you get there it’s easy to be mesmerized by the immense pyramids that have been here throughout centuries, the surrounding area is both acrid and flat and dusty. Hard to believe its bustling self when Mexico City was still a myriad of islands.

We set off on Calzada de los Muertos: The Avenue of the Dead which connects the Pyramid of the Sun and ends at the Pyramid of the Moon, and the Templo de Quetzalcoatl, which was the main administration center and home to the ruler. Here Nadia pointed out many shapes and symbols, all related to natural elements (water, wind) all showed an important tie to agriculture, these elements making or breaking the lives of its citizens.

Nadia explained as we continued on that most people lived outside of the ceremonial temples yet people’s lives were surrounded by rituals. Women giving birth for example would be given a steam bath right after, something I would have expected to hear from the Romans, who simultaneously were taking over Europe.

Walking up the pyramid of the sun is quite a feat, it is the world’s third largest pyramid and we managed to huff and puff our way up to the top (living on the third floor of a 14th century apartment has trained me well for this). Once we reached the top of the Pyramid of the Sun we were rewarded with a beautiful view of the avenue of the dead and Pyramid of the Moon. Everyone felt like they accomplished a feat, those steps weren’t for the faint of heart and it probably wasn’t the best idea I’ve ever had to wear a skirt on a windy day. But we made it, and it was marvelous.

Nadia stopped for a second to pull out a small notebook and scribbled furiously. I imagined she anted to write down a task she didn’t want to forget, but at a certain point she asked if she could read me a poem. In that moment, she managed to write a few lines of what it felt like to be there, the pyramids attracting the spiritual sort and Nadia being no different. 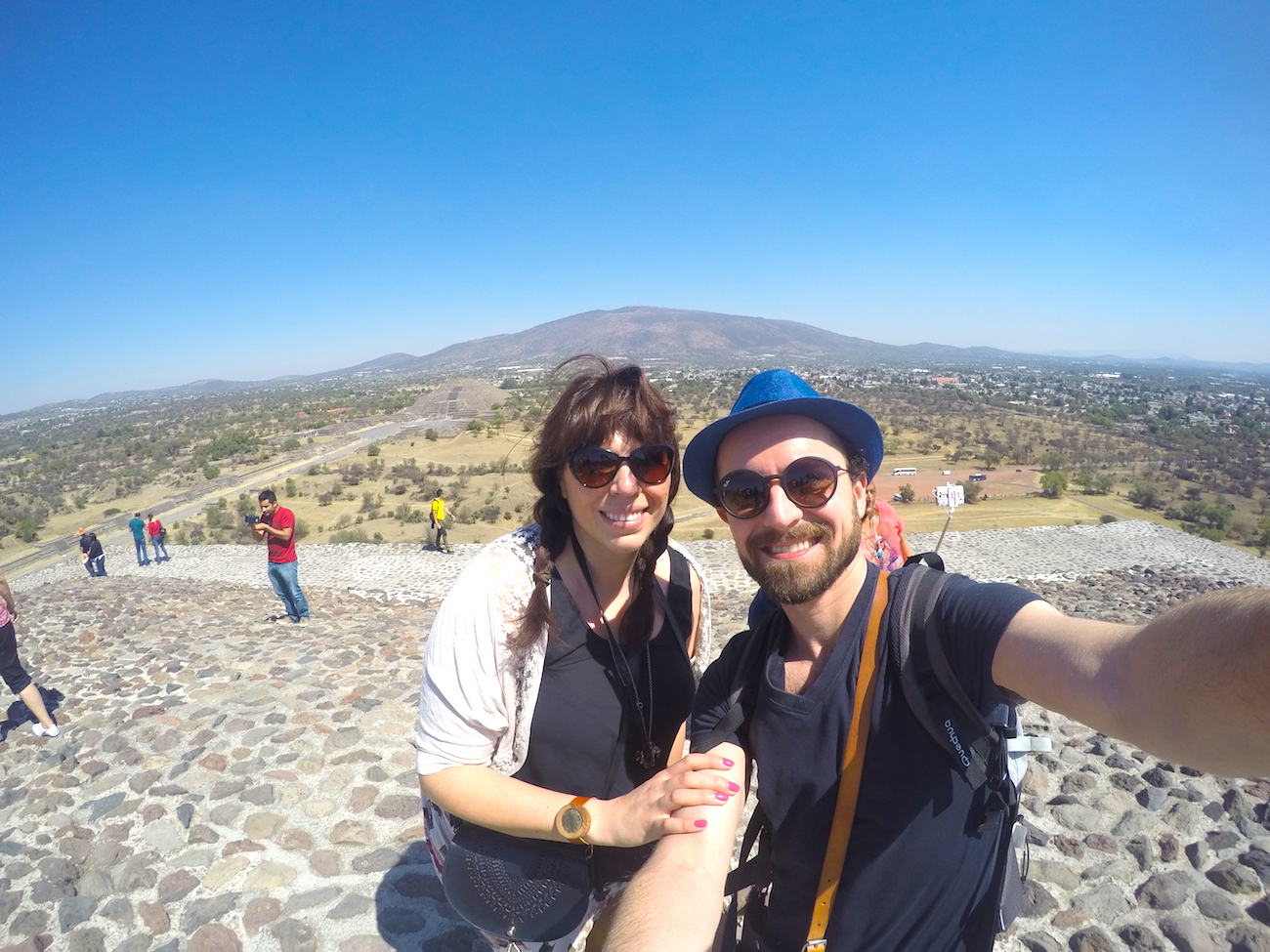 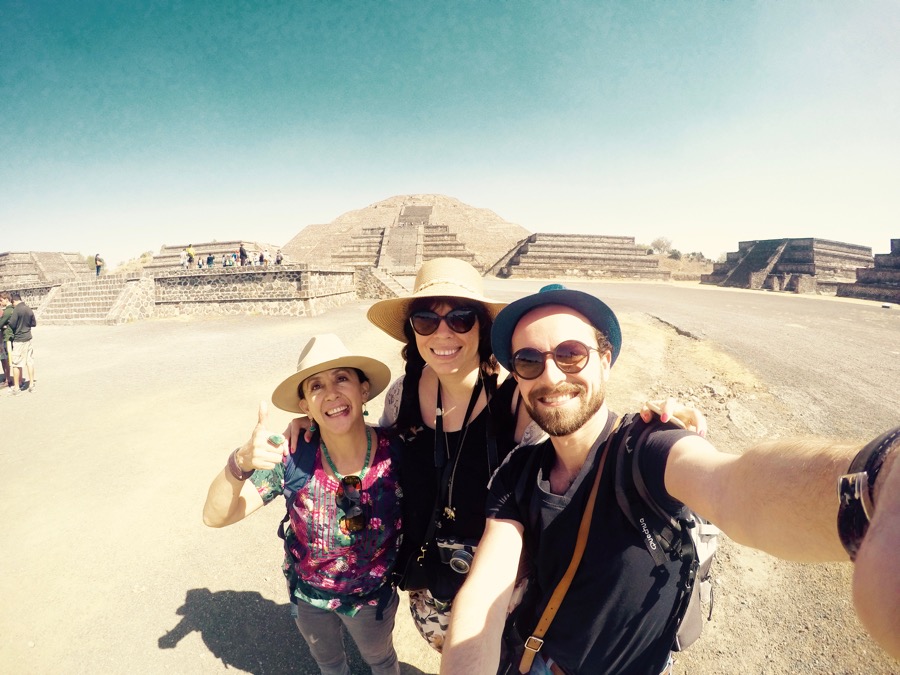 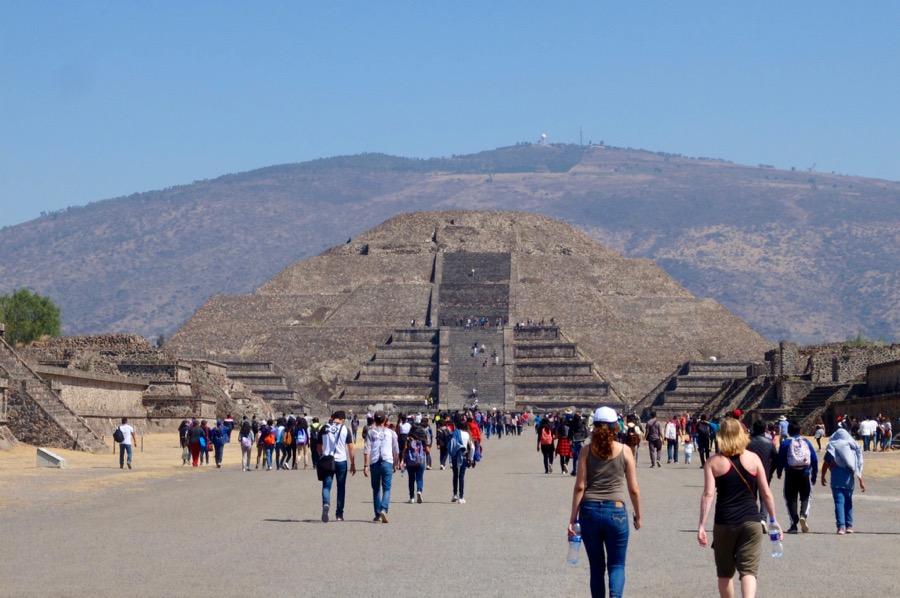 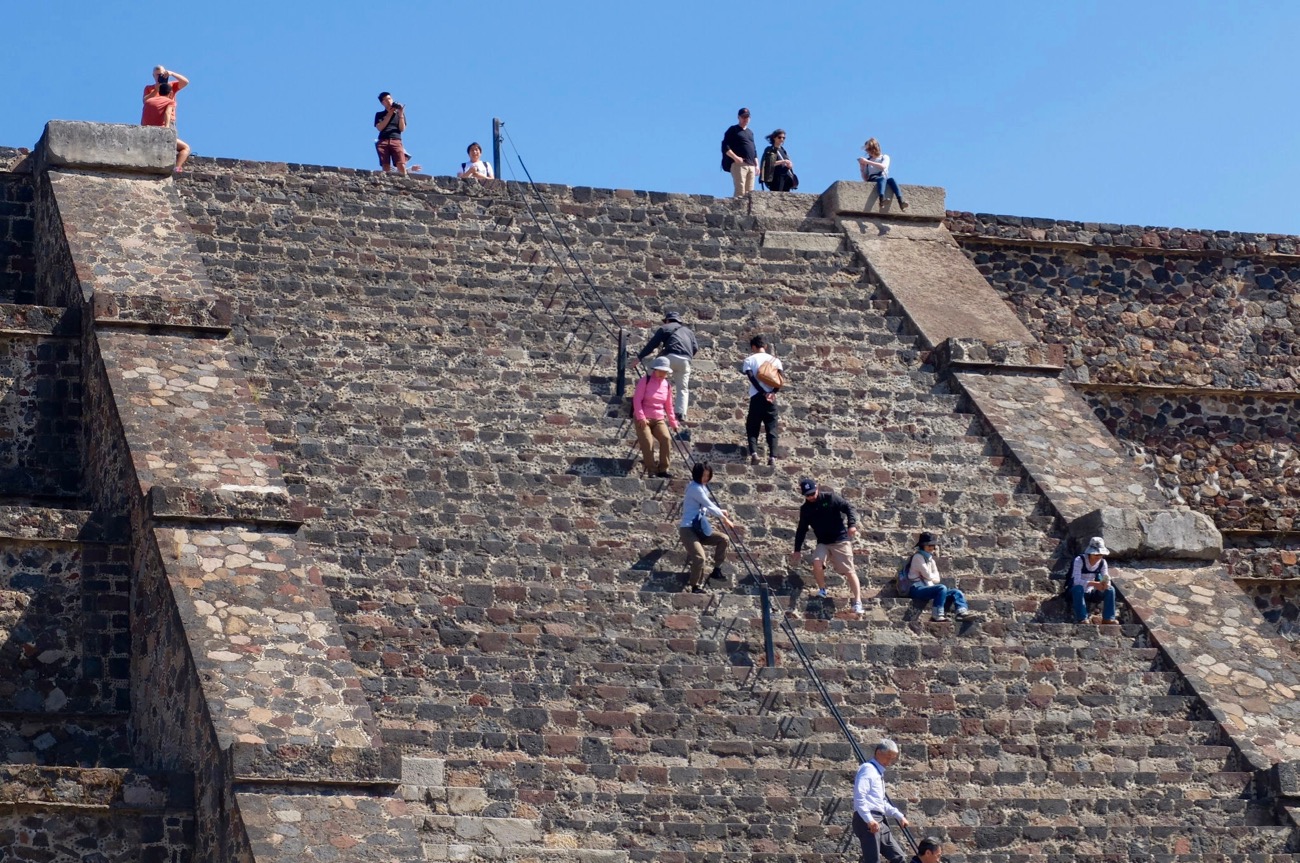 Along our journey of ancient Mexican civilizations we stopped for an art demonstration (you’ll spot several vendors here in wide-brimmed sombreros) where they showed us how they get natural paint from plants and bugs which apparently have healing affects for the skin too. 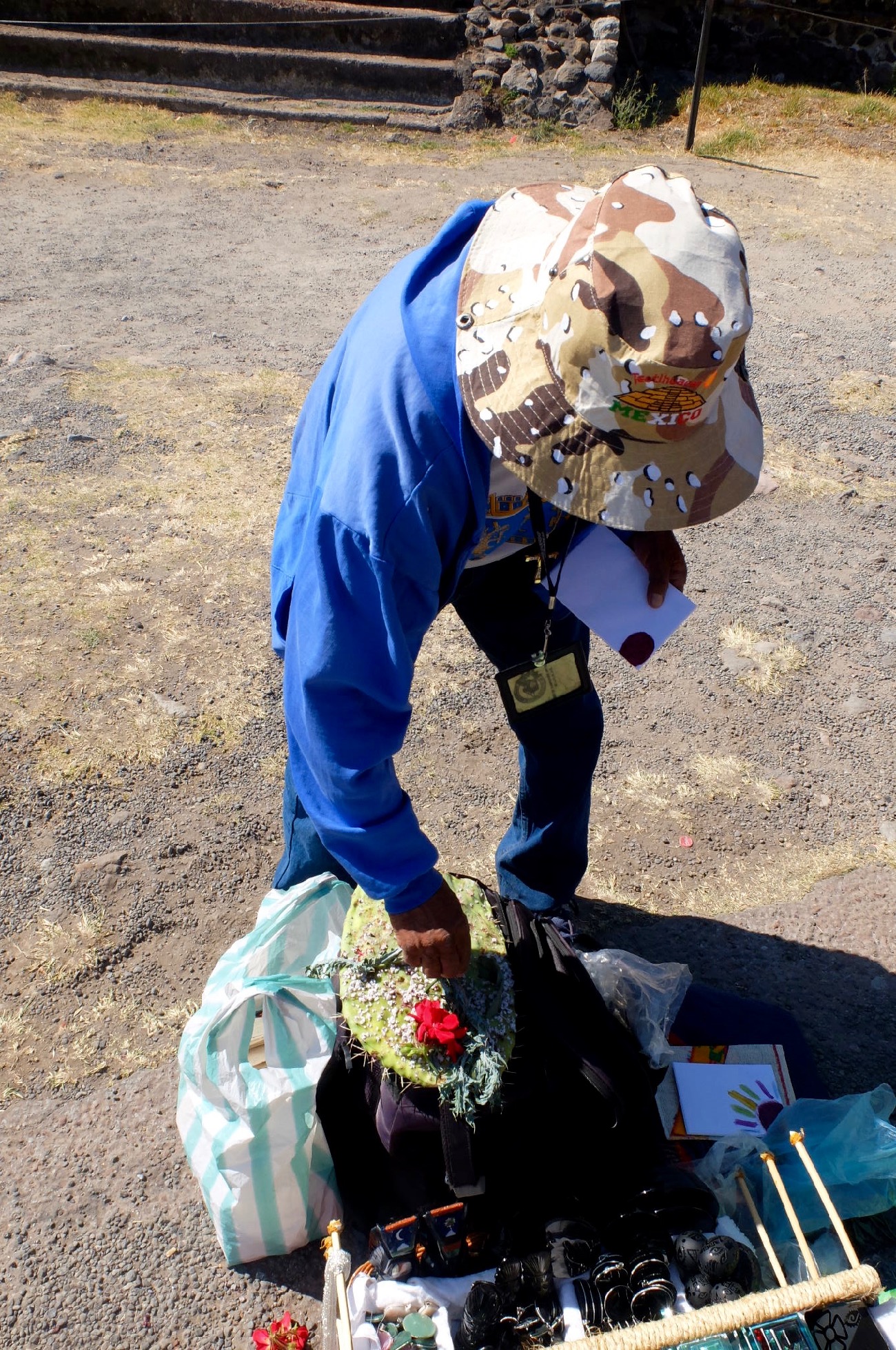 We winded down the trip with a visit to a nearby agave farm where tried a few local drinks, including pulque, a frothy white beverage of the Aztec gods which predates the arrival of the Spanish by at least 1,500 years. This is ancient ancestor of mescal and tequila and is made by fermenting the sap of maguey (agave).

Afterwards, we tucked into plates of guacamole and sautéed cactus, a local specialty, chatting easily with the driver and Nadia, both oh whom were just as curious about us as we were of them. At a certain point, a girl in traditional Mexican dress comes out with a boombox and launches into song, her strong vocal cords a testament to what I am certain is daily practice. I was happy to leave a few pesos just to hear her marvelous song again.

The perfect finale to a beautiful day, after all visiting the city of gods does wonders to work up quite the appetite. 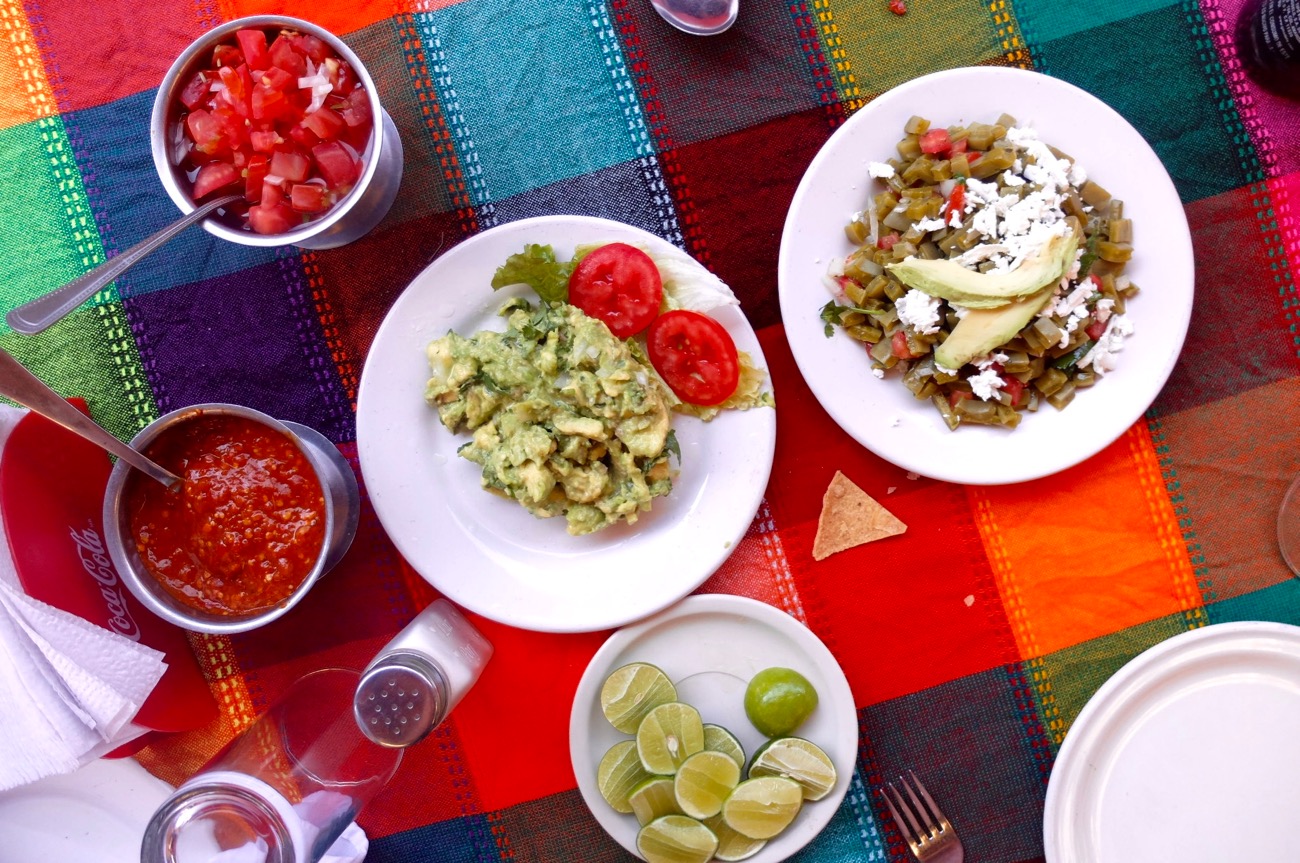 Disclaimer: I was hosted by Tours by Locals for this day trip tour, all opinions are 100% my own and I have used/paid for their services many times in the past.