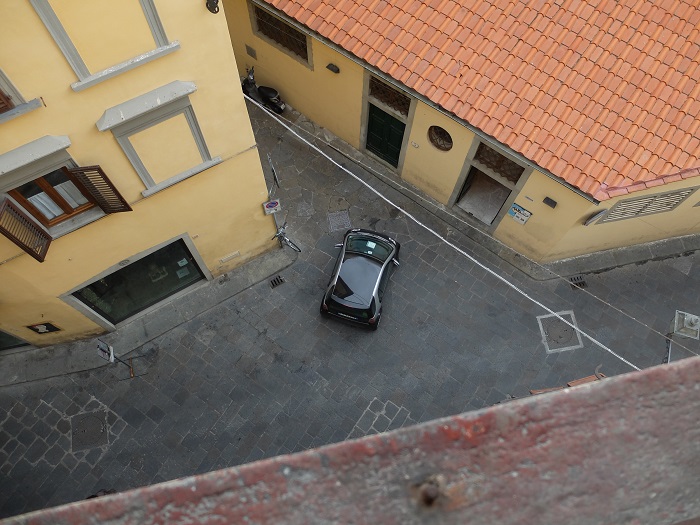 È Così, Life Next to a Public Bathroom

Our blogger round-table discussions are back, and the COSI team is tackling a subject that might seem strange to most, the concept of  ‘the bathroom’ in Italy. Personally I thought what better way to beat the ‘rientro’ (return to work blues) by chatting about something we use every single day, but never talk about. Unless you’ve visited the Venice train station’s bathroom with two steps and a hole (we’ve all been there- I first saw this in China).  Ironically when I tell people where I live in Florence, I am proud to say what area of town I live in ‘the oltrarno’ or ‘other side of the river’.  But if I wanted to keep it 100% real, I say that I live right in front of a public bathroom, where tourists pay 1 euro to relieve themselves, next to a piazza that is synonymous with a woman’s body part, piazza della passera.

The other day I was walking home with Nico and our dog Ginger when some girl’s stopped us to ask for directions to piazza della passera, since we were headed home I told them to just follow us. Chatting with the girl about visiting Florence, she mentioned that when she asked other people where ‘piazza della passera’ was, they often got a giggle – well naturally!

The amount of times I’ve gently explained why this is so, could be counted on twenty hands and some change. On the flip side, living in this area means that I often get a window on what life by a public bathroom is like. I see weary tourists sitting on the sidewalk next to the bathroom, taking five minutes to wipe their brow and change their camera battery. I see street performers stroll down via dello sprone playing music and asking for money from the tourists waiting for the bathroom, I see it all. I give people directions, I furiously search through my purse for my keys as 10 people look on, I’ve almost called an ambulance. My dog sometimes pees in front of the public bathroom. I consider it somewhat of a second home and have a fond relationship with the people who work there.

One thing I find fascinating is different culture’s approach to talking about well, using the bathroom. I find Italy a country very open to talking about what goes down in the most private of places. While you may never know the secrets of a long-standing family feud, you likely will know how your Italian friend digested a meal. In order to best sell a packet of cookies here, add a photo of the intestinal tract. In the USA I definitely saw more “poop-shyness”, people who would ‘hold it in’ for hours as to not use a public toilet, some definite phobias.

I recently read a wonderful article from The Atlantic titled “The Private Lives of Public Bathrooms – How psychology, gender roles, and design explain the distinctive way we behave in the world’s stalls’ . Apparently as recent at the 1800’s, the notion of privacy in the bathroom was a new concept at best. They mention a special exhibit that blurred the lines between public and private by  Italian artist Monica Bonvicini’s 2003 sculpture “Don’t Miss a Sec”—a usable public toilet encased in one-way glass installed outside London’s Tate Britain gallery. Passersby could not see in, but the person using the toilet could see out. I would be game for it (maybe) but it did have me thinking.

The article also touches on what happens when we separate bathrooms by gender and what it means about us. Via the article “This shines a light on what it means for men and women to be exclusively in the company of their own sex,” “For women this is often liberating; for men it’s often anxiety-inducing.” I could see that in a world where no man I know giggles and grabs their friend’s hand to accompany them to the bathroom for a private chat. Seriously, you have to read this article!

A few year’s ago I thought about writing a post about where you can go to the bathroom in Florence without paying a dime. Technically anyone can walk into a bar or restaurant and ask to use the facilities though I know it’s awkward to do so without buying anything, I normally get a coffee. I always recommend that people try this at places with outdoor seating which makes it easier to seem like you actually ate or drank at the restaurant. Trust me, it works! Always and I mean always, carry a packet of tissues with you in Italy since toilet paper in bathrooms can be optional. Plus you will understand why many of us ‘locals’ tend not to wear really flat sandals after you’ve visited a few of the busiest latrines.

There are a few places, like the Mcdonalds at the train station, or department stores like la Rinascente in Piazza della Repubblica and Coin which have bathrooms, often hidden on the top floors. But the last few times I have gone, they have been filthier than that of student pub Lion’s fountain, where I have seen some truly horrible scenes. Not quite like the movie Trainspotting but close. I’m not sure what happens in these bathrooms, toilet paper strewn everywhere, a stench that can stick your clothes all day, it can be pretty bad and makes spending a euro for a clean place to go, well worth it.

Enough about toilets, it’s your turn. What has been your experience on how different cultures see ‘using the bathroom’?

See what my COSI counterparts have to say on the subjects of Toilets, a fun way to start September with a little ‘dare I say it’ Potty humor..